Rocks in My Head 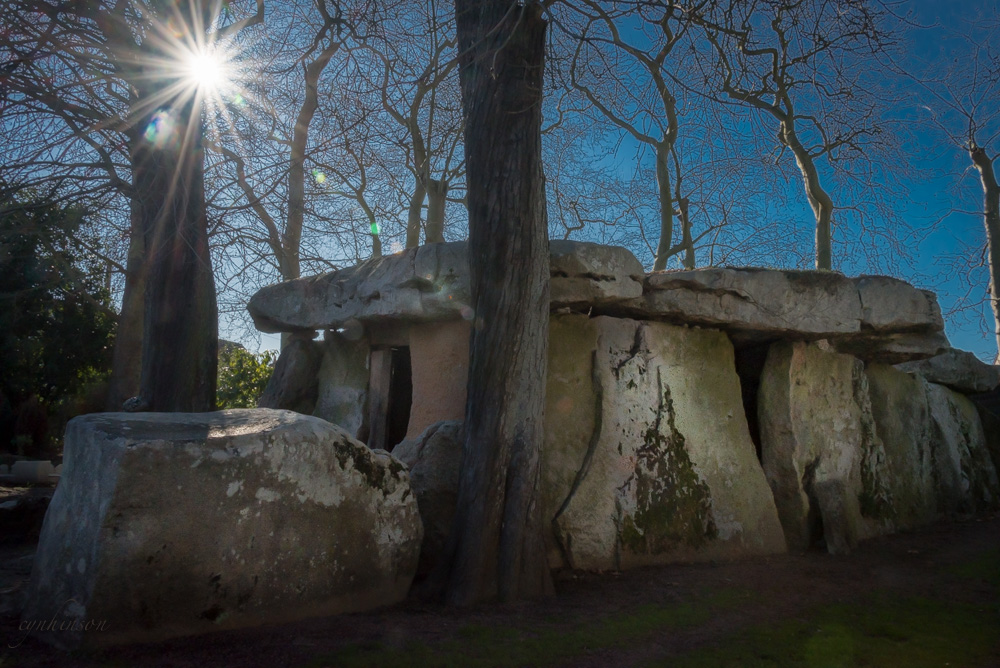 We recently spent a long weekend in Angers, a lovely small city in the Loire Valley that we thought might be an interesting place to live*.  While planning for the trip I took a look at the Michelin map to figure out the most interesting route. Now, you have to understand that the Michelin maps are much more than simple road maps. In addition to showing all the highways and byways of France, they point out such interesting sites as silos, (Silos? Bruce and I are still discussing the reasoning behind this.) bridges, chateaux, factories, abbeys, war memorials, spas, ruins, picnic grounds and dolmens. You’ve got to love a map that includes dolmens.

What, you might be asking, are dolmens? Simply put, they're rooms or chambers made out of huge flat rocks. They’re found in nearly every European country and as far east as China and Korea. Built during the Neolithic period, the oldest dolmens in Western Europe are about 7000 years old. Archaeologists aren’t exactly sure who built them or why. Most are oriented on an east-west axis and therefore have some connection with the rising and setting sun. Human bones and artifacts such as pottery shards have been found inside some chambers, leading one school of scholars to believe that the dolmens served a funerary purpose. Others believe that this is not the case; the bones often date to  later periods, indicating that the chambers were re-used as tombs, long after their initial construction. In the case of the Loire Valley dolmens, no bones have been found at all. It’s these mysteries surrounding the dolmens that make them interesting to so many people, myself included. 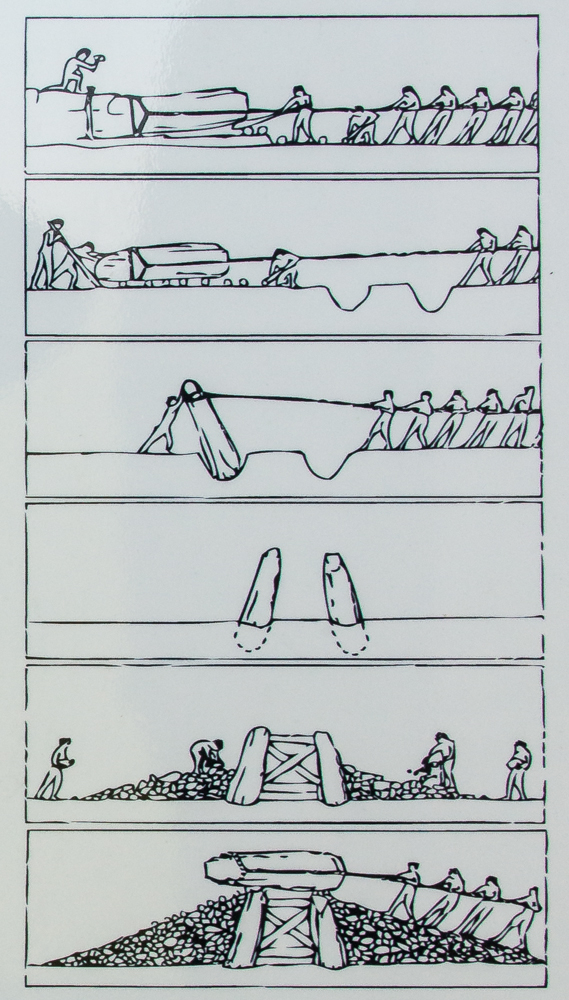 I’m not only fascinated by why prehistoric men built these chambers, I'm also intrigued by their ability to erect them. After all, it was an enormous undertaking to quarry rocks without metal tools, transport them several kilometers without wheels, and finally, to build with stones weighing tens of tons. No doubt the process was back-breaking, but the concept was really quite simple. First a hole or trough was dug in the ground and then a large, flat rock was pulled into this channel and maneuvered until it was roughly vertical. Dirt was piled around the stone to sufficient depth to anchor it in place. Once the ‘walls’ were constructed, dirt and rubble was piled against the sides to create an inclined ramp, the slope of which allowed the enormous capstone to be pushed or pulled into place. Although the chamber was usually then covered in rubble so that it became an enclosed barrow, the Loire Valley dolmens are puzzling to archeologists because they show no signs of having been covered.

During one of our first trips to France we stumbled across an enormous dolmen entirely by accident. Somewhere north of Toulouse we followed a small “dolmen” sign pointing to a narrow path. We climbed until we arrived at what I thought much surely be one of the few remaining dolmens in France.

But, boy, was I wrong! There are, in fact, over 4500 dolmens left in France. Although many are located in Brittany, they can be seen throughout the country and my handy Michelin map showed a dozen or more in the area around Angers. So, instead of touring the famous chateaux of the Loire Valley, Bruce and I spent a good part of our weekend searching for dolmens.

Our first find was Les Dolmens d’Arlait, three stone structures constructed in a triangular pattern, each about 100 feet apart. Originally constructed in about 4500 BC, archeological evidence shows that these dolmens were reused about 2000 years later. Unfortunately, only one of the three remains intact.  Later that afternoon we found two additional structures, the largest of which was sitting out in the middle of a field. The farmer has obviously plowed and planted around it, respectful (or possibly resentful?) of its status as an historic landmark. 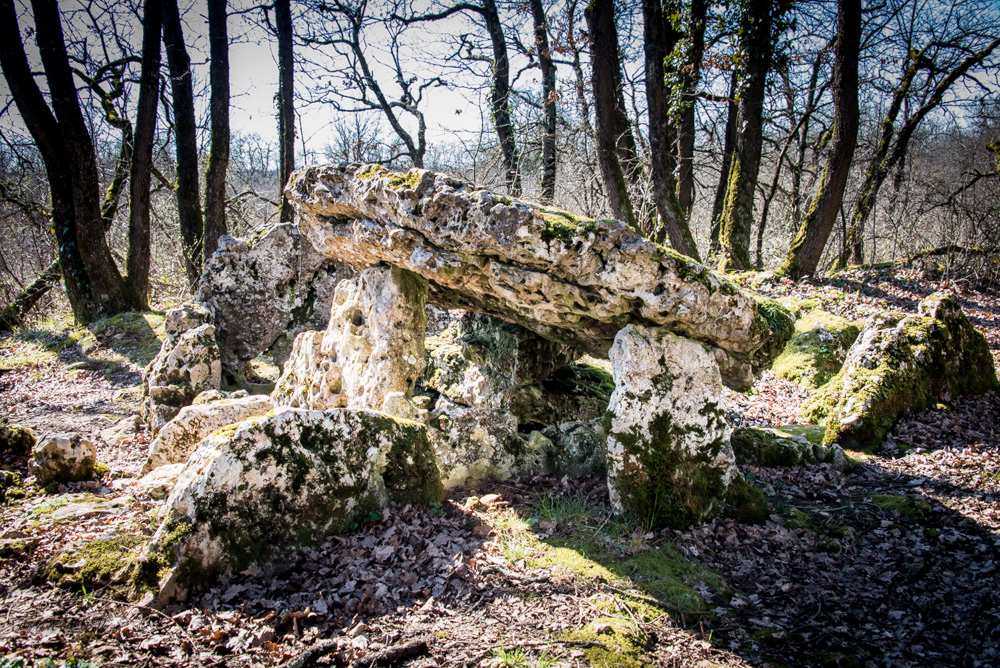 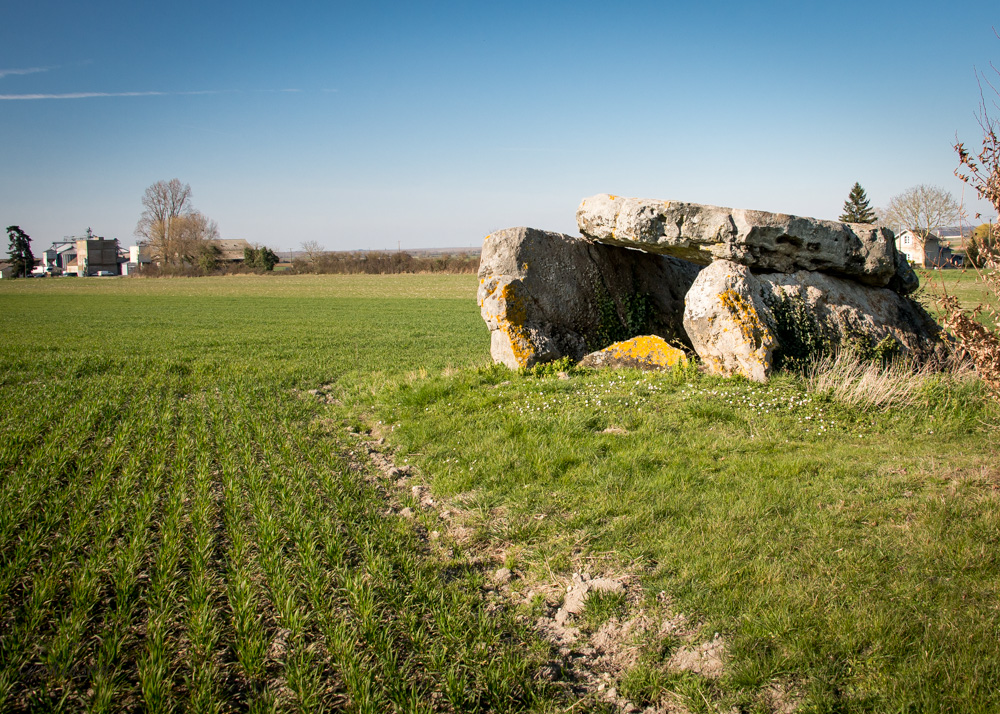 On our second day of scouting we found a smallish dolmen sitting in the middle of a plowed field. Shaded by scrubby trees, it looked for all the world as if it was awaiting a passing gang of druids. In the adjacent fields were several other piles of stones, making us wonder if these too had once been dolmens. 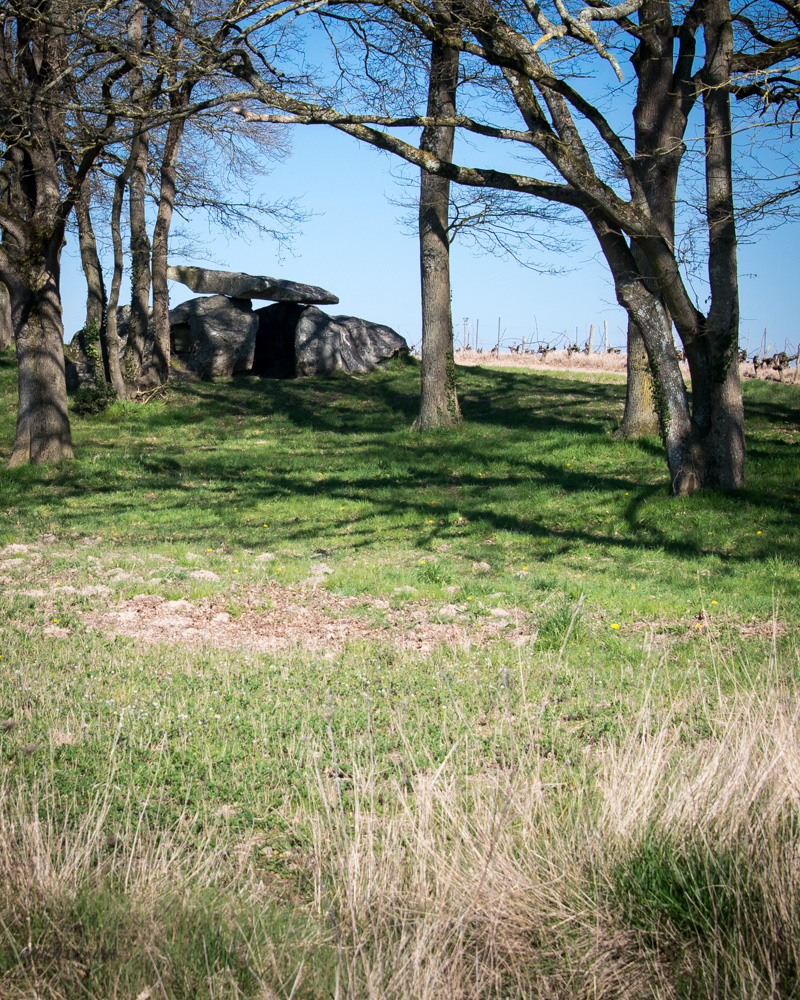 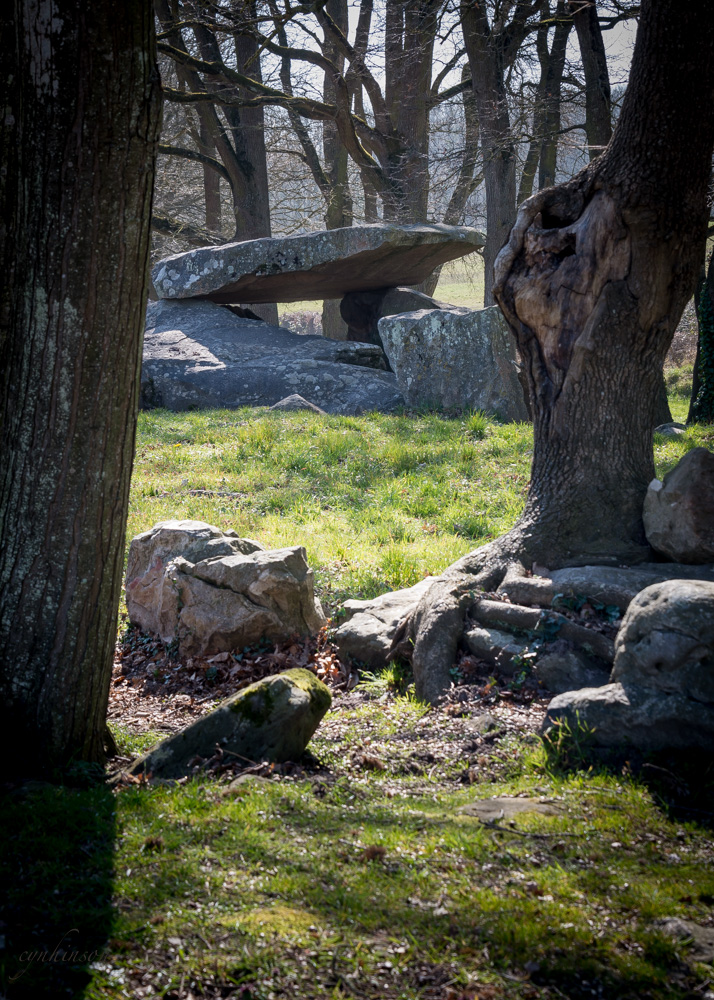 Not far from here we found the spectacular Dolmen de la Bajouliere, the second largest in Anjou. Constructed about 4,000 years B.C., this dolmen was doubling as a fort for the local kids.  It is built in typical Angevin style with one large chamber and a small porch at the front. The chamber is covered with a single enormous rock that is thought to weight about 100 metric tones (or more than 220,000 pounds). Even with a ramp, pushing that baby into place could not have been easy! 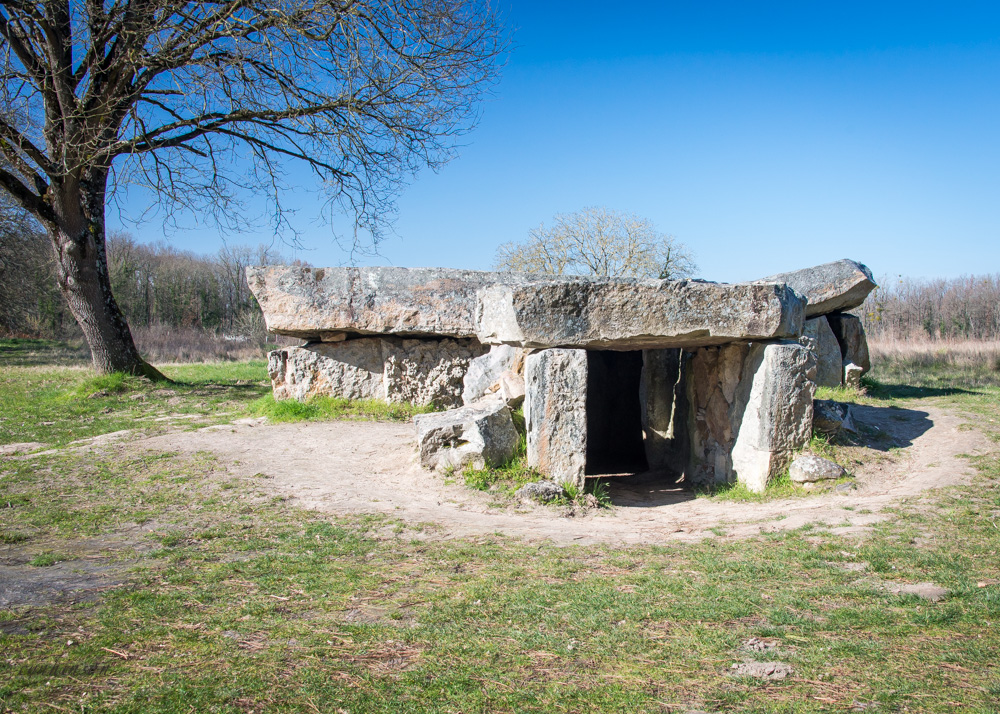 To our very pleasant surprise, the most impressive dolmen turned out to be located in the suburbs of Saumur, about 45 miles east of Angers. At 75 feet, the Bagneux dolmen is the longest in France; in terms of volume it’s the largest in Europe. It consists of a single chamber 60 feet long and a small entry porch. Despite the fact that the Dolmen de Bagneux has been classed as a Monument Historique since 1853, it's located in the side yard of a modest bar and restaurant.  And that's exactly what I love best about France. It's possible to eat lunch sitting right next to a structure that's 5,000 years old. 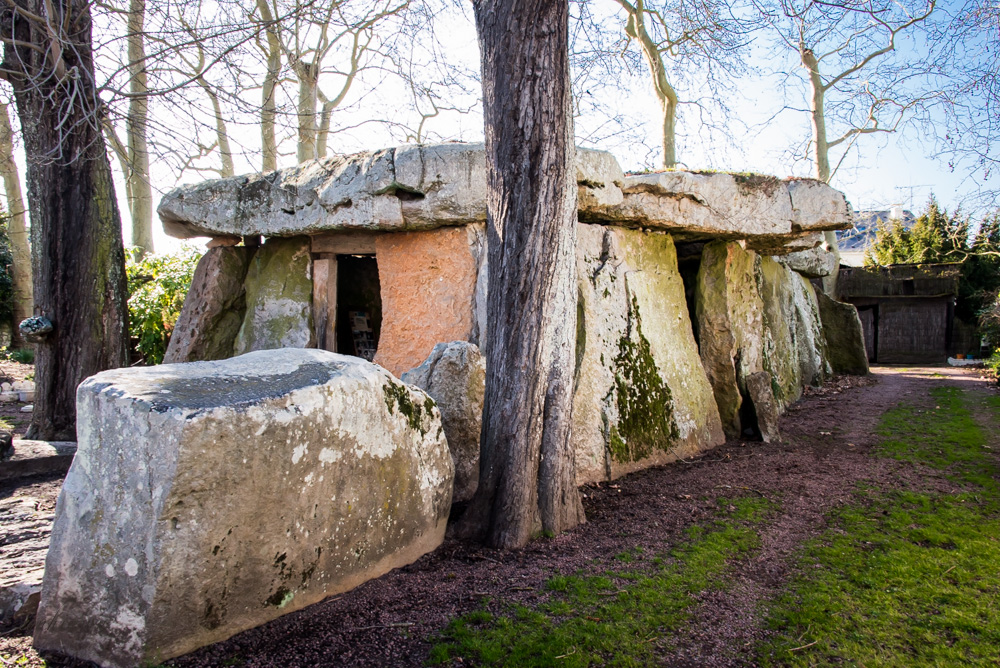 If you're planning on dolmen hunting, it's best to buy a detailed Michelin map of the area you're visiting. That way, all of the locations will be clearly marked. But be warned...before you know it you'll find that your shoes are soaked,  your jeans are filthy and your rental car is caked in mud.

*Although Angers is a lovely city, we decided it wasn't interesting enough to entice us to leave Bordeaux.