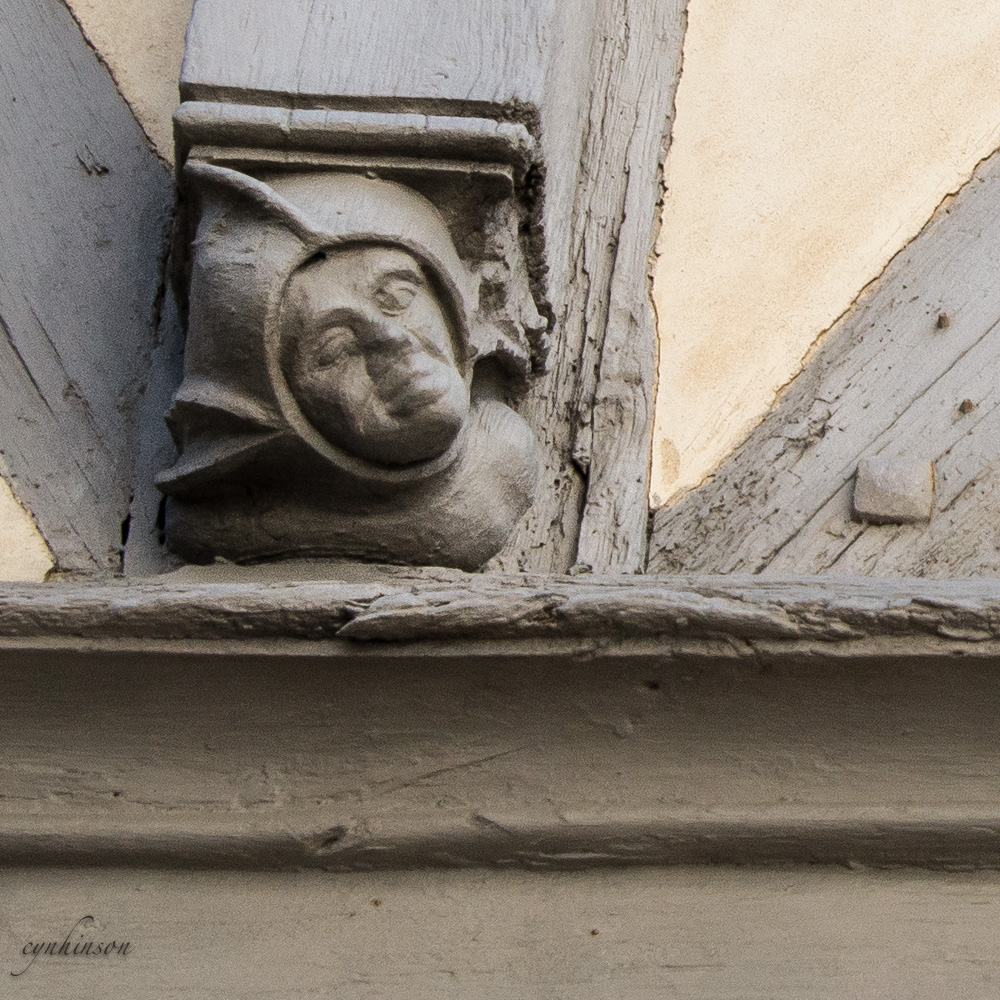 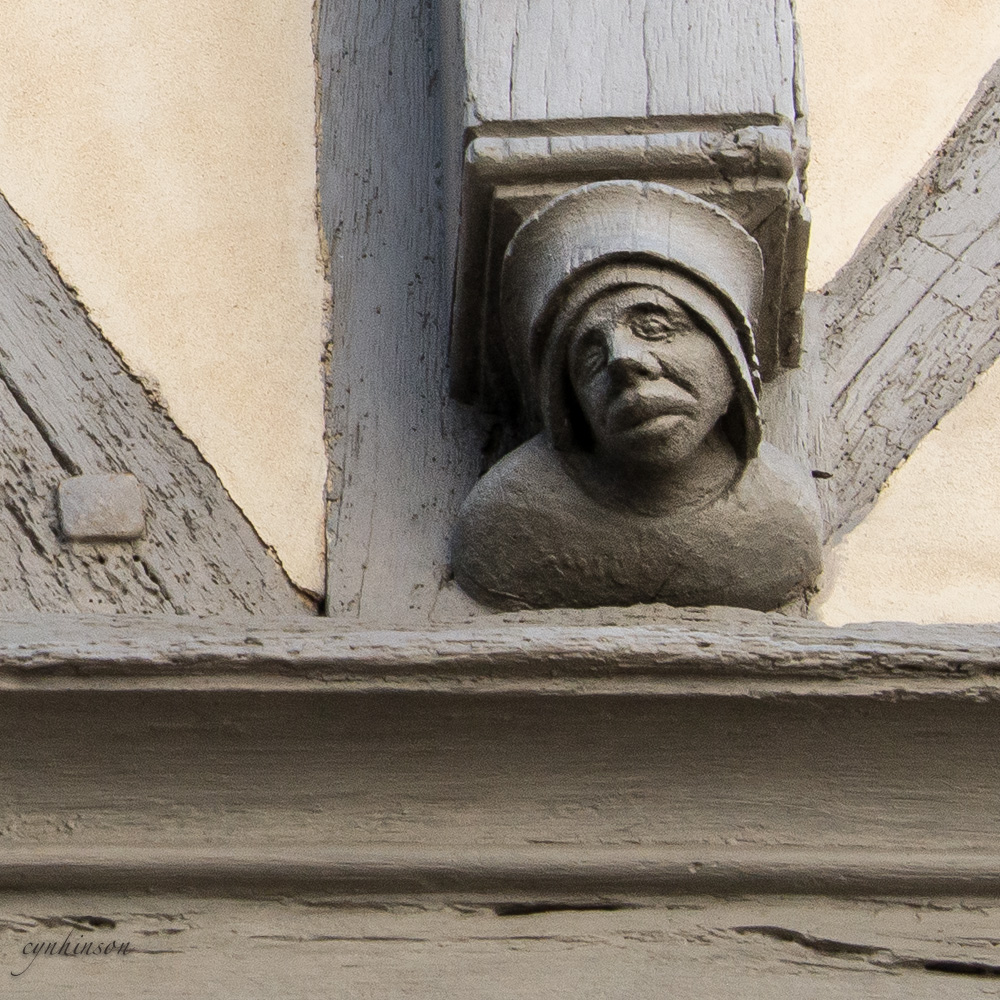 Anyone who reads this blog regularly (Hi, Mom!) knows that I have a weakness for colombage buildings. I’ve already written a couple of posts on the subject, one explaining the different types of colombage construction and another on the hidden messages that can be read in the structure. For my third post on the subject I’d like to introduce you to La Maison d’Adam, one of my favorite colombage buildings.

Bruce and I first saw Adam’s house in about 2002 on our first trip to Angers, and it made a lasting impression on both of us. I remembered it because, despite the age of the house,  it retains dozens of beautiful carvings; Bruce remembered it because one of the carvings is quite risqué.
The house was built by an apothecary named Jean Lefevre and dendochronology (the process of dating the wooden timbers in a building) shows that it was constructed in about 1491.  An imposing six stories high, La Maison d’Adam occupies a corner lot and therefore has two principle facades. A textbook example of colombage architecture, each level is decorated with sculptures large and small, on subjects both sacred and profane. 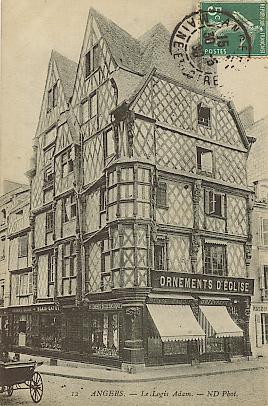 Decorating the corner at the ground floor level is a beautifully carved apple tree – the Tree of Life from which Eve plucked the apple. Originally, life-sized sculptures of Adam and Eve with the snake stood on either side of the tree, and gave the house its name. During the Revolution, when anti-Catholic sentiment grew to a frenzy, those figures were destroyed. 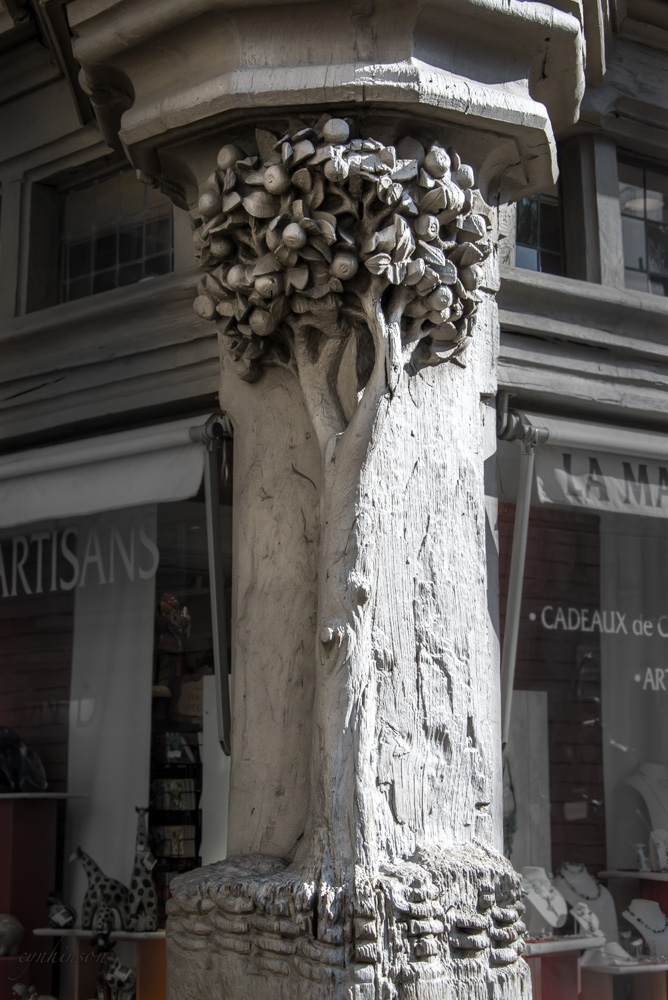 Of the remaining sculptures, those that convey the most religious symbolism are the two figures that represent the Annunciation; the first is the angel Gabriel imparting his news and the second shows the Virgin looking slightly overwhelmed, which might be due to the demonic figure that hovers over her head. 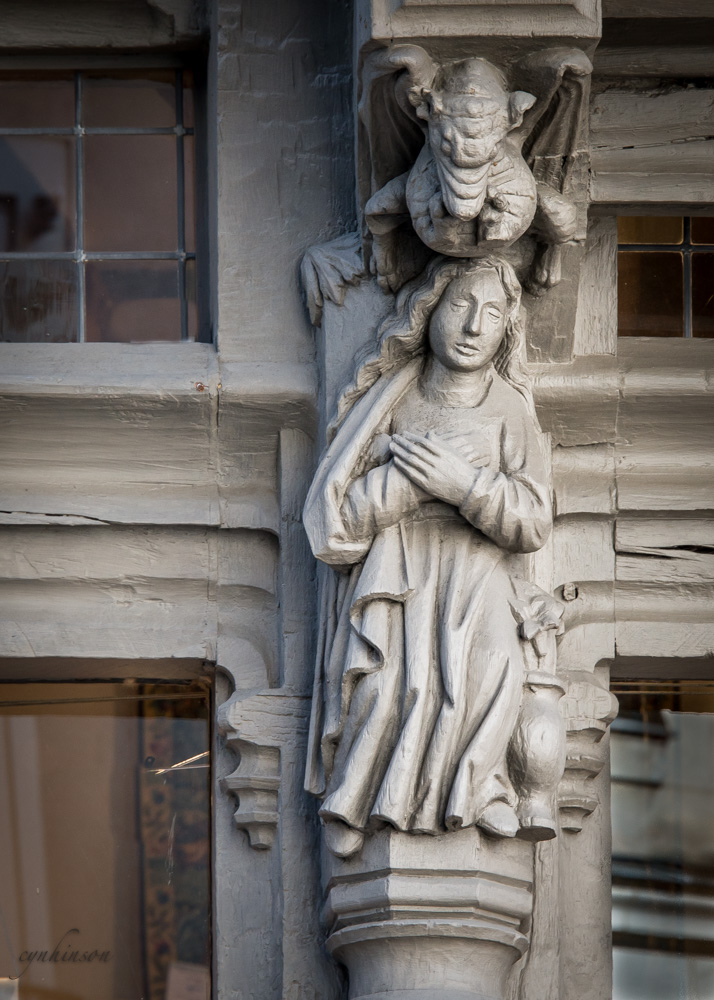 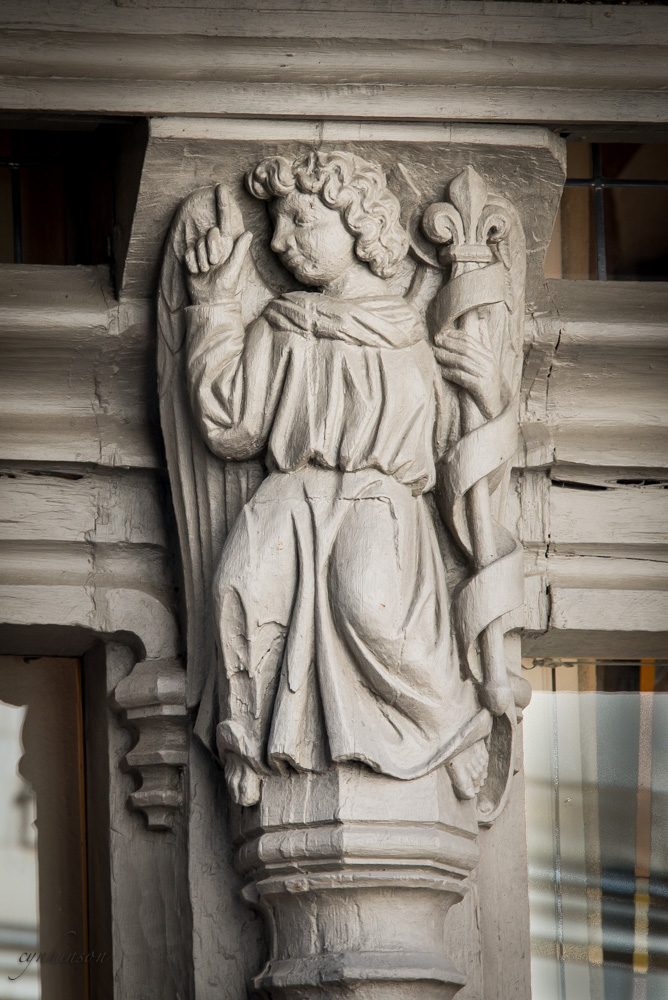 My personal favorite is the carving of Saint Michael (or perhaps Saint George?) who is poised to slide his sword into the belly of a grinning dragon. Another figure, who I can find no attribution for, pries open the mouth of a lion. (Could this be Daniel in the lion's den or is there symbolism here that simply escapes me?) 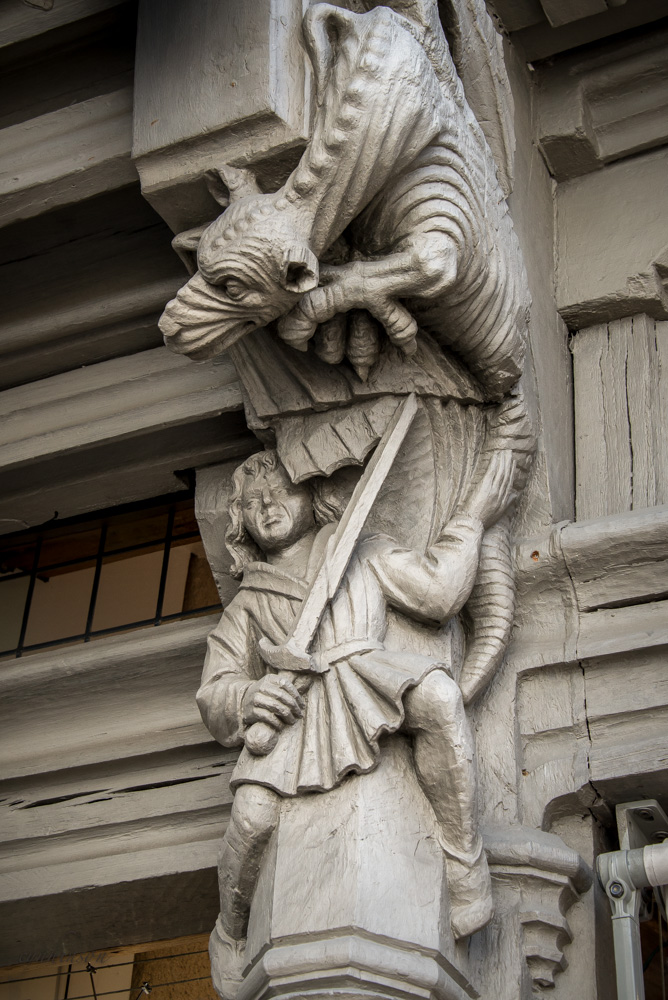 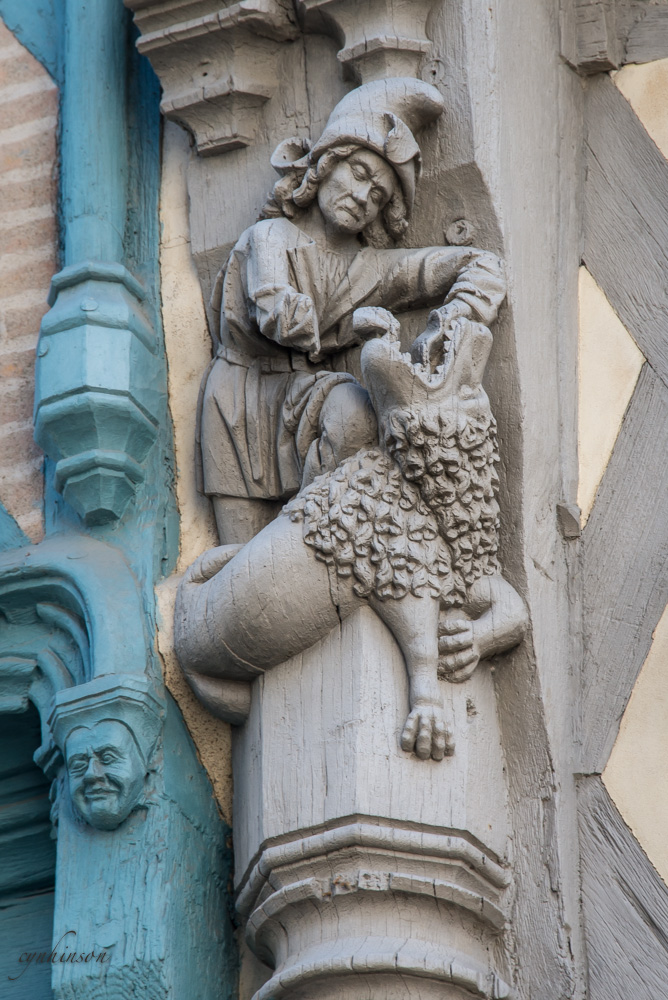 In the upper stories other symbolic sculptures include a phoenix rising from the ashes; a pelican feeding her young; and a mermaid holding a mirror, who seems to embody both temptation and vanity.

Representing more worldly subjects are the lovers and a pair of musicians, 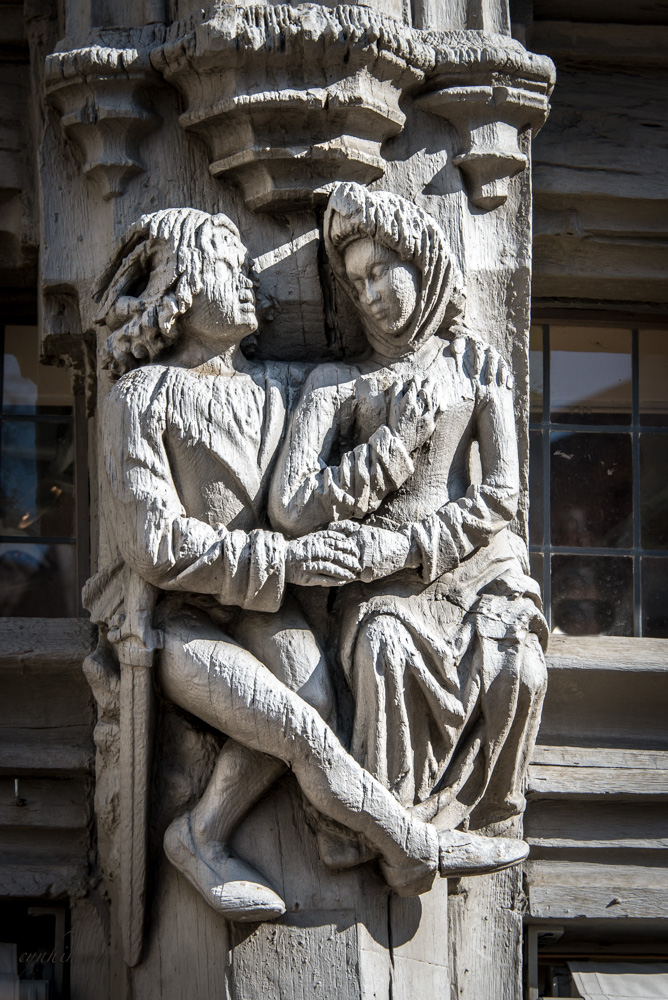 a man on crutches, a centaur, a soldier with sword and shield, a monkey, various workers with the tools of their trades and an ugly old woman.

The choice for each of these carvings is pretty clear. But also in evidence is the figure known as le Pere Tricouillard*, a man with his back turned to the street, his smock raised to show his bottom and private parts to every passerby. Judging from the disdainful smirk on the man's face and his hand placement, the little figure is  obviously saying: "Kiss my ass."  The reason for his inclusion is unknown, but there are several theories. First, it is possible that a Monsieur Tricouillard was an owner of the house and had the figure sculpted as a representation of his name. (Somewhat implausible, I'd say.) It's also possible that the owner of Adam's House was on bad terms with his neighbor across the way, and had the figure added as a constant reminder of his disdain (a much more likely scenario, to my mind). Or finally, this might be an image of Triboulet,** the famous dwarf who served as court-jester to King René of Anjou, and who lived in Angers during the fifteenth century.

Regardless of the explanation, you can see why it made such a lasting impression on Bruce.... 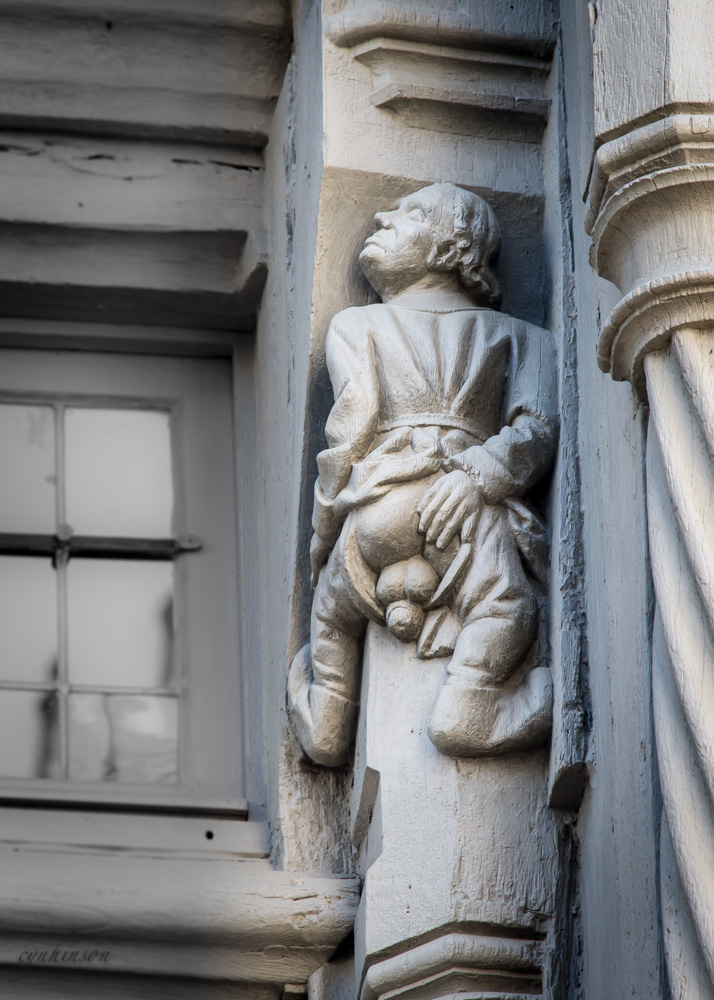 *The vulgar french word for testicles is couilles and a stupid or annoying person is a couillon. The word tricouillard therefore means a person with three testicles.
**The name Triboulet is comprised of tri (three) + boule (ball), which may explain why people think this may be an image of the jester.