Before moving to France I ran my own historic preservation business. To make ends meet I took lots of different jobs: historic research, building investigations, conditions’ assessments and lighting design. To be honest, anything that got me into an old building made me happy, so I enjoyed all of these tasks. But nothing was more fun than a paint analysis project. To be part of the process in which a building casts off its ghostly white shroud to regain its original appearance is really a treat.

For a paint analysis project I took small samples from historic buildings and studied them microscopically to determine how they had been painted originally. I noted the sequence of paint layers and matched the significant colors to an industry-accepted standard. When the investigation was finished I would recommend an appropriate palette for repainting, with the goal of returning this: 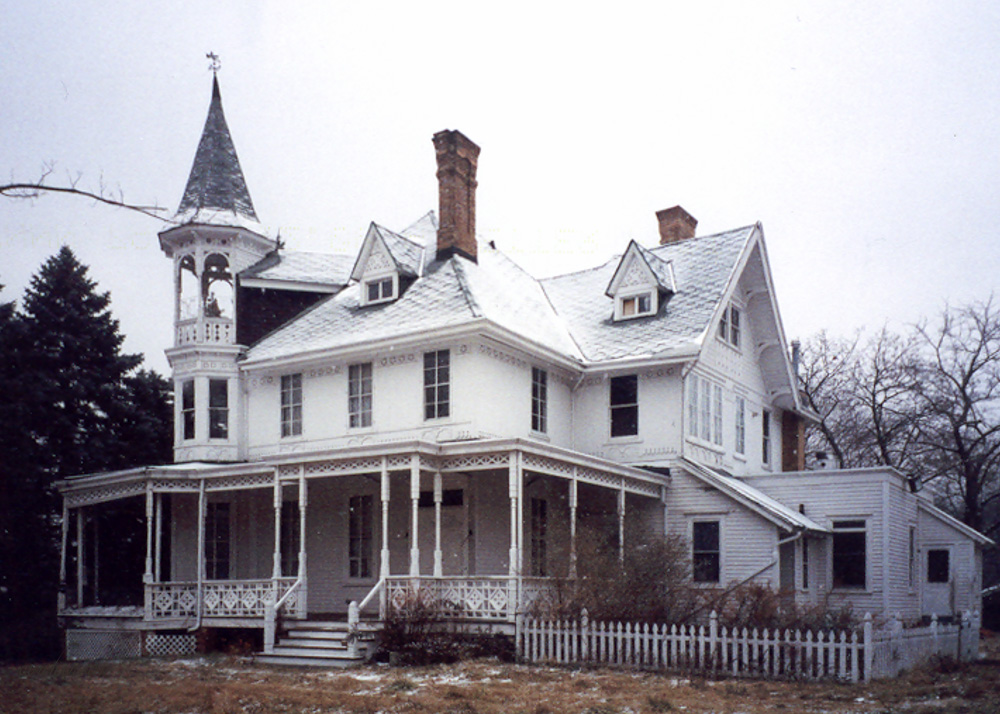 It's obvious from the above example that late-nineteenth century America was a riot of color. With the growth of manufacturing after the Civil War, it became much easier and less expensive to paint. And paint they did! Elaborate color theories were developed, and buildings were decorated in schemes that sometimes combined as many as seven different colors. But times change and taste changes with it. By the early 20th century the US was swept up in a new architectural movement - Colonial Revivalism - and the landscape was once again blanketed in white.

Europe has gone through similar periods of embracing color and then turning against it. But because the buildings here are so much older, the pattern has been repeated more than once. This is particularly true in churches, where, despite revolutions and rising damp, it’s still possible to find painted decoration that dates to the 11th and 12th centuries. Here too the use of color ultimatley fell out of fashion, and because the walls had often become black with candle soot, many church interiors were whitewashed, concealing, though not always destroying, the original decoration.

In the nineteenth century the French rediscovered a love of color. But the trend here was not simply due to changing style or the ready availability of manufactured paints; it was primarily an outgrowth of the country’s new historic preservation movement. For the first time French architects were studying and restoring their monuments, particularly the Gothic cathedrals. The interiors of the most important churches, such as Notre Dame de Paris, were fervently repainted, although there is some question as to the authenticity of the 19th century decorative schemes.

And now dust, sooty candles and diesel fumes have once again turned those colorful interiors black, and once again, many churches are being restored. As part of the restoration of the Cathedral of Saint André here in Bordeaux, the 1860 paint scheme is being painstakingly recreated. Not only are the allegorical paintings in the chapels being restored, but also the brightly-colored patterns that once decorated the walls, columns and vaults.** 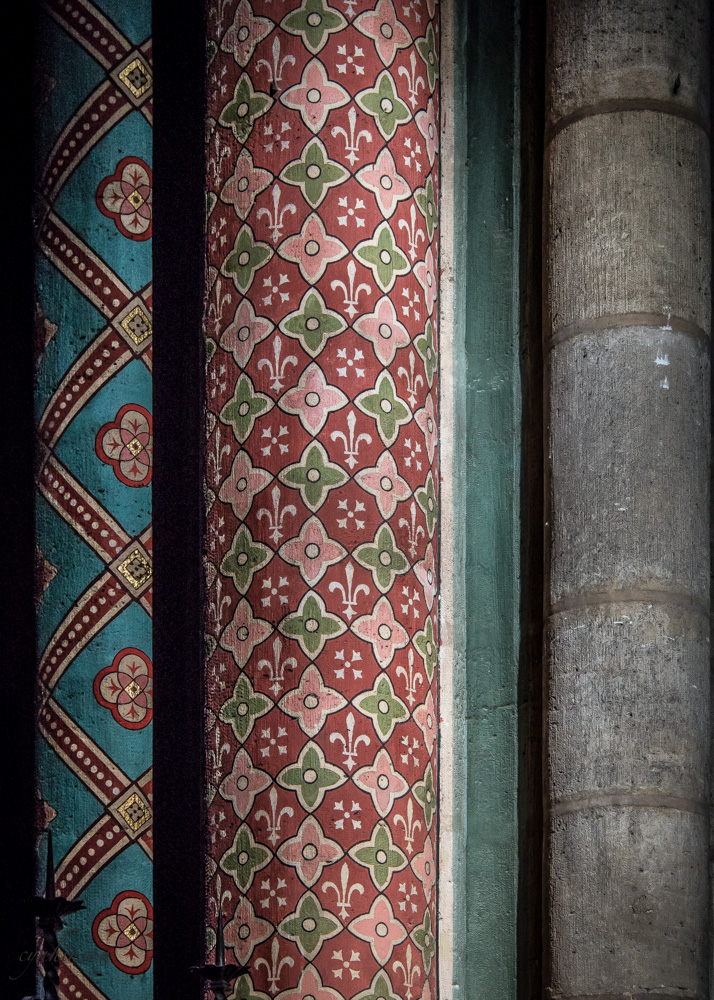 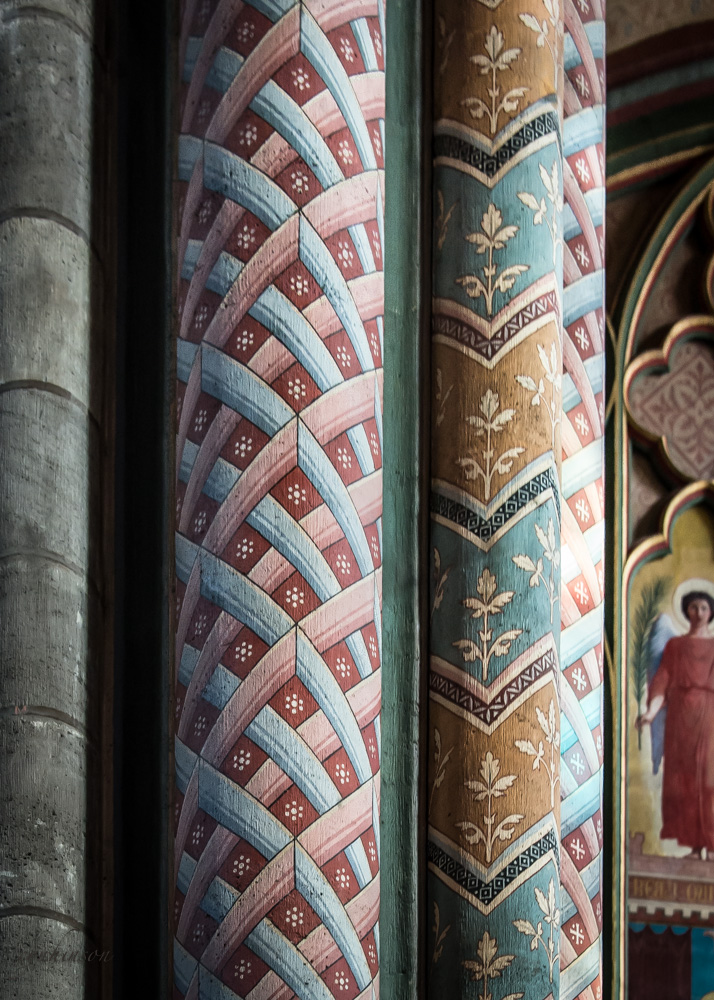 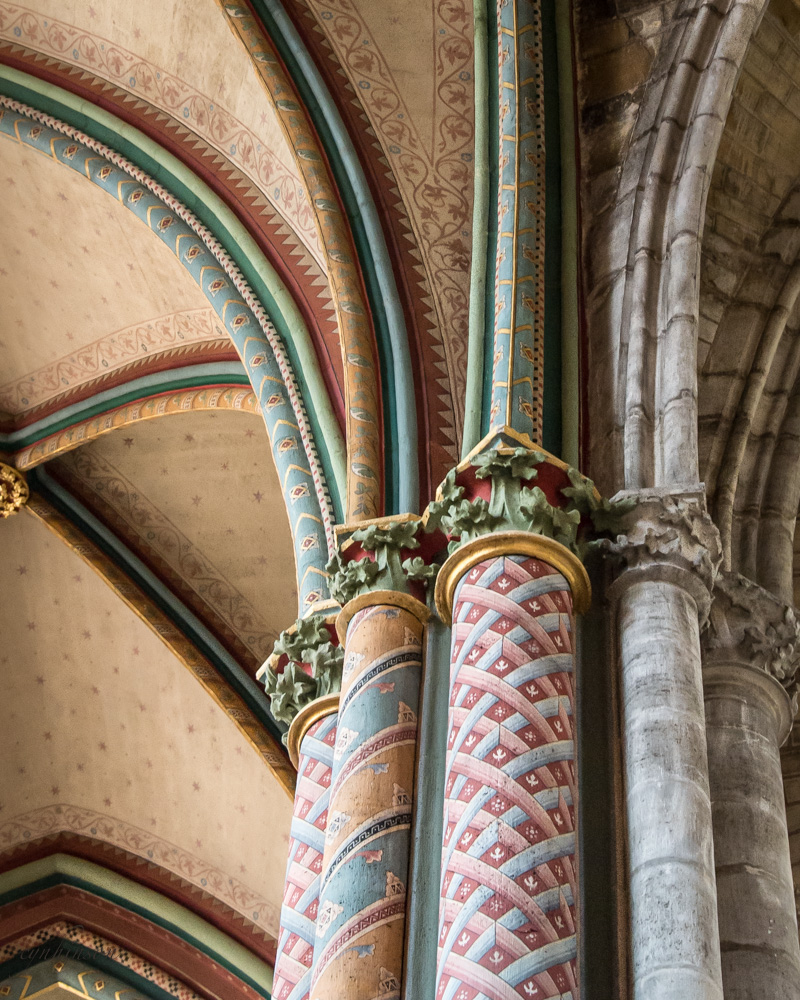 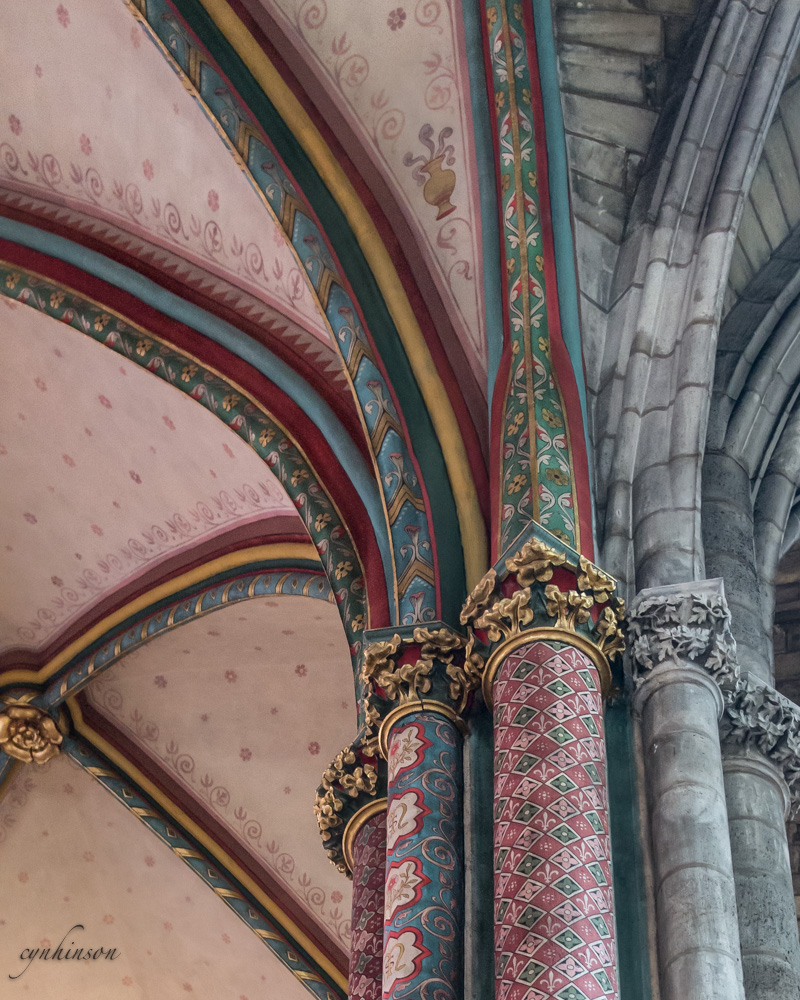 Saint André will be spectacular and you can look forward to several blog posts as the work progresses. But of all the current restoration projects, the most exciting work is undoubtedly being done at Chartres. There, for the past five years, craftsmen have been meticulously restoring the interior of the cathedral. What makes it so exciting is that this is the only cathedral to be returned to its original 13th century appearance! The gorgeous stained glass windows are being painstakingly cleaned with Q-tips and eight centuries of grime is being removed from the walls and ceilings with small scalpels.

When we visited last month the restoration of the choir had been completed and most of the ambulatory ceiling had been cleaned and restored. What was once a dark and dismal space is now breathtakingly luminous.

It will be at least another year or two before the interior is completely restored. But if you're in France, do plan to visit what is considered to be the most complete of all the Gothic cathedrals. Chartres is only a short train ride from Paris and well worth the trip!

For a link to a detailed article (in English) on the restoration of Chartres, including a video (in French) click here.

For a map that shows the locations of the painted churches in these posts, click here.


**It appears that Saint André may have been on the cutting edge of 19th century decorative practice. When the chapel walls were cleaned during the first phase of the restoration work, it was discovered that thin sheets of silver metal had been used in selected locations to provide additional brilliance. This turned out to be aluminum leaf, which at the time was almost prohibitively expensive. It’s use at St. André is one of the earliest, if not the earliest, uses of the material in a decorative capacity.

As mining and smelting practices improved, the price of aluminum fell. However, in 1884, when it was chosen to crown the tip of the Washington Monument, aluminum still cost about $1 an ounce, roughly equivalent to a laborer's wages for one day.
Posted by Unknown at 4:38 PM