I’ve become so accustomed to the dingy grey interiors of most European churches that I'm always surprised by the amount of color that was actually used in the Middle Ages. I’m not talking about the frescoes that decorate grand churches and small chapels; those fall under the heading of “ART,” a subject I don’t feel qualified to discuss. Instead, I’m talking about painted architecture: walls, columns, moldings, ceilings, vaults and statues. Any architectural element was a candidate for color.

Painting the (stone) walls and ceiling vaults to look like stone seems to have been the most common form of decoration. To create this effect the surface was first covered with a thin layer of lime wash in a neutral color, usually white or cream. Then a pattern of ashlar blocks was added, with the mortar joints drawn in red or gray, or even white, as at Chartres. 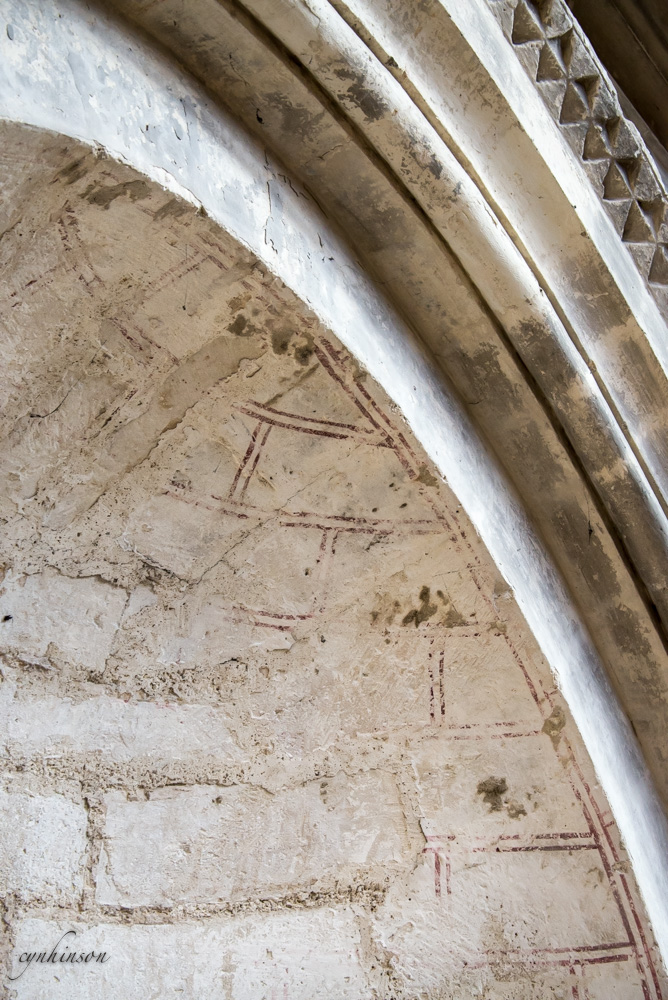 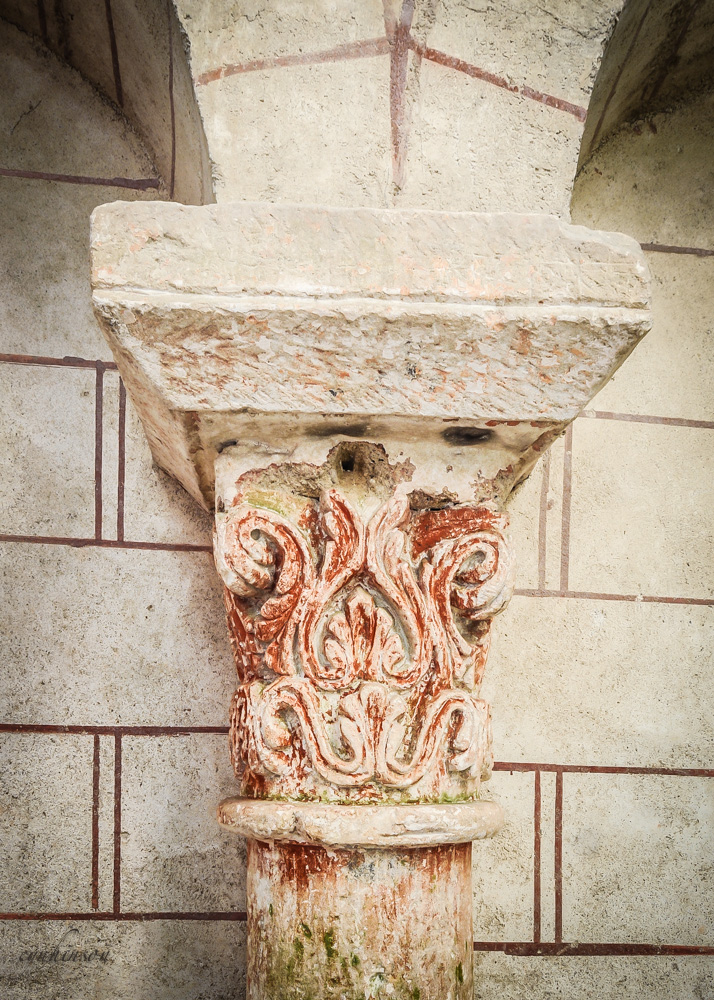 I don’t know why it was necessary to paint stone blocks on walls that were actually built of stone blocks. I can only conjecture that this faux ashlar treatment resulted in a finish that was more perfect than the actual masonry, and therefore, was better suited for use in these sacred places.

My favorite example of a painted interior has to be the abbey church at Saint Savin-sur-Gartempe, located about 30 miles east of Poiters. Here, in the 12th century, the barrel vaulted ceiling was richly painted with biblical scenes that have earned the church the nickname of France’s Sistine Chapel. In addition to the frescoed ceiling, the walls and vaults at Saint Savin are entirely painted to look like cut stone and highlighted with colorful bands of decoration. 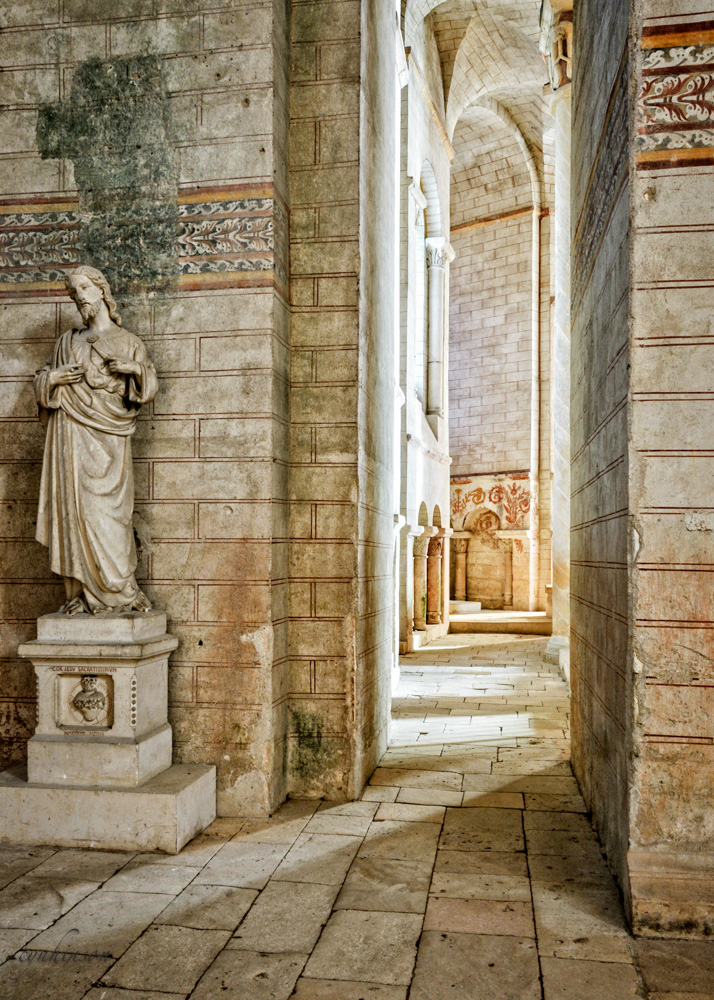 But what makes Saint Savin my favorite painted interior are the enormous columns, each of which is decorated with a unique and extremely fanciful interpretation of marble. 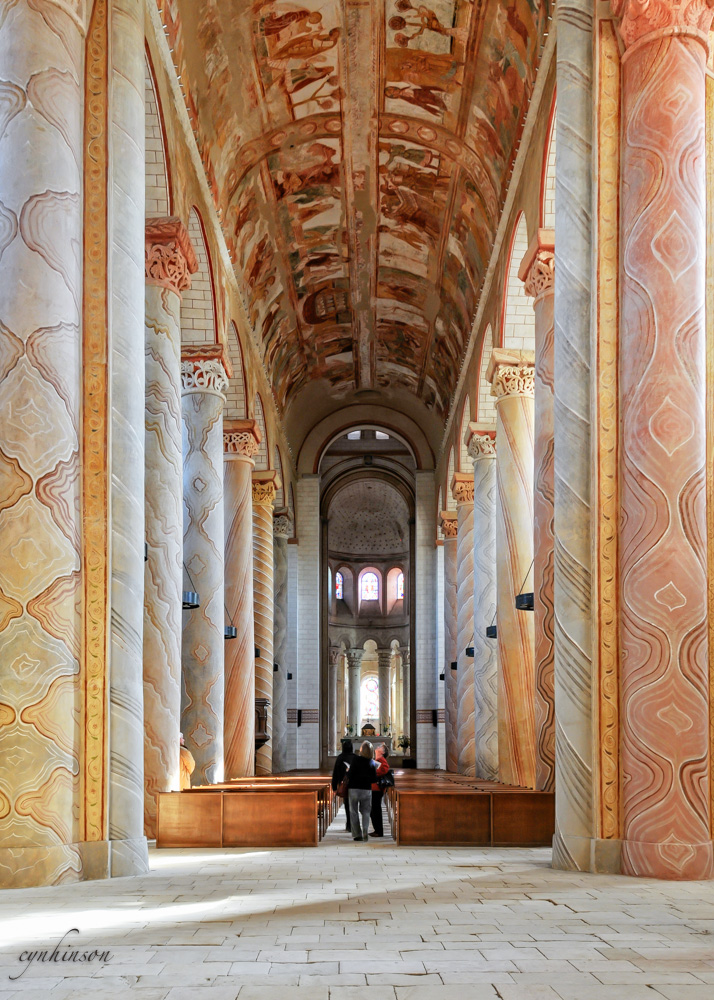 Given the age of these buildings and the number of times some have been restored, it’s difficult to determine exactly when a particular paint scheme was created.  But with its faded colors and appealing naïveté, I thought that surely the designs at Saint Savin must be quite old, perhaps even original. And sure enough - according to historian Mary Caruthers, author of The Experience of Beauty in the Middle Ages, this painted interior does indeed date to the twelfth century. She also believes that the designs were based on the marble columns found in significant Italian churches, such as San Apollinaire in Ravenna, or Saint Paul Outside the Walls in Rome. 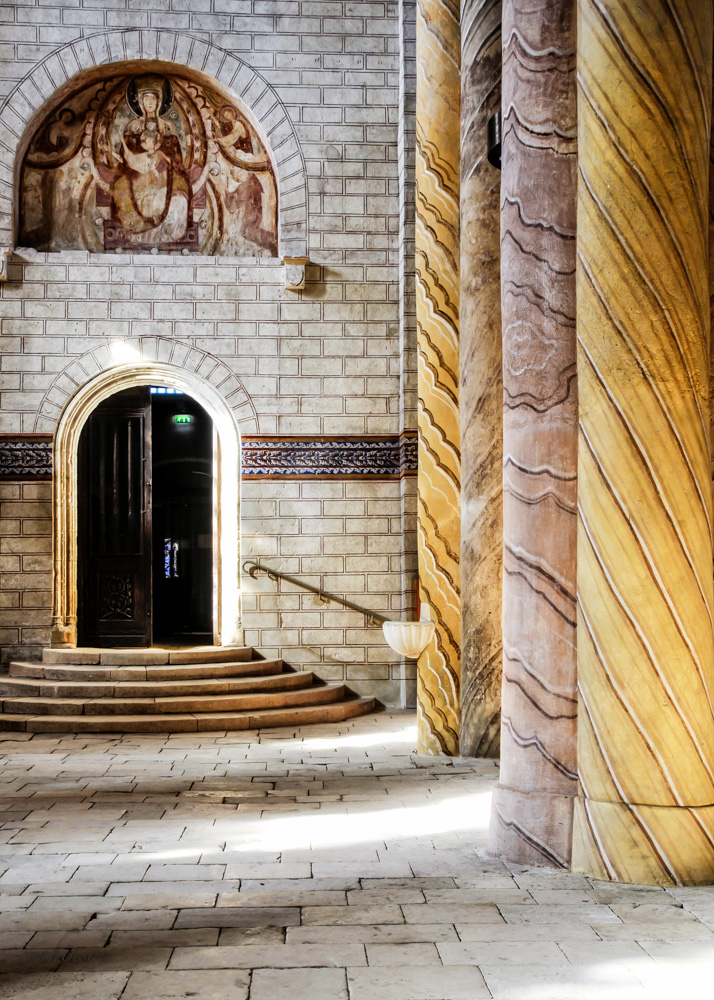 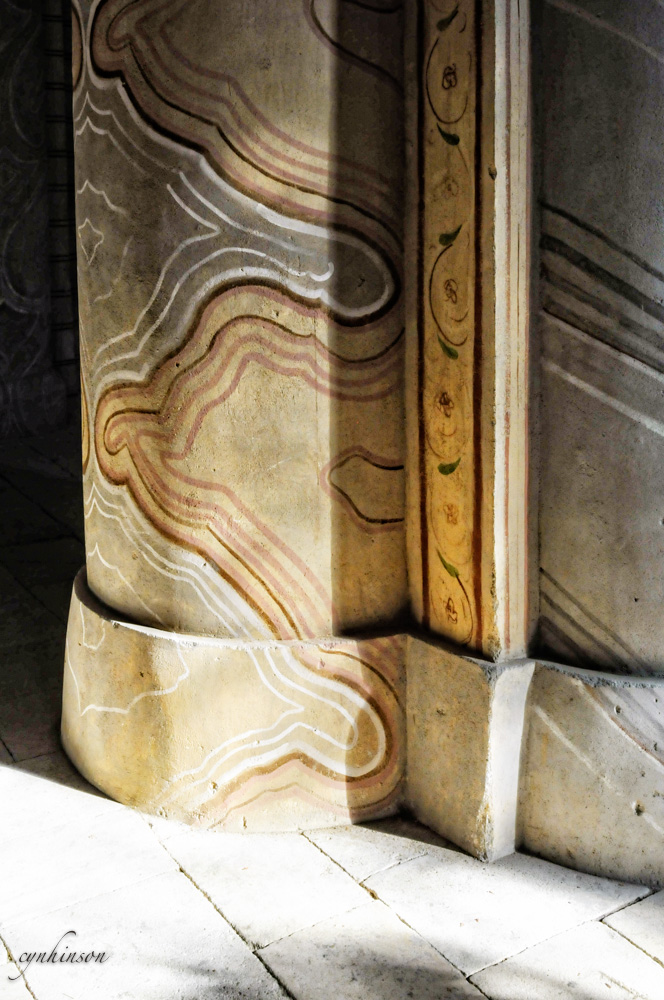 However, color wasn't reserved for the interiors of these churches; it was also used on the exterior. Below is the tympanum at the abbey church of Sainte Foy in Conques, where remnants of the original finishes are clearly visible. The aura that surrounds Jesus in his mandorla is due to the remnants of blue paint.

At Notre Dame Cathedral in Amiens a nightly son-et-lumiere production recreates the original painted decoration, with all of the polychromed ornament picked out not in pigment, but in colored light.  I haven't seen the show at Amiens yet, but I know that when I do, I will be just as impressed with the appearance of that painted cathedral as were those awe-struck pilgrims in the Middle Ages. 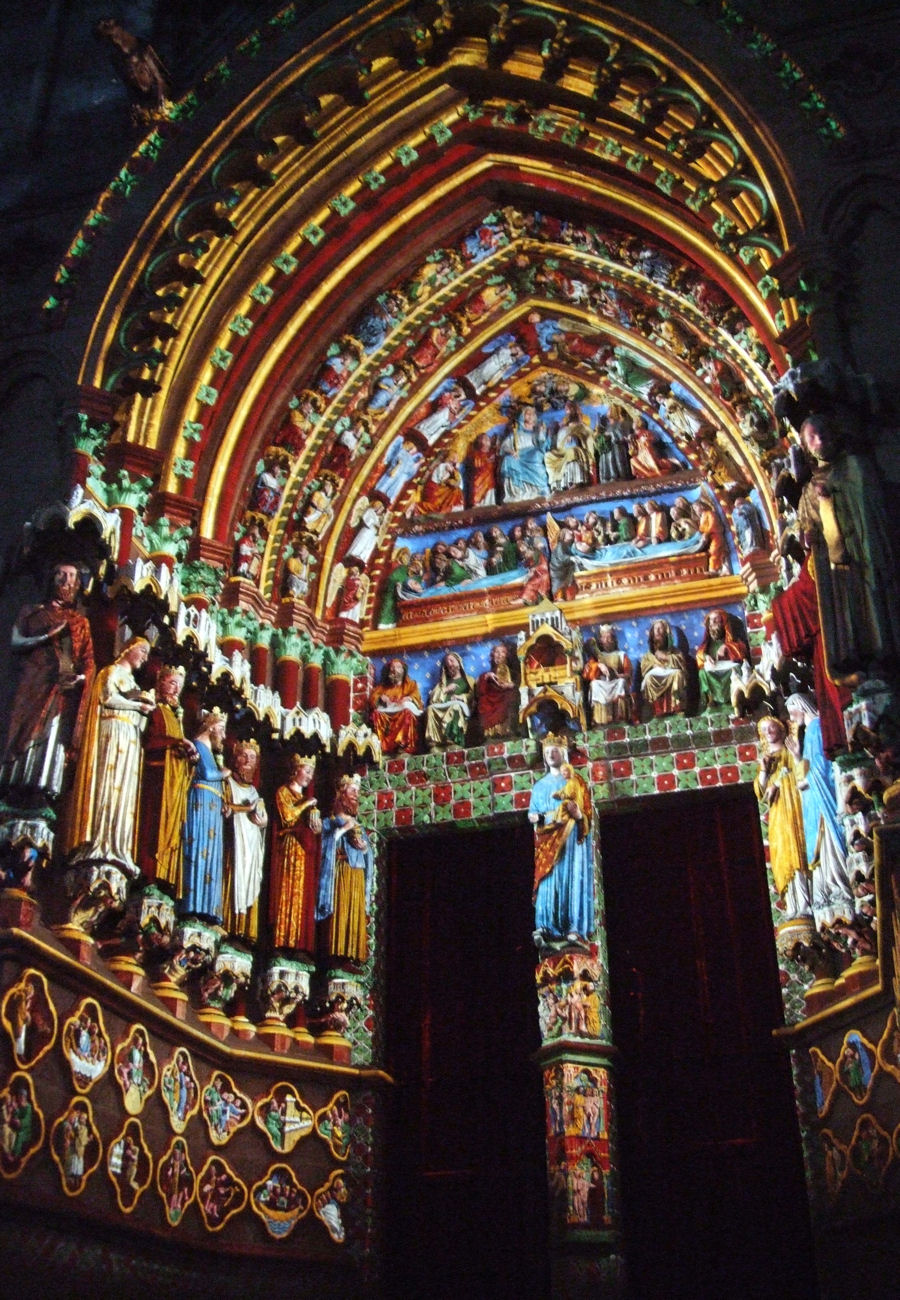 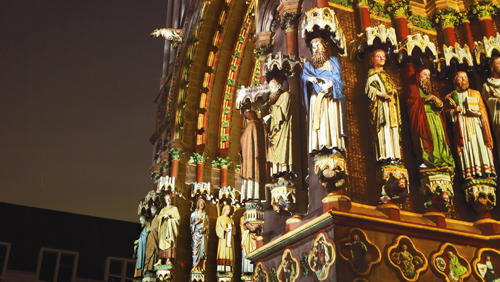 That wraps up the subject of painted cathedrals. If you'd like to paint your own gothic cathedral, click here for a link to a fun game, courtesy of the BBC and Wells Cathedral.

Each of the locations described can be found on this map.  And, as always, if you've enjoyed this post, please tell a friend. Thanks.