Blinded by the Light


Several weeks ago I wrote a post on Gothic architecture entitled “Let there be (more) light.” At the time I had intended to follow that with more on the same subject, but those last sunny days of summer threw me off track. Now that autumn is finally here, I think it's time to go back to that subject and talk more about the evolution and development of  'the French architectural style'.


Gothic architecture has been called a "drive for height and light.” This quest began in the late 12th century at the Benedictine church of Saint Denis, a few miles north of Paris. Why was the Gothic style born here, at an abbey church, rather than at one of the great French cathedrals?  Simply because St. Denis was much more than an abbey church. The church was dedicated to Denis, the patron saint of France, who, after being beheaded by the Romans, carried his head for two miles before coming to rest on the site of the present building. The first church was built there in the 7th century by King Dagobert and two centuries later St. Denis became the necropolis for French royalty, with all but three French kings being buried there. The church was also the ceremonial home to the oriflamme – the red and gold battle standard of the French crown that was last flown at the Battle of Agincourt in 1415. But most importantly, during the 12th century the abbey was run by the very capable Abbot Suger (pronounced soo-jay). A political advisor to King Louis VII and an outstanding administrator, Suger had entered the Benedictine order as a young boy. St. Denis was his spiritual home and once he became abbot Suger determined to increase the abbey's wealth and status. This presented something of a challenge because the building, now nearly four hundred years old, had fallen into serious disrepair.

Abbot Suger’s reworking of the church began in 1134. There, at the west end, he created an imposing new porch with tall flanking towers and an unusual crenellated cornice. The front elevation also incorporated a large circular window, the first time that this motif had been used on the façade of a church. During the following centuries the “rose window” became a hallmark of the Gothic style.


Although Saint Denis’ west façade was innovative, it only hinted at what was to come. Constructed at the eastern end of the church, the chevet was Suger’s true masterpiece, and it became the most widely copied space in Christendom. Here, Suger’s architect, whose name remains unknown, created a double ambulatory, or walkway, around the back of the altar that opened onto nine radiating chapels. Between each chapel the exterior wall was turned 90 degrees to the chapel interior and these became a series of structural buttresses. Once the masonry walls were relieved of their structural purpose, the space between the buttresses could be filled with glass. And because the shallow radiating chapels opened into the ambulatory, the light from the stained glass windows spilled into the choir beyond.


The new chevet was unlike anything ever seen.  In contrast to the dark interiors of Romanesque churches, here the light filtered through the colored glass illuminating the spaces beyond. In fact, to heighten the effect, Suger went so far as to remove the altar screen that blocked much of the light. 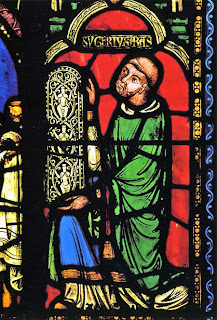 But why exactly was the good abbot so preoccupied with light?  Christianity, like many religions, used images of light as a representation of the Divine. But at Saint Denis that symbolism was doubly important. (This gets a little bit convoluted, so hang in there.) The Latin name for Dennis is Dionysius, the name that Suger would have used for his church. In the 5th century a Syrian theologian, also named Dionysius, wrote a series of religious texts in which he equated God with Light. A copy of these texts was given by Pope Paul I to Pepin the Short of France in 785 and by the ninth century the works had been translated into Latin and the manuscripts were housed in all of the influential French monasteries. Over the centuries the identities of these two early Christians became intertwined and confused, with the result that the writings of the Syrian Dionysius were often attributed to the French Denis. There is no doubt that Suger was well acquainted with these works and that the message of Dionysius/Denis was doubly important to him because of the confluence of the names. 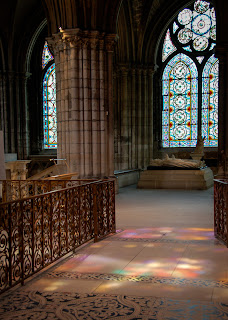 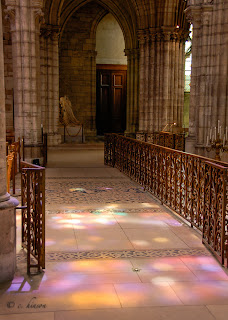 In The Divine Names Dionysius wrote that spiritual light emanates from a heavenly being and is directed downward where it is received, and like a thousand small lamps it is in turn reflected back into the heavens. In The Celestial Hierarchy he once again described the heavenly light as radiating from above, "spreading itself over us" and “lifting us up.”  But in this text Dionysius expanded on his original theory to include the idea that material objects were a necessary part of this process. According to his philosophy, the "lifting up" could not occur without the use of "representative symbols."

Suger also subscribed to this theory and he was often quoted as saying that “The dull mind rises to truth through that which is material.”  In order that the dull minds of the 13th century wouldn't lack for inspiration, the abbot installed as much gold and as many jewels as he could acquire in the newly-designed choir. The tomb of the patron saint was rebuilt with fifteen marks of gold, and the rear and sides were regilded with forty ounces of gold. As many as seven artisans were employed to restore the golden crucifix, using eighty marks of gold and countless precious gems and pearls acquired from neighboring abbeys. And because Suger believed that the only the most costly items should be used to celebrate the Eucharist, he had a number of gold liturgical vessels fabricated, including  “a big golden chalice of 140 ounces of gold adorned with precious gems.” 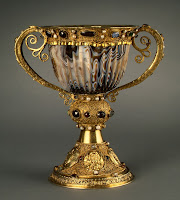 And there you have it -  the reasons behind the birth of what may be the greatest architectural style ever.  In my next post I'll take a look at how Suger's chevet influenced architectural developments, not only in France, but in the rest of Europe as well.