Last week I wrote about the abbey church of Saint Denis and the birth of Gothic architecture. There, Abbot Suger took the writings of a 5th century Syrian theologian and transformed them into an architecture of light. In doing so, Suger initiated a chain of events that resulted in the creation of hundreds of astounding buildings that continue to inspire and “lift us up”.

Suger’s new chevet, consecrated in 1144, spurred great competition between the abbots and bishops of the surrounding churches and the race for “height and light” was on. In 1160 the choir of Notre Dame de Paris was reconstructed; that in turn provided the impetus for the rebuilding of Chartres. Through a continual process of trial and error, which resulted in spectacular structural failures on more than one occasion, the Gothic cathedrals leapt ever higher: Chartres at 120 feet; Amiens at 139 feet; and Beauvais, the tallest, topped out at 157 feet.

The result of this increased height was that significantly larger portions of the walls could be glazed, allowing more of the heavenly light to suffuse the interiors. At Chartres three rose windows were installed, one in each of the north, south and west portals (they're shown at the top of the post). On the interior the double lancet and rose glazing of the clerestory level became the standard for all of the cathedrals that followed. A further refinement occurred at Amiens, where the development of the glazed triforium (the gallery space above the side aisle arches) allowed even more light to penetrate the cathedral interior.

But the perfect example of Gothic architecture wasn't created at one of France’s magnificent cathedrals. Instead the philosophy of Dionysius found its greatest expression at the Sainte-Chapelle, on the Ile-de-la-Cité in the heart of Paris. The chapel was constructed in the mid-13th century by the French King Louis IX to house the Passion relics, the holiest articles in Christendom. These sacred articles, which Louis had purchased at enormous expense from Baldwin II of Constantinople, included, among other items, the jaw bone of John the Baptist, a vial of Mary’s milk, a piece of the true cross, one of the crucifixion nails, the holy lance and sponge, and most significantly, the crown of thorns.

An extremely pious man, King Louis was beatified in 1297 from which time he has been known as Saint Louis. It is indicative of his personality that Louis died while on the second Crusade of his monarchy. Among the many stories of his pious acts is one that describes the king walking barefoot in the snow for many miles to reach the caravan that was transporting the relics to Paris. But Louis was not only a pious man, he was also an astute politician. His purchase of the relics sent a clear message to the rest of the world that the French king was now the wealthiest and most powerful monarch in Christendom.

The Sainte-Chapelle was designed with two chapels, one located above the other. The lower chapel (shown in the upper two images below) is a relatively small space with a low ceiling, and was used by lay people. The upper chapel, which connected directly to the palace, was reserved exclusively for Louis and members of the royal family. In plan the upper chapel consists of four bays plus an apse that housed the relics. Around the perimeter are stained glass windows of indescribable brilliance. 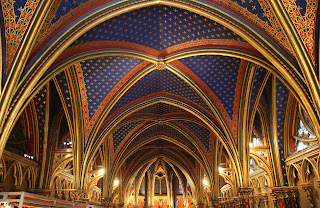 Because the Sainte-Chapelle was specifically designed to house the Passion relics, Louis’ goal in creating the building was to create an architectural reliquary similar to the gilded and jeweled boxes that held precious religious objects.  In imitation of a reliquary the interior of the chapel was brightly painted and richly decorated. But it was the glowing glass walls that contributed most to the reliquary-like appearance of the space.


There are a number of reasons why the Sainte-Chapelle is particularly luminous. First, there is its size. Although the chapel appears deceptively small, the glazed windows are each over fifty feet tall.  Then there is the absence of side aisles that in larger cathedrals block a large percentage of the light. And finally, as Abbot Suger had discovered at Saint Denis, the absence of a choir screen allowed light to permeate the interior. Because the interior of the Sainte-Chapelle is entirely devoid of furnishings, the gem-like quality of the glass is particularly apparent. 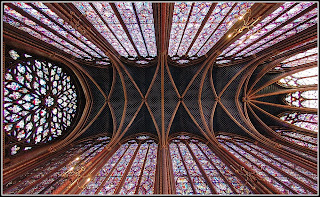 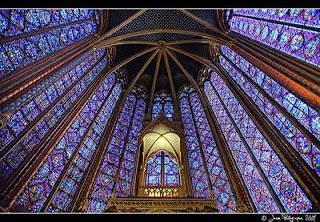 Over the centuries the Sainte-Chapelle endured a number of alterations that diminished her glory. A monumental staircase was constructed (since removed) to provide public access to the upper chapel. Then, as the city crowded around her, the chapel became lost in a jumble of new judicial buildings.  During the Revolution, the Saint-Chapelle, a strongly detested symbol of both royalty and religion, was horribly vandalized. The steeple was brutally pulled down, directly into the upper chapel. Interior furnishings were destroyed, relics were scattered, and because the upper chapel was used to house archival documents the lowerst sections of the precious glass were removed.


In the early 19th century Victor Hugo and other noted Frenchmen began to agitate for the restoration of the chapel. This gave rise to the Monuments Historiques, the preservation agency that has saved so many of the country’s historic sites from neglect and demolition. The stained glass, which was restored along with the rest of the interior in the 19th century, has since been re-restored and over two-thirds of the original glass is in place.


Entering the Sainte-Chapelle today, over seven hundred years after its consecration, one experiences much the same feelings as Jean de Jandun, who wrote in 1323, “in going into [the chapel]  from below, one understandably believes oneself…to be entering one of the best chambers of Paradise.”  Truer words were never written.....