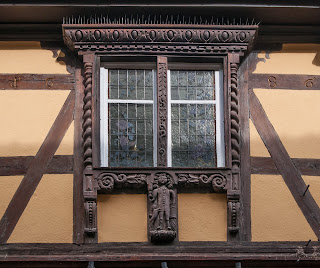 Earlier this year I wrote about the colombage buildings in northern France, particularly the beautiful houses in Rouen. (If you want to read that post please click on the word 'colombage' in the labels list at the right.) But we just returned from a trip to Alsace in eastern France, an area that is widely thought to have the largest number of preserved wood-framed structures from the 15th to 17th centuries.

I loved the houses in Normandy but the buildings in Strasbourg, Colmar and the surrounding villages are truly spectacular.  Perhaps because there are so many colombage buildings left, the villages all seem trapped in a time warp - albeit one that is very clean, with lots of places to buy touristy trinkets. 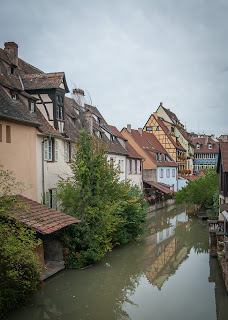 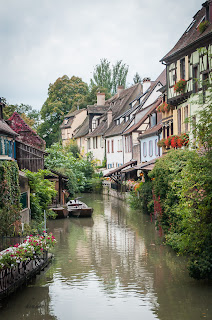 The colombage houses in Alsace are slightly different from those in other regions, particularly because the Alsatians really understood how to make the most of a piece of wood.  The major structural members, which are generally vertical or diagonal, are grouped into rhythmic arrangements. And the smaller timbers, such as those located beneath window openings, are crossed to form X's and curved into U's. 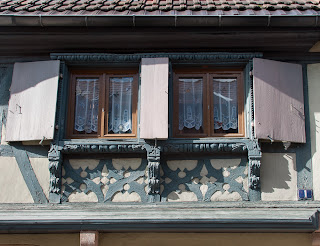 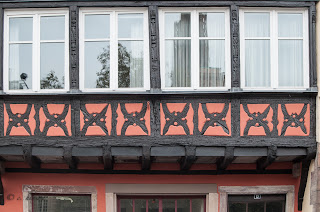 The Alsatians also decorated the individual members with beautifully executed carvings.  Angels and demons; plants and animals; even Indians and explorers like those below; just about anything was considered an appropriate subject. 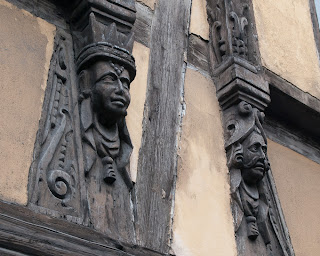 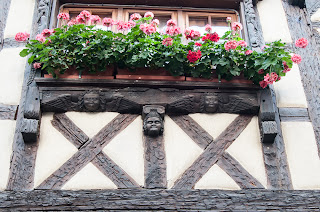 Frequently, large carvings decorate the building corners, such as these two from a house in Riquewihr.  The figure on the left appears to be a wild man dressed in a tunic of leaves.  The second figure, with neatly coifed hair and beard, is wearing what appears to be a leather apron that holds a small hammer, perhaps an indication of his status as a skilled tradesman. His shoes are so beautifully recreated that I wonder if the owner of the house was a cobbler. 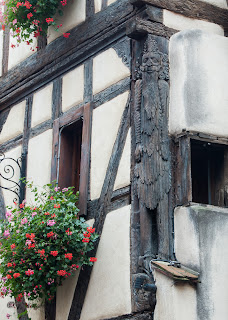 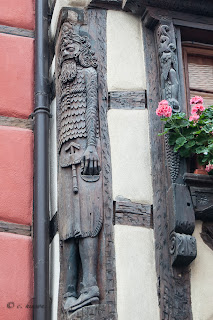 The carving below appears on the Maison Sum Kragen in Colmar, built in 1609.  It shows a bourgeois man - probably a cloth merchant - with a carefully trimmed beard, dressed in typical Renaissance style with a jaunty hat.  If you click to enlarge the image, you will also see that the window frames are carved and that the plaster between the framing members is beautifully painted. 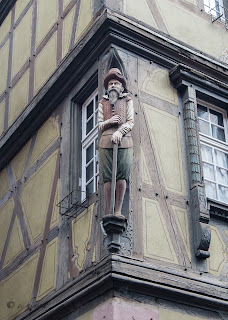 Still other buildings, such as this house in Kayserburg, combine beautifully arranged structural members with carved ornament and throw in a little color to spice everything up.  In this case, the paint is fresh, but the house was  built by blacksmith Michel Hertzer in 1592. Beneath the windows is a carved band that states, "I would rather fall into the thistles than deal with gossips." 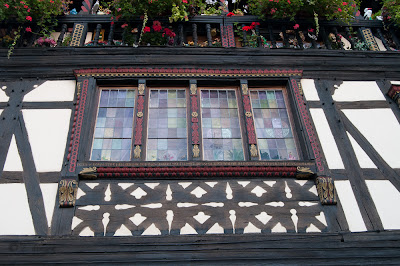 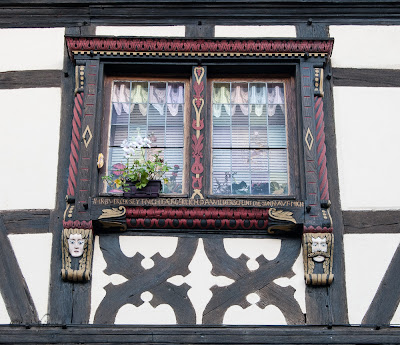 But perhaps the finest example of Alsatian woodwork is the Maison Kammersell in Strasbourg. Built in 1467, and largely remodeled in 1589, the building (now a hotel and restaurant) is a riot of ornament. Every wood member is decorated and the plaster is lavishly painted.

Each facade contains its own iconographic cycle. The corner posts are carved with representations of the theological virtues, including faith, hope and charity. Old and new testament priests highlight the windows on the west facade. The ten stages of the life of man are shown on the gable wall and at the first floor are five women representing the five senses. Other carvings include the signs of the zodiac and numerous musicians. I'm only sorry that it never stopped raining long enough for me to photograph these details myself!

Below is a 5-minute video of an interview with a young Alsatian who has spent ten years restoring a colombage barn and vigneron's house. He explains how he salvaged material from other old buildings, gives a tour of the buildings and shows some of the painted furniture typical of the region. If you're interested in vernacular architecture, it's worth a look. Even if you don't speak French you'll appreciate the before and after photos.

And please let me hear from you. Comments. Questions. Advice. It's all welcome.