Wild Horses...The Monument to the Girondins

It’s nearly 100 degrees in Bordeaux and it’s August, so most of France is on vacation. Restaurants are closed, the streets are empty and the only thing Bruce and I can do is sit around our un-airconditioned apartment and sweat.

Because it’s so hot I decided that it’s probably not the best time to be writing about heavy subjects like the evolution of Gothic architecture. So for the next few weeks I’m going to take a break from posts that demand a lot of concentration. Instead, I’m just going to show you some of Bordeaux’s gorgeous architecture. 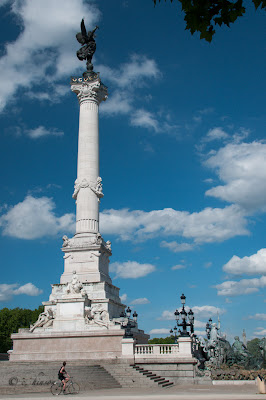 Although not strictly 'architecture', the Monument to the Girondins is one of the most visible landmarks in Bordeaux. The 140-foot column can be seen from just about anywhere in the center of town and the fountain at the base is one of the first things most visitors see since it's only a block from the Tourist Office.

Erected on the enormous Place des Quinconces in the late 19th century, the monument is dedicated to twenty-two Girondins, Bordeaux citizens who were guillotined in the French Revolution, during what’s known as the Reign of Terror. These deputies to the National Convention were in favor of abolishing the crown but tended to be more conservative than their opponents, which cost them their lives. American Thomas Paine, who was living in Paris at the time, adopted their philosophy, for which he was arrested and nearly guillotined.

The Monument is a riot of symbolic figures, although ironically, it doesn’t include any direct reference to the Girondins. Winged Liberty breaks her chains atop the central column, while further down is a crowing rooster, the universal symbol of France. (My French friends tell me that the rooster is the only bird who will sing while standing in it’s own shit.)

Clustered around the base are numerous marble figures including the City of Bordeaux depicted as a majestic woman. She is flanked by lovely water nymphs symbolizing the Dordogne and Garonne Rivers. These two female figures lean out around Bordeaux and appear to be coyly gossiping.

The enormous fountain basin is divided into two sections. To the west the Triumph of the Republic features furious bronze dragon-horses rearing and snorting over human figures representing Work (a blacksmith), Power and Wisdom (a lion) and Triumph over Ignorance and Vice (various cherubs).

The eastern basin shows The Triumph of Concord with Concord herself brandishing an olive branch amidst more snorting monster-horses. Human figures symbolizing Fraternity and Abundance frolic with cherubs depicting Industry and Trade and Arts and Science. 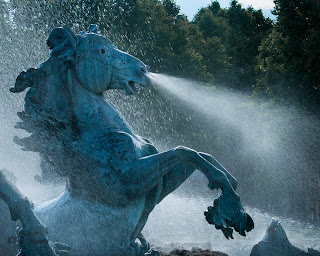 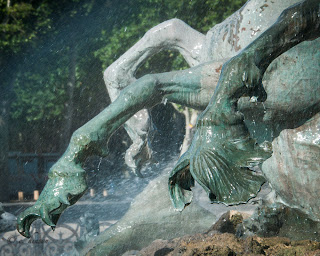 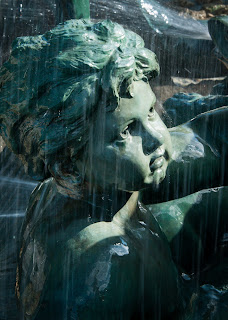 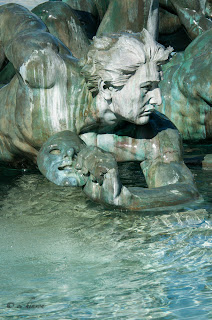 The whole confection is topped with gorgeous light fixtures, bronze shells and assorted carvings in what can only be described as the last gasp of Classical excess. Never again will cities be willing or able to build monuments on this scale. In fact, these figures were nearly destroyed during World War II when they were collected by the Germans to be melted down for armaments.  Fortunately, however, the bronzes were found at the end of the war, and the fountain was restored in 1983. The horses have been rearing in what looks to me like wild-eyed terror ever since. 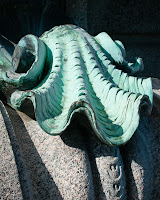