Have you noticed anything odd about this blog? Has it occurred to you that I live in Bordeaux, one of the most beautiful cities in France; that I blog about architecture; and that I’ve promised, several times in fact, to write about the architecture of Bordeaux. But, so far, I haven’t been true to my word. I always seem to be distracted by some other subject. Sure, one of my first posts was on the Palais Galien, Bordeaux’s only Roman ruin. And I did a little piece on the boot scrapers around town. And there was something on Corbu in the ‘burbs. But so far I’ve studiously avoided writing about the Classical architecture for which Bordeaux is justly famous.

Now why do you suppose that is? I’ve been thinking about it a lot over the past couple of weeks, as I continued to put off that long-promised post. And I finally realized that the answer is a complete no-brainer --- 18th century classical architecture may be beautiful, but it’s so rational and ordered that, to me, it’s just plain boring.

As an architectural term, “Classical” applies to any building whose design is based on the ancient buildings of Greece and Rome. At it's most basic, this means that the building will probably be rectangular and each face will be symmetrically arranged. The door will be in the center of the main façade, with the same number of windows flanking it on either side. Often there is a porch-like portico on one or more sides, usually supported by columns designed in the three most common Greek styles: Doric, Ionic or Corinthian. You’d recognize it anywhere - it’s the favored style for European palaces and American banks.

Without a doubt the most classical of Bordeaux’s buildings is the Grand Theatre. Constructed at roughly the same time as the American Revolution (1773-1780) this is considered the masterpiece of Parisian architect Victor Louis. Not only does the building perfectly fit the above description of the classical style, but, appropriately enough, it was also constructed on the site of the city’s Roman-era forum. Prominent statues of the nine muses and the goddess Juno, Venus and Minerva top the elegant Corinthian style portico, the front steps of which provide a gathering spot for locals and tourists alike.
It’s unquestionably beautiful, but personally I find the Grand Theatre a little bit dull. 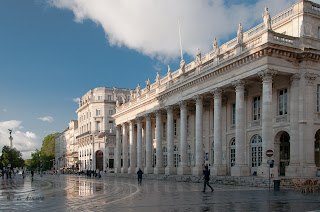 Architecture critic Paul Goldberger once described modern design as the ideal style for creating memorable individual buildings. But, he noted, when combined, those same buildings produced cities that were virtually unlivable. On the contrary, the astonishing thing about Classical architecture is that when you put dozens of similarly unremarkable buildings together, the result is extraordinary. In Bordeaux, the homogeneity of the style and the human scale (no building is much above five stories) combine with the cream-colored limestone and graceful details to produce a seamless cityscape that  at times feels as unreal as a stage set. Victor Hugo found the city so beautiful that he wrote: "Take Versailles, add Antwerp, and you have Bordeaux."

There is perhaps no greater acknowledgement of the city's grace and elegance than the fact that Bordeaux served as the model for the wide-scale 19th century modernization of Paris, which resulted in the world's most beautiful city. Georges-Eugene Haussmann, who was largely responsible for that transformation, had served as a Prefect in the Bordeaux region for twenty years. In 1852 Haussmann welcomed Emperor Napoleon III to Bordeaux where they toured the city together. The following year Haussmann was summoned to Paris to undertake the city's renewal, in which he was no doubt influenced by memories of Bordeaux's classical architecture.

Bordeaux’s designation by UNESCO as a World Heritage site explicitly recognizes the cohesiveness of the city’s architectural patrimony. The criterion for inclusion reads, “Bordeaux, Port of the Moon, represents an outstanding urban and architectural ensemble, created in the Age of Enlightenment, whose values have continued up to the first half of the 20th century. Bordeaux is exceptional in the unity of its urban and architectural classical and neo-classical expression, which has not undergone any stylistic rupture over more than two centuries.”

So there you have it. Finally, an explanation for why I don’t much care for Bordeaux’s individual 18th century buildings, but am absolutely crazy about the city as a whole.