All the Forgotten Faces 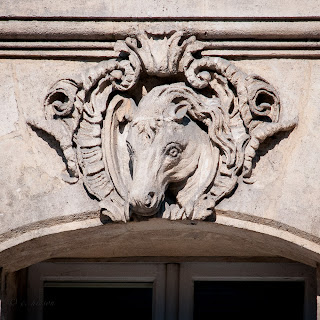 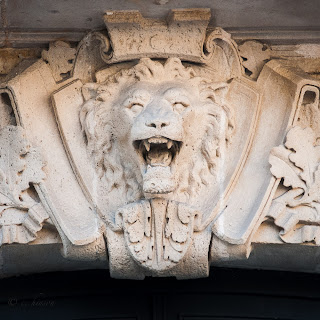 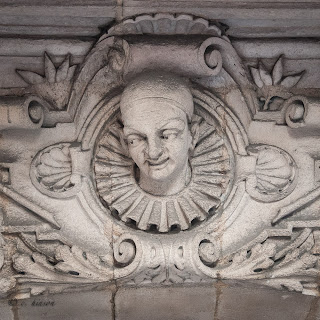 When we first visited Bordeaux I was struck by the number of carved masks that highlight the buildings around town. But when Bruce suggested I buy a book on the subject, I just scoffed. "No way," I thought. "They’re just like all Classical ornament -- pretty, but essentially meaningless." (What an architectural snob, huh?) But recently it occurred to me that a post on these masks would be just perfect for the last gasp of summer. The subject wasn’t too heavy and it provided an opportunity for lots of interesting photos. A fluff piece before tackling heavier subjects like Gothic cathedrals once the weather cools off.

But as I walked around taking pictures, I realized that the masks were much more varied than I had expected. They were even sort of intriguing. And when I started reading about them I learned that not  only do these sculptural elements have a history of their own, but that they also provide a visual testament to the city’s development. So much for this being a fluff piece...

The use of masks began in antiquity, when it was hoped that the grimacing faces and hideous monsters that decorated everything from tombs to household goods would ward off the evil eye. Sometime in the 15th century Italian architects reintroduced the masks as a way to enliven the formality of Renaissance architecture.  At that time the carvings depicted gods and goddesses or other images from ancient Greece or Rome. In France the style was introduced in the 16th century by Italian architects working for Francis I at Fountainbleau.

Throughout the 17th century a distinction was made between masks and mascarons. Writing in 1691 architect Augustin-Charles d’Aviler described a mask as a human face that was traditionally sculpted in the keystone over a door or window opening. The images might represent the gods, the seasons, the continents or more esoteric ideas such as the ages or human temperaments. In contrast, a mascaron was a grotesque image, a representation of something or someone unreal, and was used on doors, grottoes and fountains. The word comes from the Italian ‘mascharone,’ which in turn derives from the Arab word ‘mascara’ meaning buffoonery. 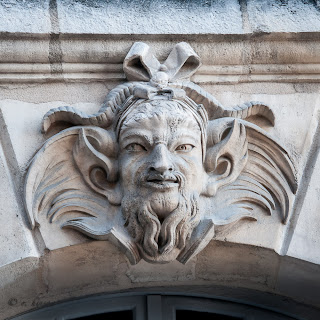 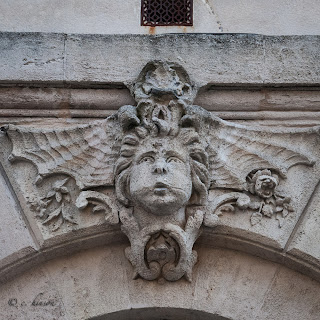 The first carvings appeared in Bordeaux in the late 16th century. One of the earliest was the sculpted likeness of Queen Marie de Medici who had visited the city for the marriage of her son Louis XIII in 1615. The three masks below, which are smaller and more refined than the later versions, date to the 17th century.  In Bordeaux alone over 3,000 examples have been created with subject matter ranging from gods and goddesses to mythological creatures, witches, angels, clowns and animals both real and imagined. 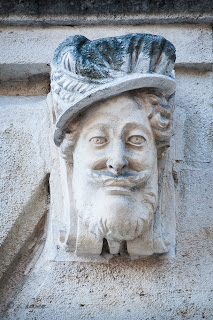 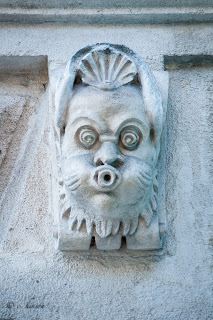 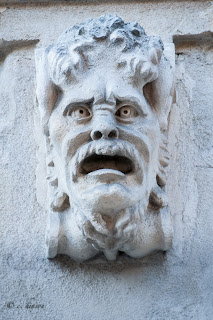 These masks are often more than merely decorative; the more interesting trace the social and economic development of the city from the 17th century to the present day. The importance of Bordeaux’s wine industry can be read in the numerous figures of Bacchus and the many carvings that feature grapes and grapevines. The city’s role in the slave trade is evidenced by a handful of images of African men and women.  And several of Bordeaux’s leading Jewish families built houses ornamented with stars of David. 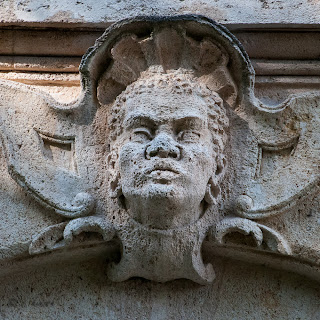 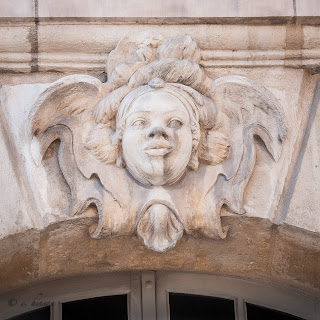 By the end of the 19th century the Masonic Temple in Bordeaux had over 2,000 members. A number of Masonic images are carved into the facades of city's buildings, but they’re obvious only if you understand the symbolism involved. I'm sure there's a lot that remains secret, but it has been published  that a man shown wearing a turban is a Masonic initiate, while those gents in hats have attained the rank of master mason. Near the Porte Dijeaux are two fascinating images, both showing the same man. In the first (below left) he is bareheaded and being gazed upon by the moon, while in the second (below right) his head is covered and he is being regarded by the sun. Taken together the two masks are a Masonic reference to leaving the darkness of ignorance and coming into the light of knowledge. 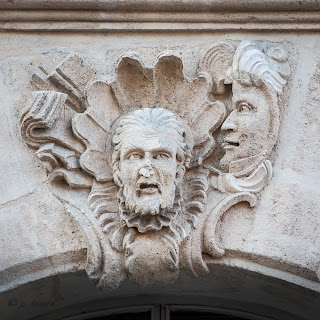 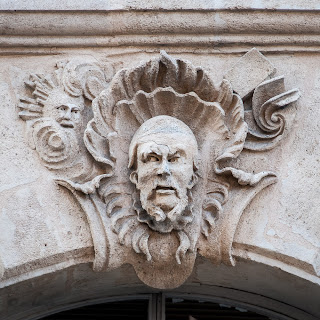 Yet another image, carved within the past thirty years, shows a man with his hand at his throat, thumb up, which is a depiction of the Masonic saying that it is better to have one’s throat cut than to divulge the fraternity’s secrets. Interestingly though, he's not wearing a hat. 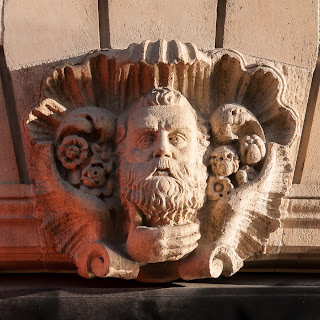 It's impossible to know how many of these images are portraits of actual people or have symbolic significance. Although books have been written on the subject, none seems to have been thoroughly researched and I think that the definitive book has yet to be written. In the meantime, it's fun just to notice who (or what) happens to be looking down at you while you stroll around the city. I found 18th century images of Dorothy, the Tin Man and the Cowardly Lion at the Bourse, but I'm still hunting for the rest of the gang from Oz. 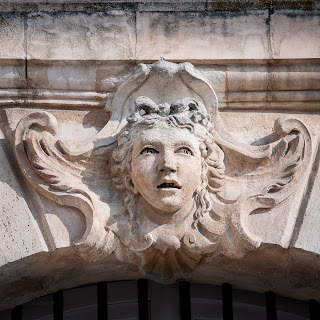 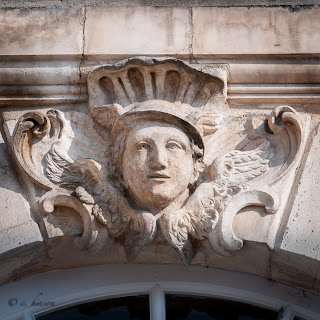 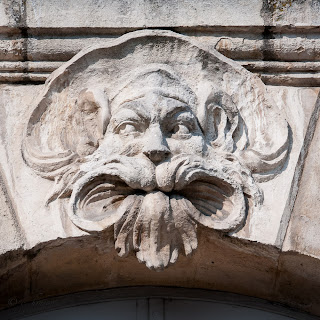