The best thing  (and I do mean the VERY best thing) about France is that on any drive in the country you will stumble upon a charming village, an historic building, or a spectacular landscape that you were completely unprepared for. It happens every time we leave Bordeaux. Before we know it, we’ve turned off the main route and are following a sign that says something like “medieval bridge” or “11th century church”. Or, as in the case of the Moulin de Puy, a small, nondescript sign that simply said “windmill”.

We followed the easily missed arrow up a narrow winding road, never sure that we were headed in the right direction, until we reached the top of a low hill. And there, sure enough, was a beautiful little windmill glowing orange in the late afternoon sun. 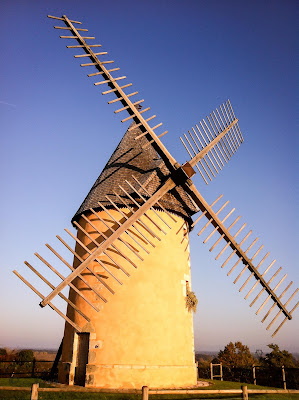 As it turns out, this was one of two mills that were located on the hilltop. The other, too damaged to restore, was left to deteriorate at its own pace. But an ardent group of locals, Les Amis du Moulin du Grand Puy, had put heart and soul into restoring the second mill and the adjacent miller’s house. Described on the website as “stubborn as Bretons” the group had insisted on an accurate restoration. Stucco of local lime and red sand containing small pebbles was hand-applied to the masonry tower and the conical roof is covered with hand-planed chestnut shingles. Our enthusiastic young guide explained that the entire roof assembly turns to catch the wind and that seven different types of wood were used in the mill's construction - each chosen for a specific characteristic: durability, strength, insect-resistance. 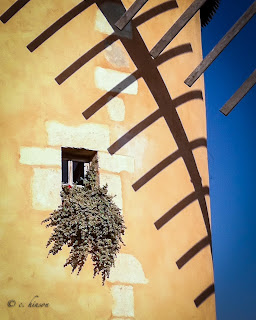 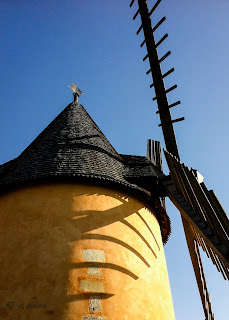 The history of the mill is a little unclear. A stone dated ‘1820’ is mortared into the tower, but many believe the masonry tower to be decades, perhaps centuries, older. A map from 1780 shows two windmills on the site. More surprisingly, in the 16th century a local resident recorded the mill's construction in 1598.  This is not implausible as Notary Records indicate that other area mills were in operation by 1556, and a mill in a nearby canton dates to 1597. Regardless of when it was constructed, the last person to own and operate the mill was Guillaume Gombaud who stopped milling in 1865. After that the building gradually fell into disrepair until the site was purchased by Les Amis and restoration was begun in 2002.

The mill is fully operational now and they grind several different types of grain. The miller’s house is used for art exhibits and contains the sales area. That’s where I bought the corn flour that I used at Thanksgiving to make my cornbread dressing. Even though the French don't really seem to understand or appreciate corn, that flour, freshly ground the weekend before, made really good cornbread.