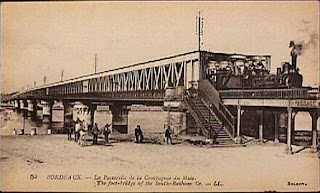 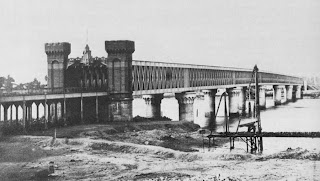 Until the construction of Bordeaux's second bridge there was no direct rail service from Paris to the region south of the Garonne. All of the railcars coming from the north had to be ferried across the river to Bordeaux's St. Jean Station before continuing on to Bayonne and the fashionable resorts that were springing up along the Atlantic coast. Each ferry had to wait for low tide before squeezing carefully through the arches of the Pont de Pierre, adding hours to every voyage and inconveniencing travelers in much the same way that the lack of a bridge had delayed Napoleon half a century earlier.

But in 1860 the two banks of the Garonne were permanently connected by a cast iron bridge, finally enabling rail passengers to travel easily from Paris to Bordeaux and further south.  The construction of this bridge was the first project of Gustav Eiffel, the 26-year old railroad employee who oversaw its completion. 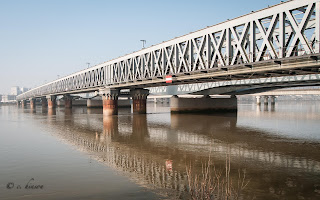 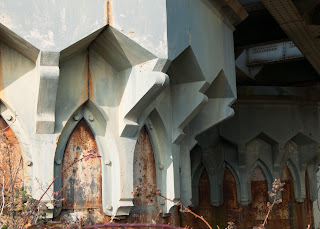 In 1855, after finishing a university degree in chemistry, Eiffel became the secretary of Charles Nepveu who specialized in metal construction. Because of iron's light weight, fire resistance and cost effectiveness compared to stone, it was rapidly becoming the construction material of choice, especially for use in bridges and structural skeletons.  Eiffel's work in Bordeaux gave him valuable experience with the new material and he followed that success with the design of a number of cast iron bridges throughout Europe.

The Bordeaux project was a 1,600 foot long girder bridge carried on six pairs of piers that rest directly on bedrock. In order to construct the piers in the tempestuous Garonne River, Eiffel used compressed air caissons and hydraulic rams, both of which were extremely innovative at the time. (The same technologies were used in constructing the Brooklyn Bridge about 15 years later.) The pont metallique, or metal bridge, was originally designed for rail traffic only, but in 1862 a footbridge was added to the east side. Unlike the Pont de Pierre that levied a toll of one sou on each pedestrian, this crossing was free. The walkway, called a passarelle in French, was so popular that it gave the bridge its nickname - le Passarelle Eiffel - by which it is still known. 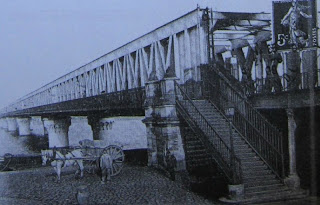 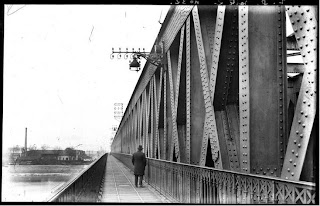 Empress Eugenie, the wife of Napoleon III, was the first rail passenger to cross the Garonne and during the next 150 years the bridge witnessed the evolution of rail travel from steam engines to the advent of today's high speed TGV. By the 1990s there were over 80,000 crossings a year, and as traffic increased the bridge, with only one track in each direction, was a source of so many delays that it became known as "the Bordeaux bottleneck." Because of the design there was no possibility of widening the structure and in 2008 a decision was made to demolish Eiffel's bridge and construct a new one. With the demolition of the pedestrian staircases a movement to save the structure was sparked.  Members of the Eiffel family established a blog raising awareness of the passarelle and its proposed fate. That was coupled with significant pressure from UNESCO, who threatened to remove Bordeaux's prestigious World Heritage status if the bridge was demolished. 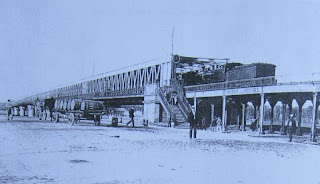 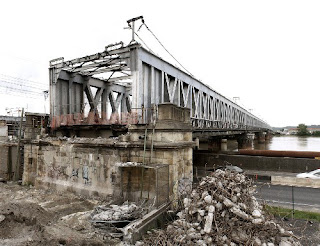 Finally, in 2010 the bridge was classed as a local historic monument and saved from demolition. Yet by that time both ends of the structure had been destroyed to prevent public access, and the future use now remains in question. Suggestions for re-use have ranged from a combination walkway/bike path, to a restaurant or an Eiffel museum. Most ingenious was the idea to stand it on end and create Bordeaux's own Eiffel tower! Instead, the structure languishes unused, in large part because a new railroad bridge was constructed only a few feet away. The adjacent bridge blocks the view down river and access to the Passarelle is difficult because of the constant rail traffic.

However, late last summer the Passarelle Eiffel was decorated with a permanent lighting scheme that finally acknowledges the iconic structure for what it is -- a significant element of Bordeaux's historic landscape and the first major major work of France's greatest structural engineer. 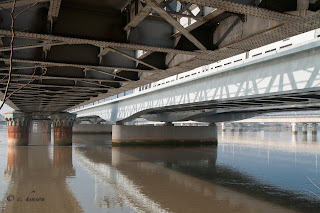 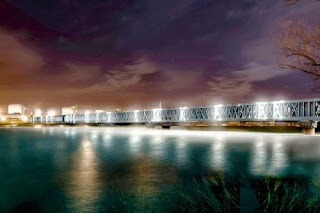 And that's the end of my three-week exploration of Bordeaux's most interesting bridges. Each of the three structures represents a particular moment in the city's long history. Each is an example of a masterful use of material - stone, iron and concrete. And each conveys the design ethic of its time, ranging from the classical arches of the Pont de Pierre, to the industrial iron trusses of Eiffel's railroad bridge, to the clean contemporary lines of the Pont Chaban-Delmas. Together they provide a brief lesson in the architectural, engineering and aesthetic developments of the past two centuries. (And I conveniently left out all discussion of the bridges from the 1960s and 70s - eyesores all!)