Who put the 'Rome' in Romanesque? 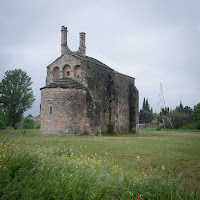 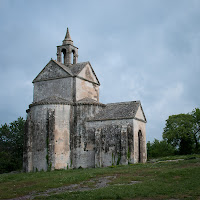 We just spent a week in Dijon and toured a lot of the surrounding region. Now it just so happens that Burgundy is world-famous, not only for its wine but also for its Romanesque architecture. I visited elaborate cathedrals, little chapels, abandoned ruins (like the two above), isolated abbeys and pilgrimmage churches, all in the Romanesque style and all built about 1000 years ago.  Bruce, par contre, was usually in the cafe next door, waiting (pretty patiently) for me to rejoin him in the 21st century.

So for the next few weeks, I'll be writing about the history and architecture of the most remarkable of these churches – Tournus, Vezelay and the Abbey at Fontenay. But before I talk about these churches individually I’d like to explain a little about the evolution of Romanesque architecture, how it got its name and some of its particular characteristics. (Please note that you should be able to click on any picture to enlarge it...)
Why is this building style called Romanesque? Who gave it its name? Certainly not the folks who were building in the 11th century.  Instead, it was historians writing in the 19th century who coined the term, because the form of these churches was based on the basilica, a building type that had been common throughout the Roman Empire.

Once Christianity was legalized by Emperor Constantine in 313, the faithful began to look for appropriate places to hold their services. (Prior to this, in order to escape persecution they had usually worshipped in private houses.) Obviously Roman temples were out of the question, not only because of the pagan connotations, but because they tended to be small buildings incapable of holding more than a few people. Instead, they turned to the basilica, a type of public building that was particularly well adapted for use by large groups. Each Roman town had a centrally located basilica that served as a multi-purpose meeting place, community center and ad hoc court of justice.

Basilicas were rectilinear in form with a long central space and narrow bays on either side separated by rows of columns. These bays were often lower than the central section, which allowed for the installation of clerestory windows high in the sidewalls. A raised podium containing a seat for the local dignitary was often located at one end and the entire space was covered by a flat wooden ceiling.

As Christians adopted the basilica form they began to alter it to suit their own particular needs. The first modification was to orient the building along an east-west axis with the entrance located in the west façade. The apse, which took the place of the raised podium, was located at the east end of the building, towards Jerusalem. A wide aisle known as a transept ran from north to south and separated the worshippers in the central nave from the ceremony that took place around the altar. Viewed in plan, the nave and transept also created a cross-shape that was highly symbolic to the new religion.  At the east end of the building a walkway known as an ambulatory circled the apse. This enabled visitors to view the relics in the altar area without disturbing the services. As time passed and the numbers of pilgrims grew, the ambulatory became larger and the relics were placed in individual chapels that radiated off of the east end of the building.


The most important of the early basilicas was the original Saint Peter's in Rome, consecrated by Emperor Constantine in the 4th century. This, the mightiest church in Christendom, became the model for ecclesiastical buildings throughout Europe and encouraged the spread of the basilica form. 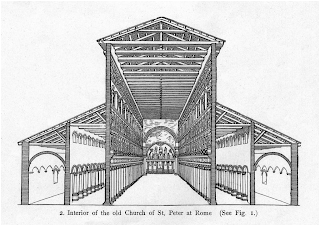 By the early 11th century century the basilica had developed into the form we see today. The style is characterized by the central nave/ side aisles/ apse/ ambulatory/ chapel form described earlier. Their simplicity give these churches a unified, harmonious appearance vastly different from the Gothic style that would follow. But what really marks the true Romanesque style was the development of the masonry barrel vault that replaced the original flat wooden ceilings. The use of stone vaults in place of wooden trusses meant that the churches were more resistant to fire. And more importantly the buildings could be significantly larger as the size of the nave was no longer determined by the span allowed by timber construction.

In addition, Romanesque churches are known for their very distinctive decoration. Elaborate sculpture is usually found over the entry doors and around each column capital. Originally the interior surfaces and much of the exterior ornament were also brightly colored and both the painting and sculpture served as a pictorial Bible for a congregation that couldn’t read.

Few of the paintings have survived 900 years of damp, and much of the sculpture was damaged in the Revolution. But the decoration that remains is delightful. Smirking demons bite the heads off of wayward sinners; Mary and Joseph escape to Egypt on a much-too-small donkey; grinning snakes beckon to Eve; God appears in clouds that resemble sunflowers. And accompanying the Biblical scenes are depictions of everyday life in the Middle Ages where people go about their daily chores, butchering hogs, catching fish, sheering sheep.

Although each sculpture is highly individual, they all have a certain heart-warming naïveté. It's the decoration that sells me on this architecture and keeps me constantly intrigued. As Peter Strafford says in his excellent book Romanesque Churches of France, "One of [Romanesque's] main features is that it invites you not just to look at the building as a whole, but to linger over carefully worked points of detail."

Unlike the 11th century worshipper, I seldom recognize the biblical references and most of the symbolism is lost on me entirely. But the skill of those early craftsmen is undeniable, and although I may not be getting the message that they originally intended, I leave inspired and admiring nonetheless.