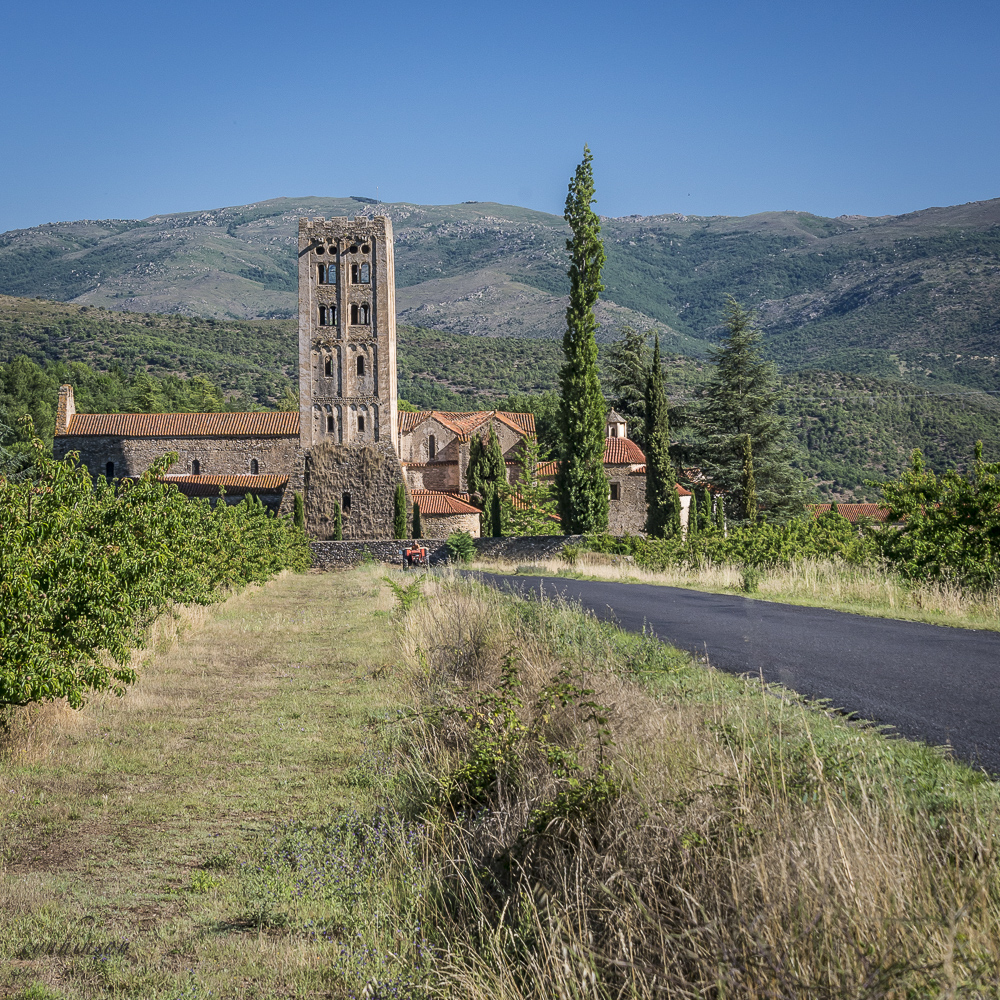 Unlike the Priory of Serrabone, which is perched high on a hillside, the Abbey of Saint Michel de Cuxa sits in a valley at the base of Mount Canigou, one of the highest peaks in the Pyrenees. Currently home to a small group of Benedictine monks, St Michael’s fist sheltered a monastic community in 879.

Completed in 974, St. Michael’s is the largest pre-Romanesque church in France. An enormous basilica-type building with thick stone walls, one of the most surprising aspects of the church is the horseshoe arches that are found in the nave. For years scholars believed that these arches indicated a Moorish influence, but more recent studies have concluded that the builders were more likely to have been influenced by the horseshoe arches found in Classical architecture.


At the beginning of the twelfth century a crypt, ambulatory and twin bell towers were added to the central building. A magnificent marble cloister and a marble tribune were  also constructed and the first school of Romanesque sculpture was established in the Roussillon area. Unlike Serrabone where the human form played a central role in the ornamentation, the carvings at St. Michael’s are notable for the absence of human figures. Only plant motifs and fantastic creatures, albeit some with human
faces, adorn the column capitals. 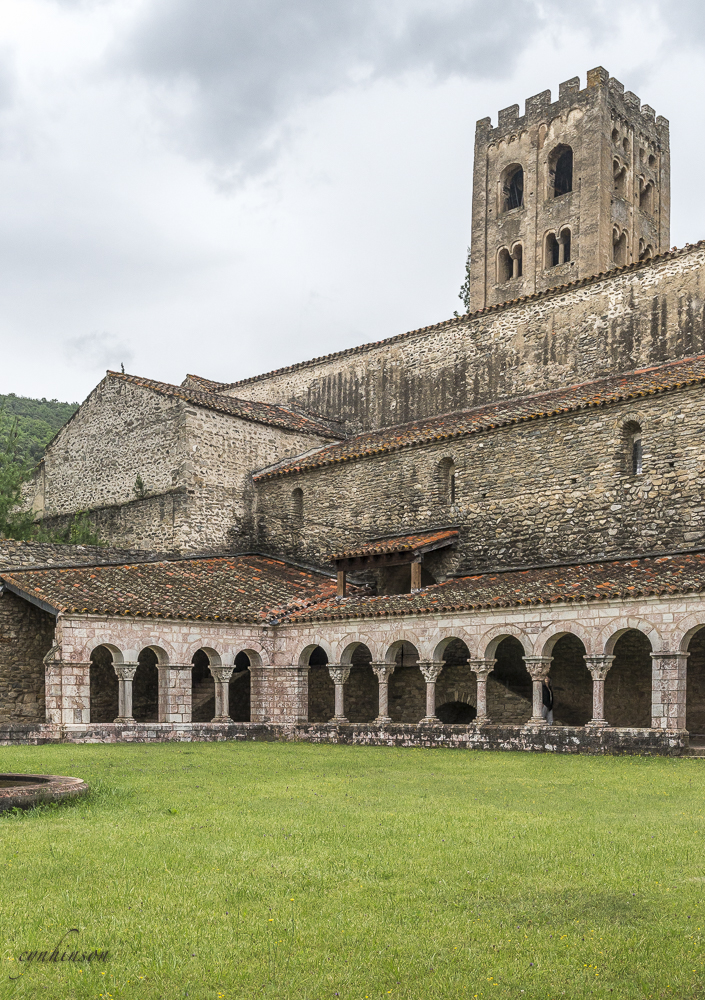 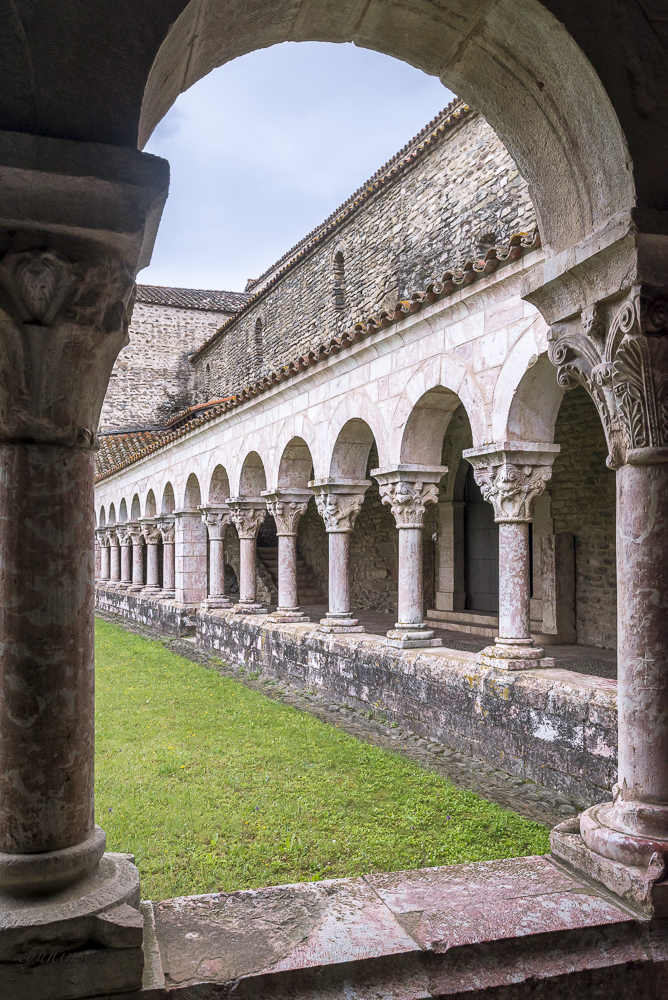 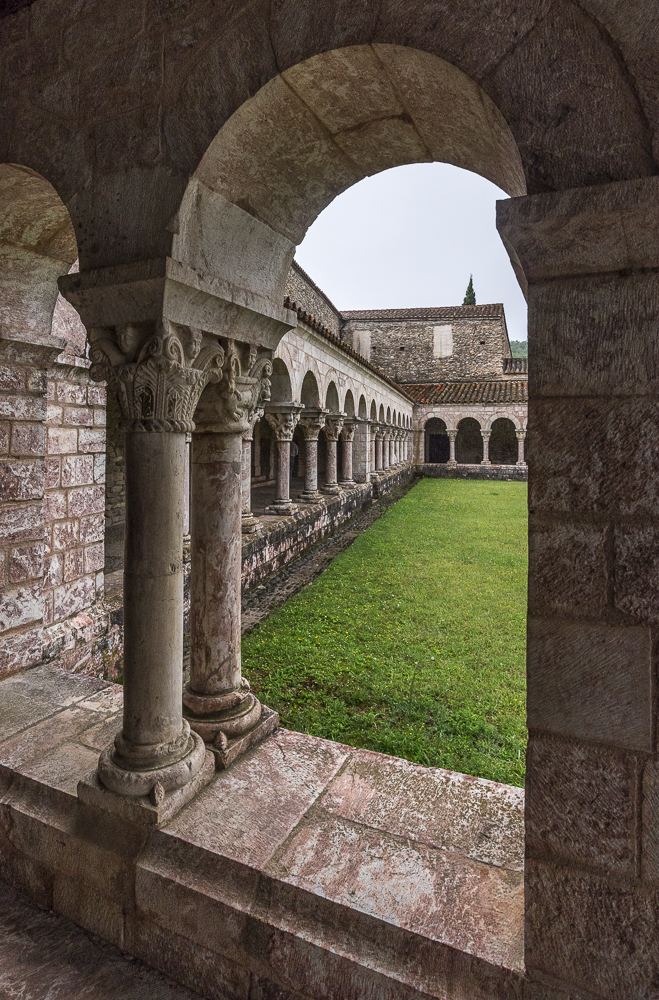 Although the monks at St. Michael's professed to live a communal life, by the 16th century the reality was very different. The monastery's considerable revenue was divided among the brothers according to their job or "office," and each “officer” (such as the Cellerier who was in charge of food supplies or the Sacristan who cared for the sacred objects) maintained his own quarters in the abbey. This watered-down version of monasticism continued until the French Revolution, by which time only eight monks remained at the abbey.

In 1790 the revolutionaries disbanded the church and the abbey was sold to a local family.  Because the new owners were more interested in the land than the buildings, the property quickly fell into ruin. The church roof rotted, the stone walls were plundered for building material and in 1839 the north bell tower collapsed, destroying several adjacent buildings and a section of the cloister.


Over the years the cloister columns and capitals were stolen, relocated or sold off piecemeal. A public fountain in the village of Codalet was adorned with a complete arcade and in near-by Prades the public bathhouse was decorated with a dozen columns and capitals. Several of the artifacts found their way into private collections and by the early twentieth century only the southwest corner of the cloister remained intact. 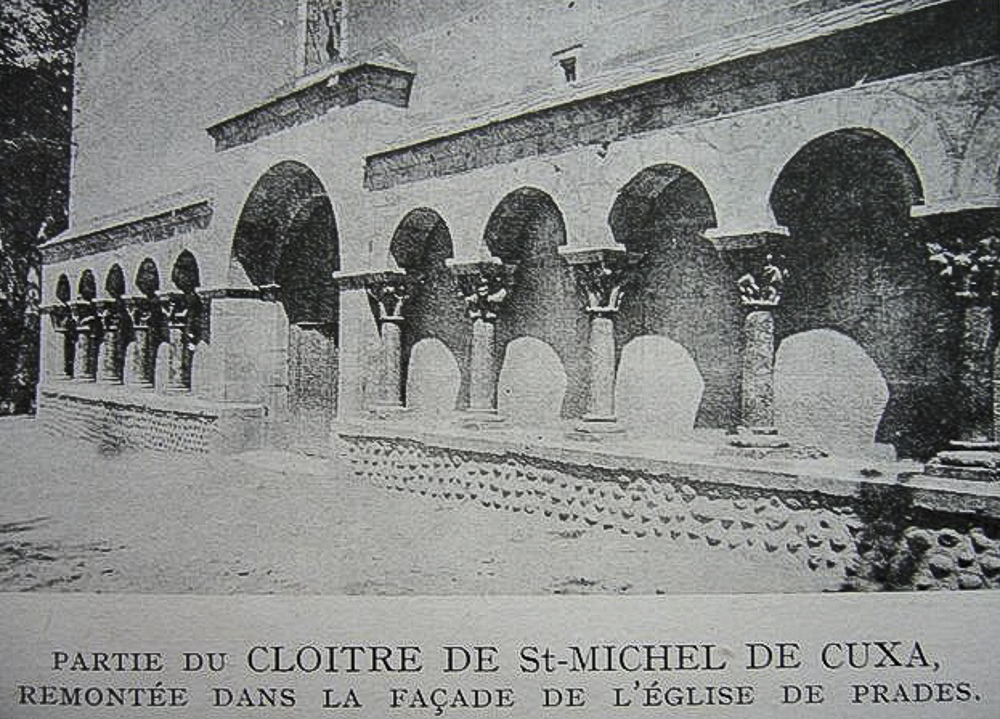 In 1907 an American sculptor and art collector named George Gray Barnard arrived at the monastery with money to buy. And buy he did. Barnard, who had studied at the Ecole des Beaux-Arts in Paris, was extremely knowledgeable about Romanesque sculpture and he realized that the sculptures from St. Michael's were a treasure. Within a few days he had purchased 14 bases, 2 columns and 37 capitals from local residents. He then bought the twelve bathhouse columns but agreed to leave them in place for an unspecified time. At St. Michael’s, despite the fact that the abbey had been listed as a Monument Historique since1862, he struck a deal with the owner and took possession of the last standing section of the cloister. In ten days time Barnard had succeeded in locating and buying the greater part of the cloister of the Abbey of St. Michael’s.

Occupied with other pursuits, six years passed before Barnard returned to collect his purchases. In the meantime local sentiment had changed thanks to the efforts of Edmond Sans, architect of the Monuments Historiques who argued fiercely against removal of the sculptures. Sensing that no good would come of a fight, Barnard decided to “give” the bathhouse artifacts to France in appreciation of the artistic training that he had received there. Then he boarded a boat at La Havre and transported the remainder of his treasures to New York.

In 1925 John D. Rockefeller, Jr. purchased Barnard's entire collection, of which the Cuxa artifacts were only a small portion.  The Cloisters Museum was created in New York City's Bronx, and the design for the building that houses much of the collection was based on the Abbey of St. Michael.


Meanwhile, in 1919 the real abbey was purchased by Cistercian monks who slowly began to restore the buildings, despite severely limited funds. Perhaps the greatest boon to St. Michael's came from Pablo Casals, the Catalan cellist who took refuge in nearby Prades during the Spanish Civil War. For many years, to protest the fascist regime, Casals refused to play in public.  But in 1950, when he at last relented, Casals gave his first performance in the ruined nave of St. Michael’s, with the ceiling still open to the night sky. In subsequent years the monks were able to reroof the abbey church and rebuild a section of the cloister using original material that was 'rediscovered' and returned to the Abbey. And thanks to their efforts, St. Michael’s Abbey now outshines that upstart in the Bronx.