Earlier this month we spent some time in the Pyrenees Mountains, so the next two or three blogs will be dedicated to some of the things we saw in southern France and northern Spain.

The Pyrenees is a wild region with small villages clinging precariously to mountain slopes and oppressive fortifications from the long struggle between France and Spain.  Despite the rocky, in places almost lunar, landscapes, the area has been inhabited since prehistoric times. Today, life in these remote mountain villages can be inconvenient, but in the Middle Ages it must have been unbearable: cold, barren and isolated.

So what better place to put a monastery? If your professed intention was to get away from it all, to remove yourself from worldly temptation and to work hard for the Lord, no place could have been more fitting than the Pyrenees. And sure enough, on our recent visit we found that everywhere we looked, on nearly every peak, no matter how isolated, there was a church, chapel, hermitage, monastery or abbey.  Of these, one of the most noteworthy is the Priory of Sainte Marie de Serrabone.

To reach the Priory you drive for about 30 minutes straight up from the valley on a narrow road with hairpin turns and unprotected vertigo-inducing drops. In order to keep from thinking about those missing guardrails I found myself wondering how long this ascent took in the days when it was made on foot, or at best on horseback. Then I wondered how they had managed to haul provisions up the steep incline and hoped that the priory had been entirely self-sufficient.

Throughout the long ascent the priory remained concealed. It was only once we parked and started out on foot that the building finally loomed into view – an imposing structure constructed of the local gray-green schist that seemed to grow out of the surrounding rocks.

The first monastery was established here in 1052 when Pierre Bernard and fifteen other monks following the order of St. Augustine built a simple church with a single vaulted nave. Benefitting from the support of the local Vicomte de Conflent, the religious community at Serrabone grew quickly and by 1151 had become a priory with a cloister, dormitory and refectory buildings. At this same time the small church was enlarged to its present form. Following several centuries of prosperity Serrabone's fortunes began to decline and in 1612 the priory's last monk was buried. For the next two hundred years the abandoned buildings sheltered only vagrants and shepherds and the site gradually fell into ruin. But in the early 19th century, thanks to the efforts of local resident Jaubert de Passa, the abbey came to the attention of archeologists and scholars concerned about the rapid destruction of France's architectural heritage. In 1834, Prosper Merimée, chief architect of the newly created Monuments Historiques, visited the site. Thus, Serrabone became one of the first officially recognized historic monuments in France and two years later the first consolidation of the buildings was begun. 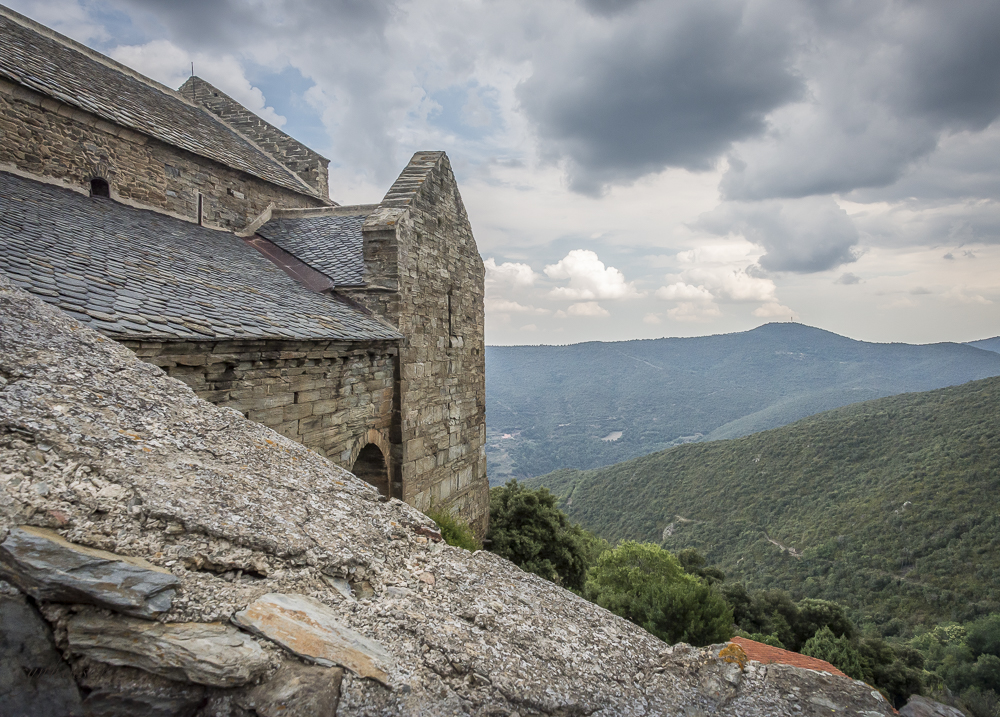 The present day visitor enters through the gift shop (number 1 in the plan above) directly into the cloister, a covered exterior walkway (number 2). Because the priory is constructed on the side of a mountain, this cloister seems to hang in mid-air;  only the paired columns separate the passage from the valley beyond.  The columns with their fantastically carved capitals are of pink marble, and the rosy color creates a surprising contrast to the rough schist walls. 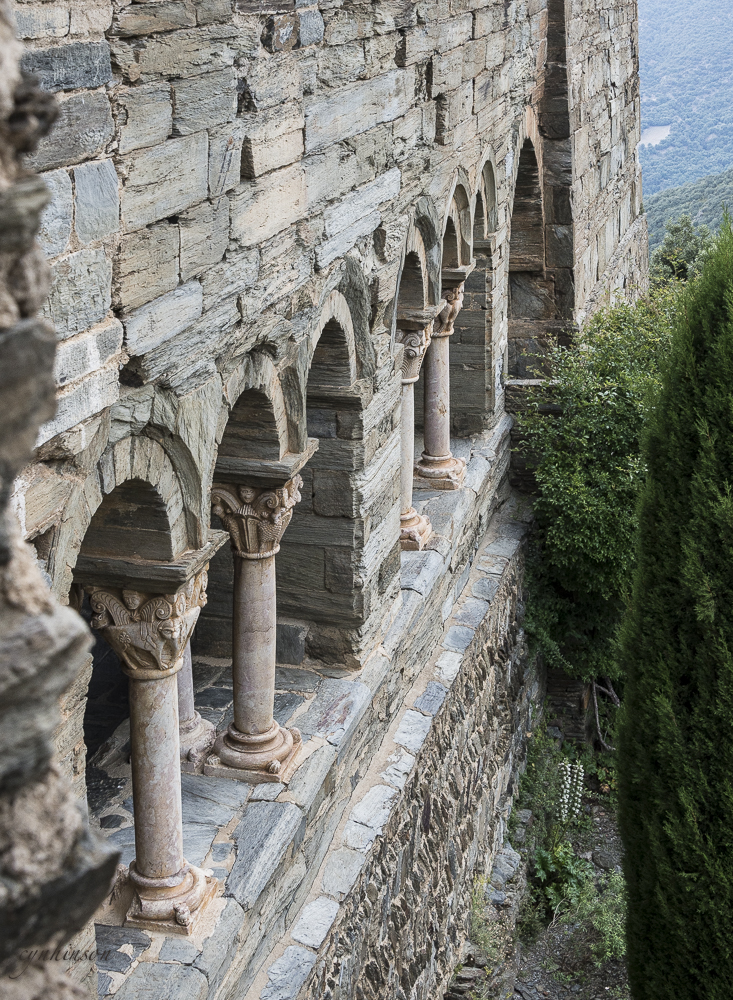 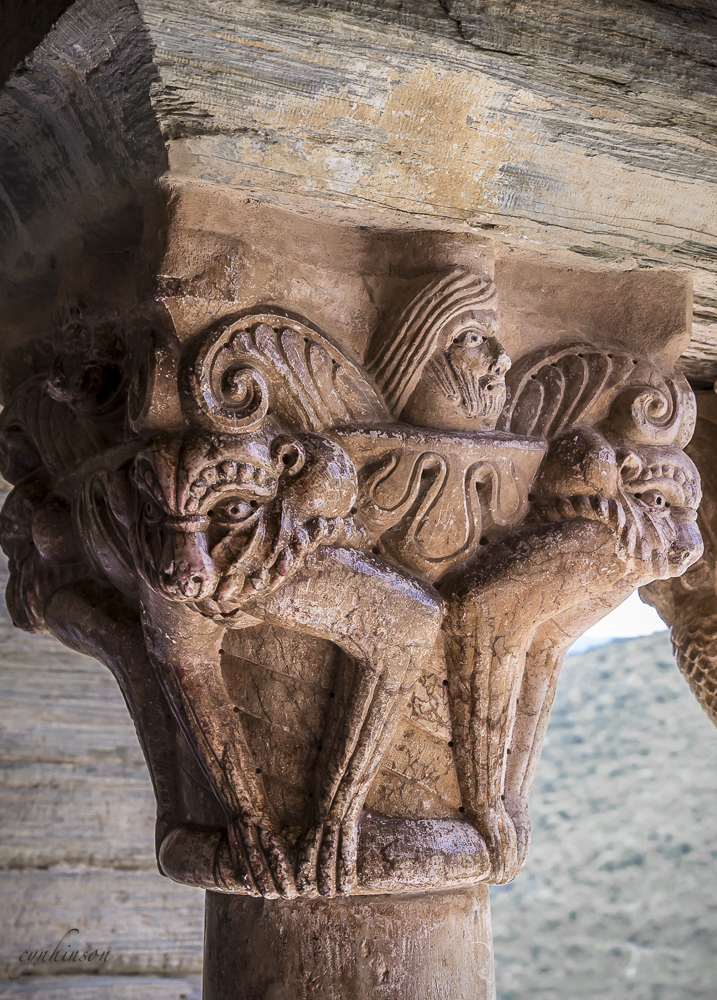 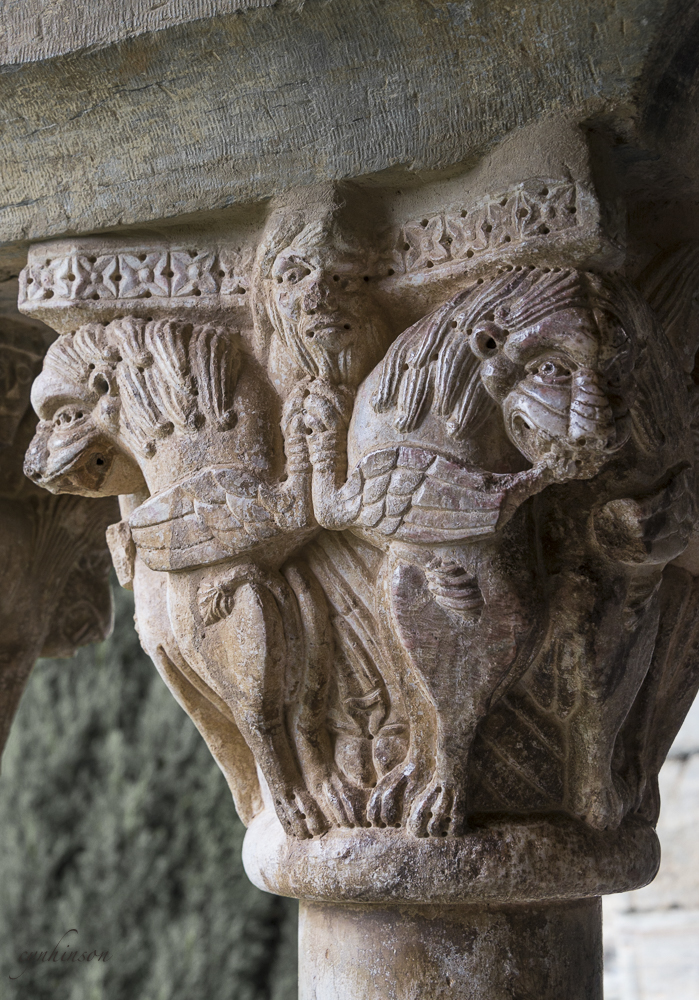 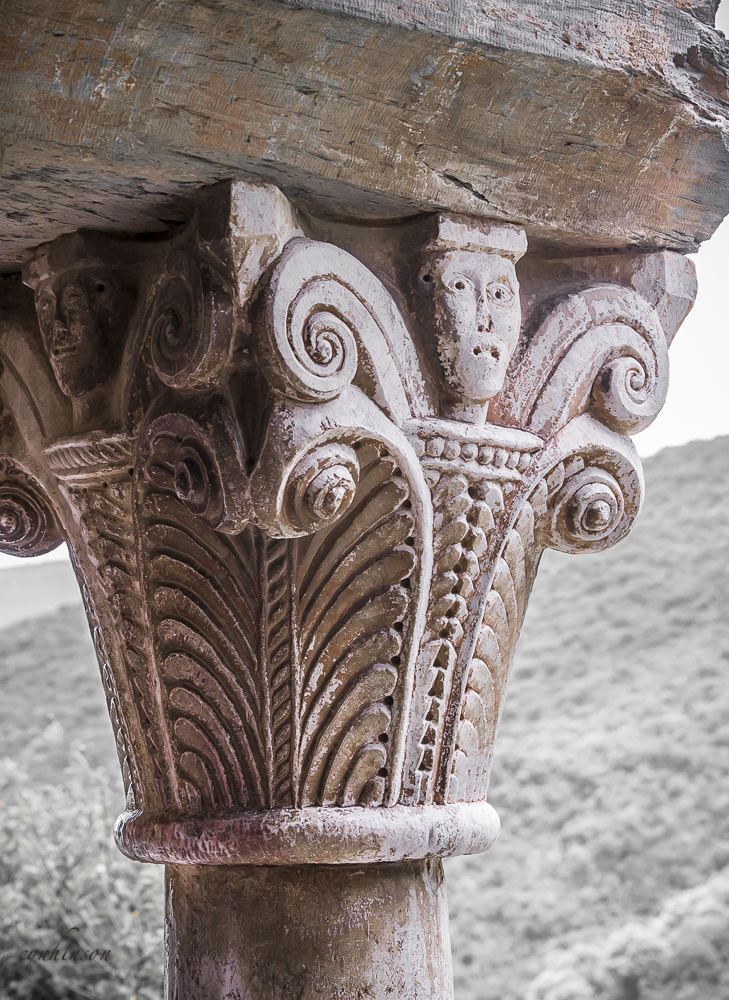 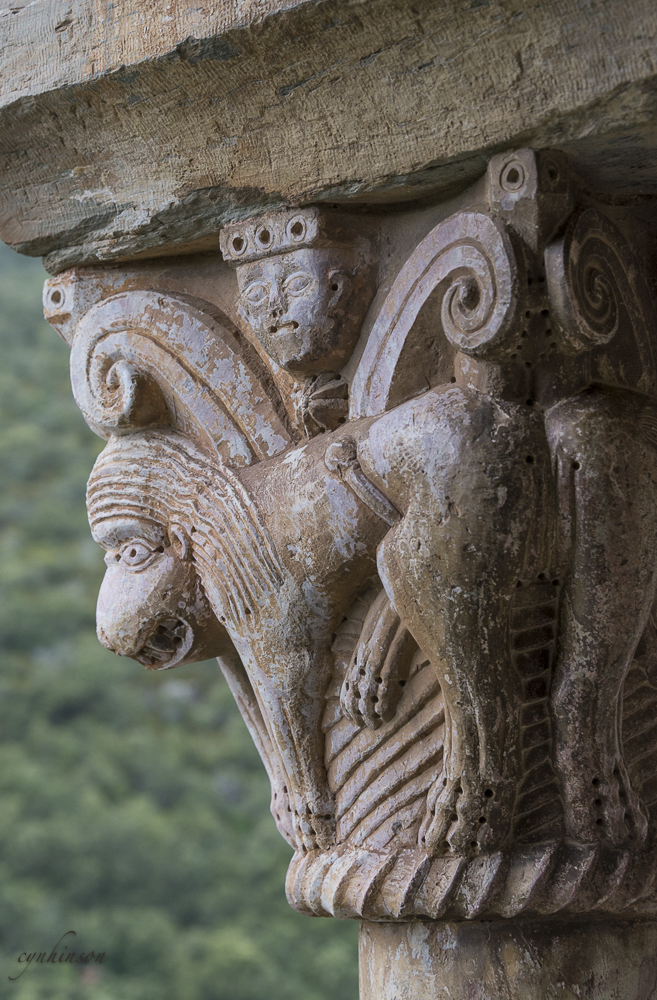 Perhaps the most impressive feature of the priory is the elaborate stone screen (called a tribune) that divides the original nave into two sections. Like the cloister columns, the tribune was completed in 1150 and is carved of the local pink marble. Considered the most remarkable example of Romanesque sculpture in the Catalan region, the tribune consists of three arcades surmounted by an elaborate cornice. The low relief carvings are of Christian symbols taken from the text of the Apocalypse. Shown from left to right are two seraphim - angels with large outstretched hands whose wings cover their bodies; the lion of St. Mark together with the eagle of St. Jean; and the lamb representing Christ with the winged man, symbol of St. Matthew. (Note: It's worth clicking on the picture of the seraphim to see them enlarged. 'Reminds me of the Supremes (how appropriate!) and "Stop, in the Name of Love.") 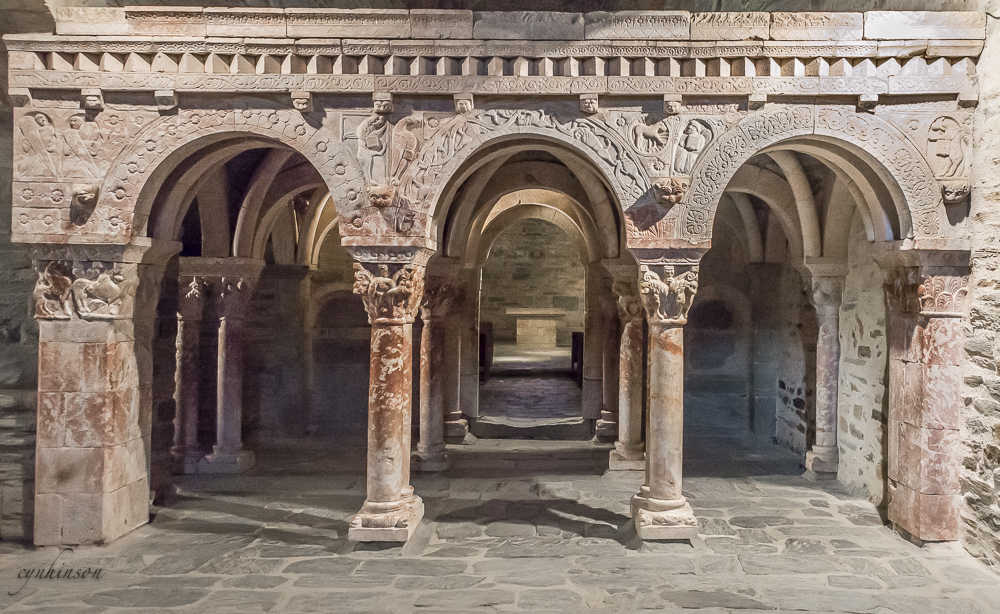 Though no longer used, the the main entrance also features a beautiful surround carved of the local pink marble, complete with two additional carved column capitals. (Located at number 7 on the floor plan.) Very little of the carving at Serrabone is literal. Except for one capital that shows Saint Michael the images are entirely symbolic. Lions, eagles, monkeys and other fantastic animals abound, along with many human forms. The latter is in direct contrast with the subject of my next blog post, so please stay tuned for the Abbey of Saint Michael of Cuxa..... 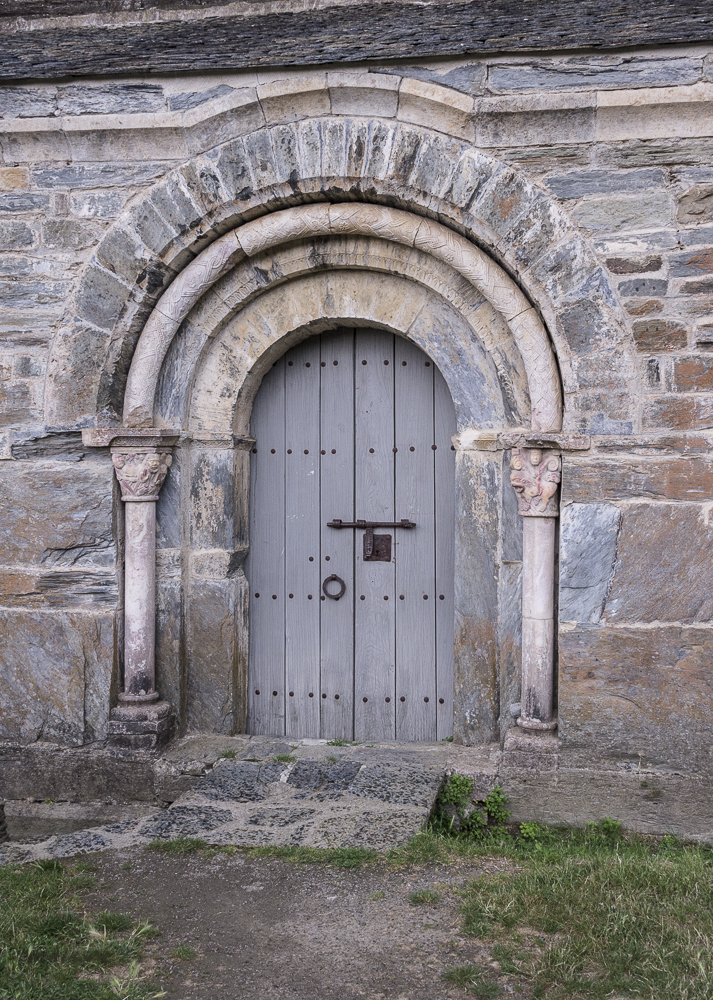 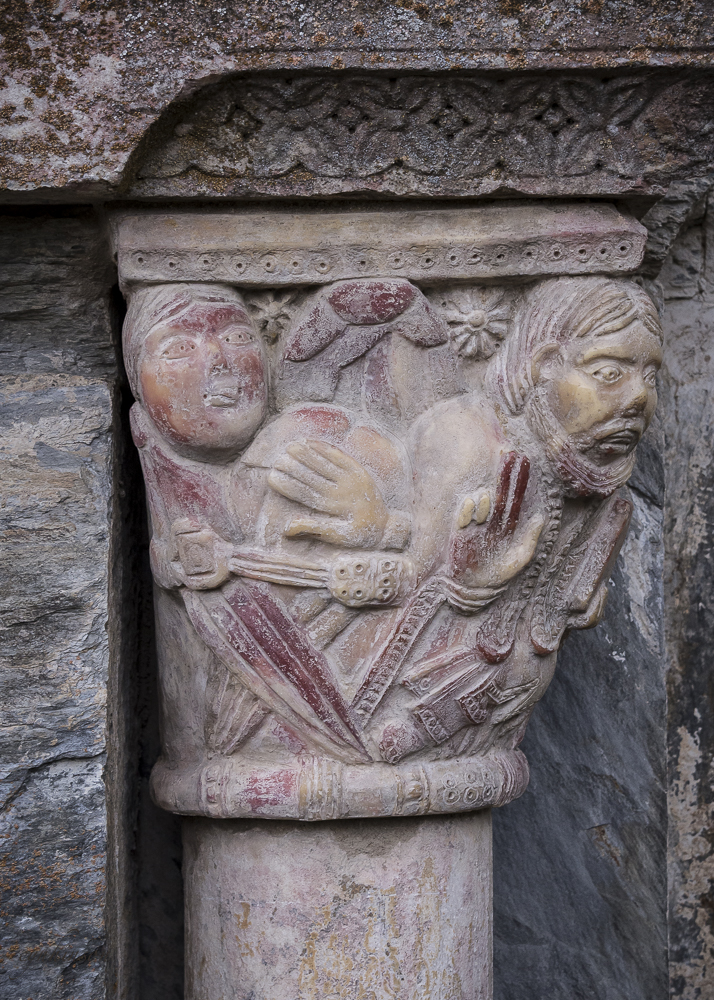 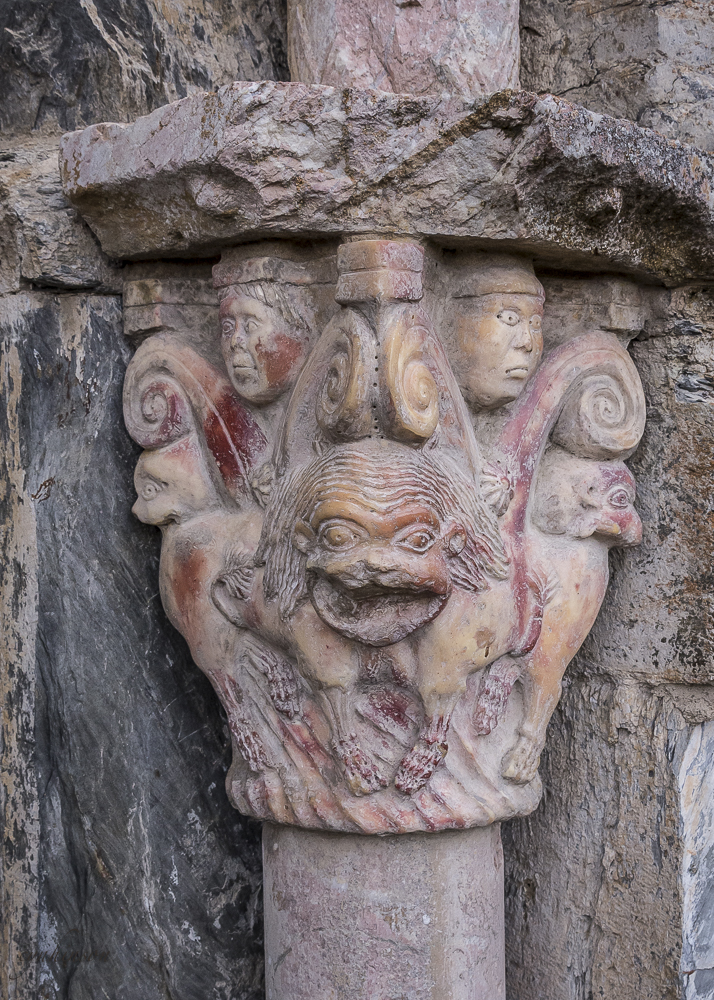