The Grand Mosque of Cordoba

We recently spent two weeks exploring Andalusia, the area in the south of Spain that was occupied by Islamic Moors for about 800 years. Now, I went to Alhambra High School, and was a junior varsity cheerleader for the mighty Moors. And despite the soul-searing disappointment of never becoming a VARSITY cheerleader, I remained fascinated by the Moors and their conquest of Andalusia.  But it wasn't until I started reading up for our trip that I learned the full extent of their contributions to European civilization. (Goooooooo Moors!) 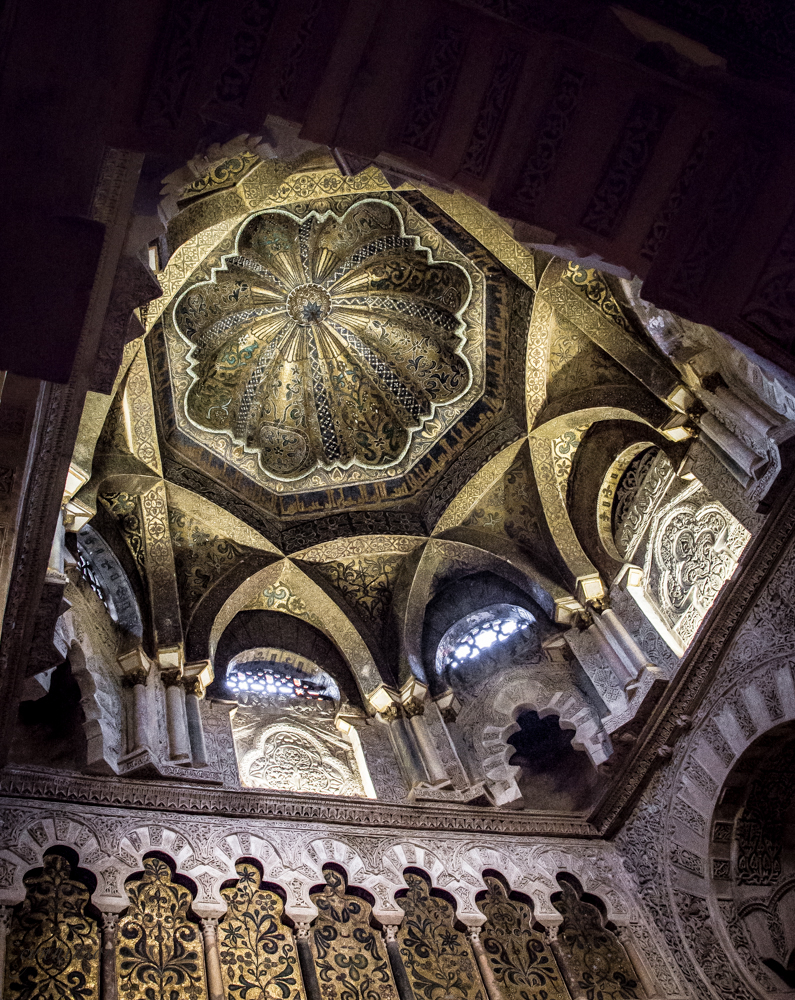 Many historians have argued that Spain reached its high point, both politically and culturally, under the Moors. During their occupation, which spanned from approximately 700 to 1500, dozens of important mosques and universities were constructed, along with schools and libraries that were open to the public. Music and poetry were highly regarded, and mathematics, medicine, astronomy and physics were studied.  Granada, Seville and Cordoba grew into large cities with diverse Muslim, Jewish and Christian populations who practiced their religions freely. In short, "while Europe was languishing in the depths of the Middle Ages, a far superior culture was thriving in Andalusia."*

Nowadays the most visible reminder of the Moorish occupation and the subsequent Christian reconquest are the interesting Islamic/Christian buildings that remain. The Alhambra in Granada and Seville's Alcazar are perhaps the best known examples of this hybrid architecture. Another of the most iconic buildings in Andalusia is the Mezquita of Cordoba, otherwise known as the Great Mosque, or the Mosque-Cathedral.

Construction of the mosque was begun soon after the Arabs made Cordoba their capital in 756. The site chosen had originally held a Roman temple; this was later replaced by the Visigothic Church of Saint Vincent. Initially, the Arabs used half of St. Vincent as a mosque and left the other half to the Christians. But by 785 the Muslim population had grown so large that the entire site was appropriated and construction of a new mosque was begun. In the following centuries Cordoba’s population reached over 500,000, and the mosque was repeatedly enlarged to meet the demand.

The word mosque is Arabic for ‘place to prostrate,” and this act of submission to God forms the core of Islamic worship. Regardless of its size or location, each mosque is built on the same general plan. A minaret or tower provides the muezzin with a place from which to call the faithful to prayer. A central courtyard contains a fountain or basin for the ritual cleansing of the face, hands and feet. Inside, worshippers turn their faces to Mecca, and to indicate the proper direction there is a niche in the wall called a mihrab, the most important part of every mosque.

The Mezquita of Cordoba originally followed these basic design principles. After the Christians conquered the city, the mosque was converted to Catholic use, with no major alterations made. In 1523, however, the church chapter authorized the construction of a cathedral in the interior of the mosque. Despite the City Council's threat to punish the architects and craftsmen with the death penalty if they started work on the project, dozens of columns were immediately removed.  A cruciform church was then constructed in the very heart of what had been one of the largest, most beautiful mosques in the world. Although the church is architecturally significant in it’s own right, it is an intrusion here. Three years later, when Spain’s Charles V visited Cordoba, he cried, “You have destroyed something that was unique to this world and replaced it with something that can be seen everywhere."


The alterations have significantly changed the mosque, making it very difficult to understand exactly how the original building appeared and functioned. The first major difference is that the mosque was originally open and accessible to the public. The exterior wall now acts as a barricade and there is only one entrance into the courtyard. But as originally designed, the perimeter wall contained a number of openings and the public came and went freely.  Townspeople used the open courtyard as a park, scholars gave lectures and discussions were held under the arcade.


The second difference concerns the gloom that now pervades the interior. The wall that currently encloses the courtyard side did not originally exist, and sunlight penetrated more deeply into the mosque. Once the wall was constructed the space became dark and dismal, and it now appears as little more than a hard-to-navigate, confusing sea of columns.


Those hundreds of columns are truly the emblem of the Mezquite. Of the 1100 supports that originally graced the interior, only about 600 remain. Each is unique, having been reused from Roman and Visigothic buildings throughout the region, and they make a lovely sight with their double-arched tops of alternating red brick and white limestone.  However, they do not resemble anything even remotely Christian and their use reflects a significant difference in the practice of the two religions. A Christian basilica groups the congregation together, facing a single point at the front of the church. In Islam, however, the worshipper's location becomes the center of the room, or of the world, and this is reflected architecturally in the rows of identical columns that have no fixed center. In this way the worshiper’s eyes are not drawn in any one direction; rather they are left free to wander. 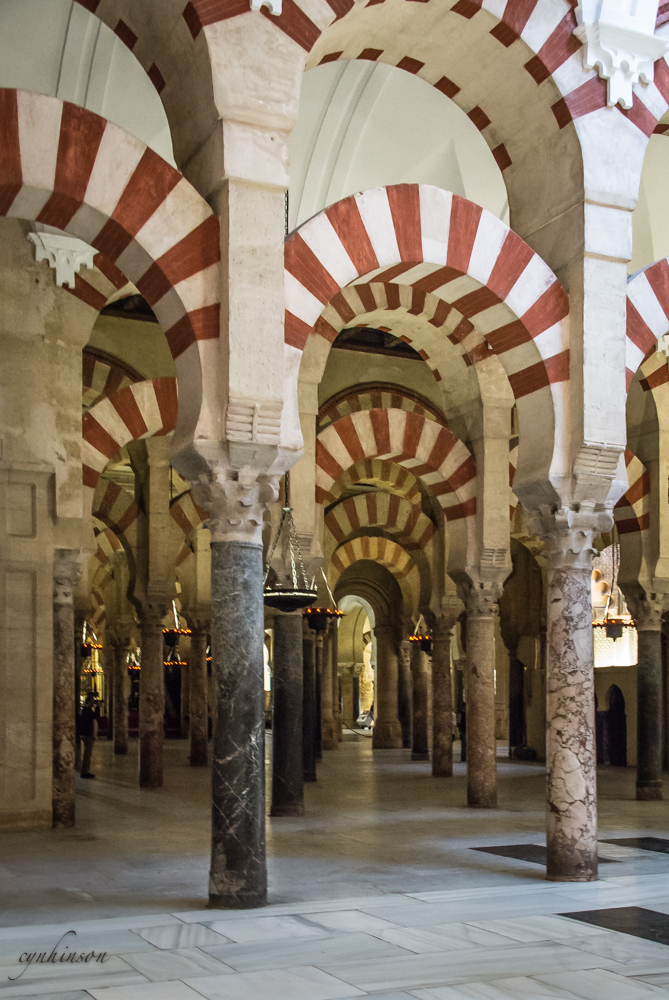 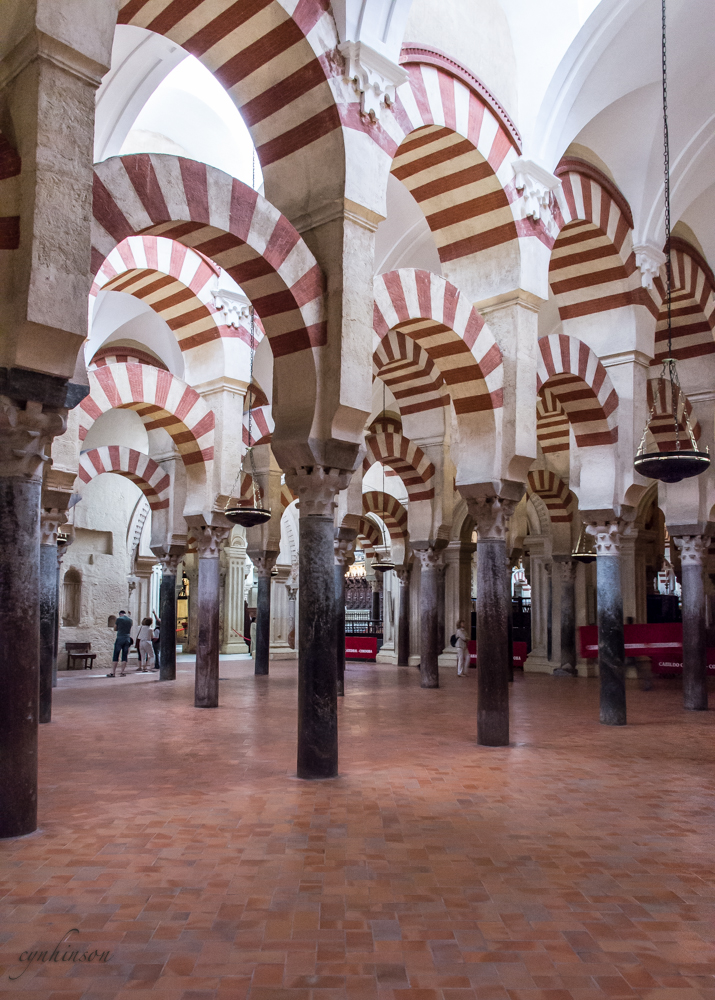 That completes the first installment of 'Moorish Architecture Month' here at archi-trouve.  Next time we'll visit the Alhambra (home of the mightiest Moors) in Granada.

* quoted from Brigette Hintzen-Bohlen's Analusia: Art & Architecture, a good introduction to the area.