It's not just the wine that's fortified...


We're back in Bordeaux after visiting the States for a few weeks and I’m ready to start the second year of archi-trouve. I’ve decided to try a couple of things differently this year. To make archi-trouve more useful for those who might want to visit some of these sites I've decided to include a map with each blog post. (I'll do that just as soon as I figure out how.)

Also, I’m hoping to write shorter posts and will try to get something out every week. And finally, over the next few weeks I’ll put together a glossary so that if there’s an unfamiliar architectural term in the text you can look it up right on the site. In the meantime, I'll define unusual words at the bottom of each post. And, as always, I'd love to hear from you. Questions? Comments? It's all welcome.

Now, with the housekeeping out of the way, let’s get to this week’s subject: fortified mills!

Until last spring I had never heard of a “fortified” mill, but once I discovered them I became obsessed with photographing as many as I could find. Luckily, there are a lot of fortified mills in the Entre-Deux-Mers, a region east of Bordeaux that’s best known for its white wines. So last summer Bruce and I spent a couple of days on a real scavenger hunt, searching for the vestiges of these mills – no easy task since I didn’t have any specifics about their locations. Armed with not much more than the names of the nearby villages, we drove countless tiny back roads looking for something that might be, or might once have been, a mill.

One of the reasons I find this subject so interesting is the contrast between those two words ‘mill’ and ‘fortified’.  When I think of ‘mills’ images of Holland spring to mind, with the lazily spinning sails of windmills and rotund, rosy-cheeked millers. (For a description of a French mill that fits that description take a look at my blog post from last year on the mill of the Grand Puy.) But ‘fortified mills’ conjures up a different image altogether.

And it’s true that the mills of Entre-Deux-Mers didn’t resemble those tranquil Dutch windmills at all. First, they must have been loud. All of the fortified mills that I've seen were water-powered and so they required a fast-flowing, noisy millrace to turn the enormous wheel. And secondly, because they had to be impregnable they look more like small castles, complete with defensive architectural elements like arrow slits and machicolations*.

But why on earth would you need to fortify a mill? During the Middle Ages, when these mills were constructed, life was notoriously difficult; plague, famine and war were all routine.  However, I think it’s pretty safe to say that the years from the 12th to the 15th century were especially difficult for the area around Bordeaux. Aquitaine was an independent duchy until 1152 when the famous Eleanor married Henry Plantagenet, Duke of Angers.  Two years later he was crowned King Henry II of England. Eleanor’s territory became English and for the next three hundred years this region was a permanent battlefield. Aquitaine changed hands between France and England countless times, and each change brought unimaginable losses of life and property. Because bread was such a necessity, it’s no surprise then that these flour mills were fortified.

The first mill that we found, le Moulin Neuf or New Mill, was a real disappointment. If I hadn’t known its function, I would never have figured it for a mill. The building, now a private home complete with satellite dish, abuts the road and the only evidence of water is a small bog across the street. Seriously neglected and so overgrown with shrubs that it was nearly impossible to photograph, the poor building is in desperate need of repair.

When the New Mill was constructed at the beginning of the fourteenth century it was part of the powerful Benedictine Abbey of La Sauve-Majeure, located about five miles to the southwest. Thick stone walls provided ample protection for the miller and his assistants. Arrow slits (two of which remain in the west wall) and machicolations in the balconies are further evidence of the defensive nature of the building. On the north side were two latrines on bracketed consoles, one serving the ground floor, the other the first level.

From the image below, drawn by Leo Druyn in 1861, it's much easier to understand the original arrangement of the mill and it's relationship to the stream, just visible at the bottom of the engraving. At that time the road didn't exist and the ground level around the building was much lower. Five centuries earlier, when the mill was first constructed, the ground was no doubt even lower,  and the machicolations much more useful. 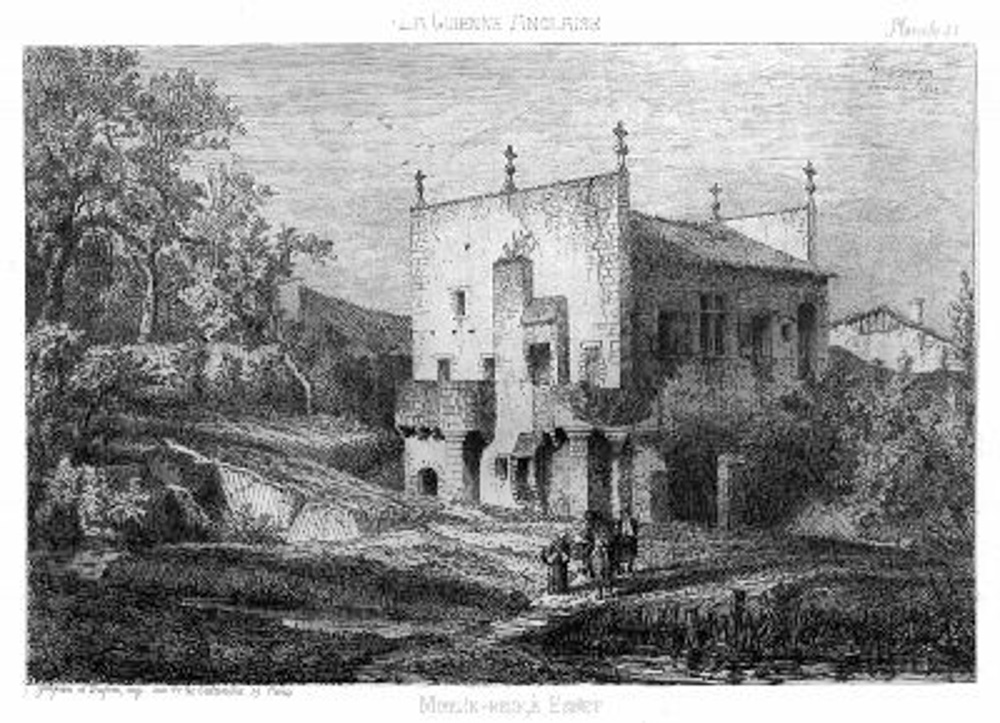 Like many of the local mills, the New Mill was originally constructed with a hipped roof that was supported on a central pillar. At the end of the Hundred Years War, in the late 15th century, the entire building was heavily remodeled. At that time the roof was rebuilt in its current gabled configuration and the two (rather odd) gable walls were erected. These walls are still topped by the original cross ante fixes, which symbolize the mill's relationship with the Abbey of La Sauve-Majeure. And although it's hard to believe, given its current sad condition, the New Mill continued to grind meal until shortly before WWII. 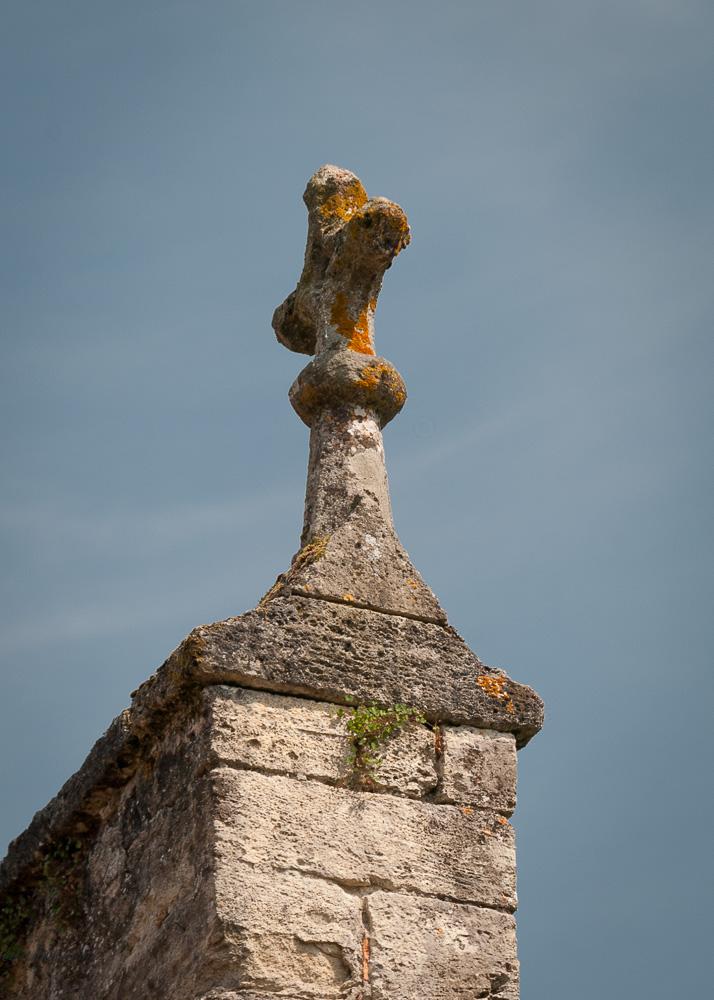 And there you have it: fortified mills. Who knew? Please stay tuned for the next two posts which will continue this theme.

Below is a map of the sites that I'll be blogging about.

* A Machiciolation is an opening in the floor of a balcony or projecting wall section that allowed defenders to drop stones, burning coals, etc. on the heads of their attackers. (But not hot oil as is customarily thought, because it was too expensive for use in this way.)

Finally, for a very readable history of Eleanor of Aquitaine check out Alison Weir's Eleanor of Aquitaine: By the Wrath of God, Queen of England. Although the book gets a little slow in the middle (during the 18 or so years that Henry had her imprisoned) it clearly explains how the histories of England and France came to be so intertwined and offers a portrait of a remarkable woman.
Posted by Unknown at 3:21 PM