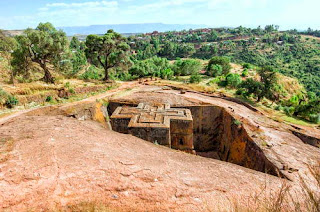 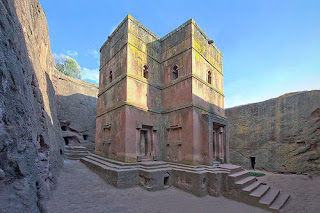 In Ethiopia there are eleven monolithic churches that I hope to see someday. Carved right out of the earth in the 13th century, they’re unique in the world. To create these spectacular structures the builders first removed enough rock to expose an enormous solid cube. Then the interior of that block was carved away to create a sanctuary that was truly monolithic or ‘one rock,’ like those in the images above.

But if you know Bruce you can imagine his thoughts on visiting a country known primarily for Haile Selassie and famine. Since my chances of getting to Ethiopia are pretty slim, it's lucky for me that the two largest monolithic churches in Europe are located within 60 miles of Bordeaux. 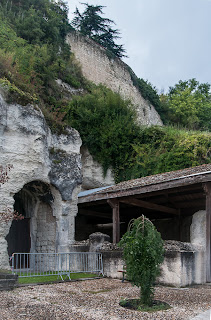 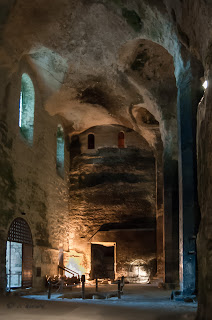 The first church is in Saint Emilion, a lovely little town that hasn’t changed much in five or six centuries.  The second is the church of Saint Jean (shown in the images at the top of this post) located in Aubeterre-sur-Dronne, one of the Most Beautiful Villages in France. (Les Plus Beaux Villages de France is an official designation and not simply my personal opinion.)  Although these churches are both called ‘monolithic’, this description isn’t entirely accurate. Instead, both were carved into an existing cliff and are more like enormous caves.

The two churches are located about 40 miles apart and were probably commissioned by Viscount Pierre de Castillon, a nobleman with holdings in both St. Emilion and Aubeterre-sur-Dronne. Pierre, who had fought in the first Crusade, may have been inspired by the religious architecture that he saw in Cappadocia. Having mysteriously acquired some religious relics while in the Holy Land, he ordered the construction of the two monolithic churches to house the precious items. For his pains, Pierre was excommunicated by the Catholic Church that took a dim view of private citizens reaping profits that should rightfully have been theirs.

The history of the Monolithic Church of St. Emilion began in the 8th century when a monk named Emilion, fleeing persecution in Brittany, arrived in southwest France. Living as a hermit in a cliff-side cave, Emilion’s miraculous deeds attracted notice and he gained a small following.  A religious community was soon established, from which the village grew. Exactly when the first church was constructed is unclear, but it is thought that upon his death in 767, Emilion’s followers may have enlarged his cave to create a small sanctuary. A modest church probably existed here for the next three hundred years.

The improvements that began in the 12th century continued for several hundred years, and included the addition of a 150-foot bell tower erected directly over the cavernous space. When this 3,000-ton tower threatened to collapse the entire structure, the World Monuments Fund stepped in with a plan to stabilize the church. Thanks to their efforts in the 1990s the original supports were reinforced and the monolithic church was saved.


Perhaps because of structural concerns, the church in St. Emilion can only be visited on a tour. The space is dark, the visits are strictly controlled and photography is forbidden. All of this makes it difficult to appreciate the grandeur of the interior and the enormity of the undertaking. On the other hand, a visit to the church in Aubeterre couldn’t be more different. Five euros buys you an informative audio guide and as much time as you need to visit the site. Photography is allowed, although the conditions aren’t exactly ideal for those of us who forget to carry a tripod.

The early history of the church of Saint Jean remains a mystery. Carved directly into the floor of the nave is a full-emersion baptismal font in the shape of a Greek cross that is believed to date to the 4th century. To the left of the nave is a necropolis containing dozens of tombs carved out fo the stone floor; these sarcophagi date to the Merovingian era (5th through 8th century). But the space is undoubtedly older than this. In 1961 a crypt was discovered beneath the sanctuary when a heavy truck broke through the roadbed and fell into the heretofore-unknown space. According to the village web site, this chamber predates the Christian era and was used for sacrifices and Mithraic rites until the 3rd century, after which it was used for Christian worship.

The enormous nave, 27 meters long by 16 meters (88 feet by 52 feet), has an interior ceiling height of 20 meters (over 65 feet), making it the tallest monolithic church in Europe. (St. Emilion, at 125 feet across, is the broadest monolithic church in Europe.) The domed roof is supported by three hexagonal columns, all that remain of the original fourteen. High above floor level is a gallery with arched openings that overlook the nave on three sides. This was the original means of entry into the church and it also connected the sanctuary to the castle in the village above.

In the apse is a two-story reliquary carved out of a single block of stone in Romanesque style.  Decorated with clusters of columns and arches, it was probably designed to hold the relics that Pierre had brought back from the Holy Land. However, the village website notes that when the reliquary was opened in 1848 it contained four coffins, two of which held the remains of children. 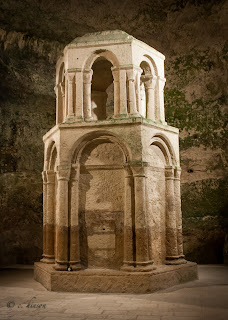 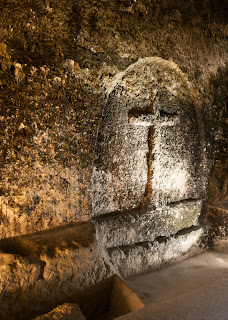 To get a better idea of how impressive this church is, please take a look at this virtual visit. For my part, I’ll guess I'll just have to be happy with the local churches until I can finagle a trip to Ethiopia.