Fortified Mills, Part 2: In which we meet a Count 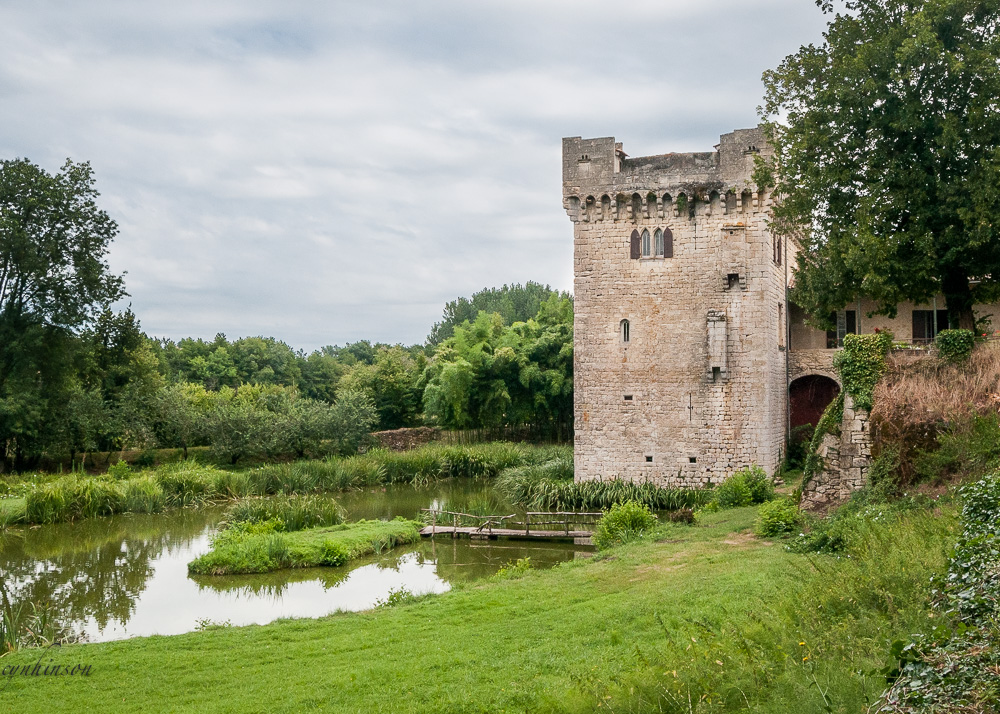 The watermill of La Salle is one of the least well-known, yet most impressive, of the fortified mills in the Entre-Deux-Mers region. But as spectacular as it is architecturally, La Salle holds a special place in my heart because of what happened when Bruce and I stumbled on it last summer.

In early August we were trying to track down some of the fortified mills that I had read about. Just outside of Cleyrac, as Bruce turned off the road onto a small dirt path we both saw the sign saying “Privé”. He, being a law-abiding citizen and former policeman, was all for turning around, but I nagged and hectored him into continuing “just a little bit further.” In this way we argued our way farther and farther from the main road; once we passed through an enormous stone gate it was clear, even to me, that we were on private property. As there was absolutely no place to turn around, we had no choice but to continue. 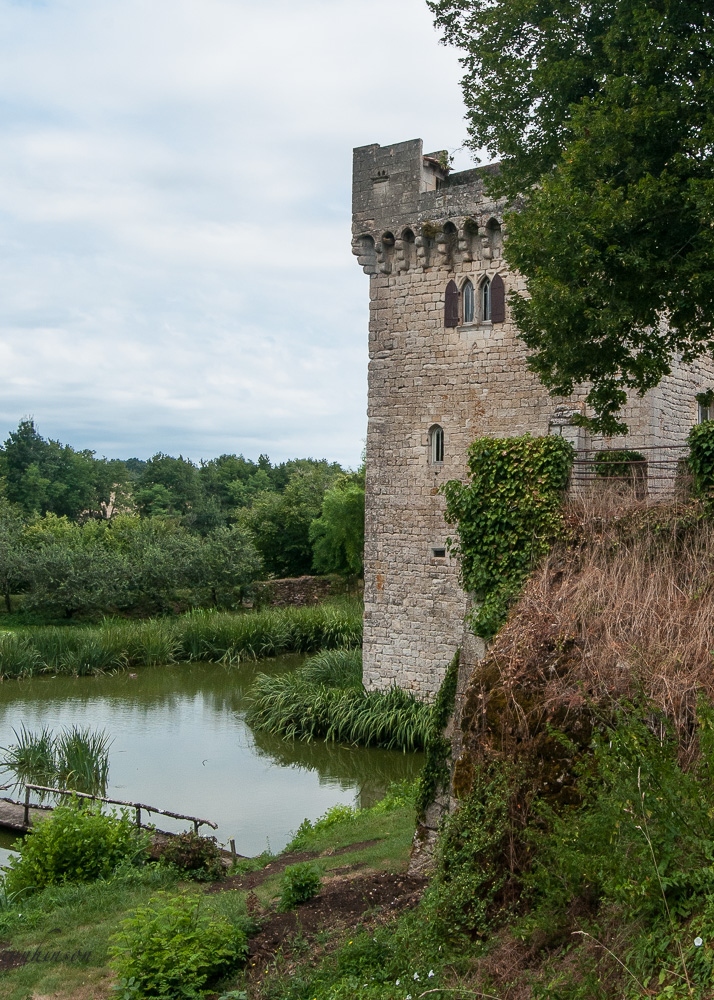 When we arrived at the forecourt an older gentleman working on a piece of farm equipment raised his head at our unexpected intrusion. Assuming he was the owner, I flew out of the car and immediately launched into an apology:  ...Americans...didn’t realize this was private property...architectural historian...looking for mills...terribly, terribly sorry...we'll turn right around and leave. But the old guy just shook his head and asked that we wait a minute as Monsieur le Comte was on his way.

Oh Mon Dieu! This had all the makings of an I Love Lucy episode and I was afraid to catch Ricky's Bruce’s eye. Thanks to my stubborn insistence we were now waiting to be interrogated by an honest-to-God nobleman. I spent the next few minutes hoping that Bruce hadn't understood what was happening, and worrying about the French penalties for trespassing.

Monsieur le Conte duly arrived, a lanky, stoop-shouldered gentleman unassumingly dressed in an old sweater and worn pants. After listening patiently to my stammered apology, he made it clear that this was, indeed, private property and, as such, not open to the public. However…in our case…he would make an exception.

This courteous old nobleman then gave us a brief history of the property, while I tried hard to listen over my still-pounding heart. The mill had been built in the late 13th century by the Knights Templar; the evidence for this can be seen in a monogram on the first floor chimney piece. The property had belonged to his late wife’s family for centuries and the residence was significantly enlarged sometime before the Revolution.

To our surprise the Count then invited us to explore the grounds on our own and excused himself to do a little shopping in town. You can imagine my delight at being left to discover a medieval mill with only a golden retriever for company. But Michael, the caretaker, who was dying of curiosity, joined us within minutes. As we strolled around he gossiped about the Count, pointed out where watercress had been grown during the Middle Ages, showed us into the lower level of the tower where the vertical mill wheel had stood, decried the poor condition of the building and gossiped about the Count a little more. 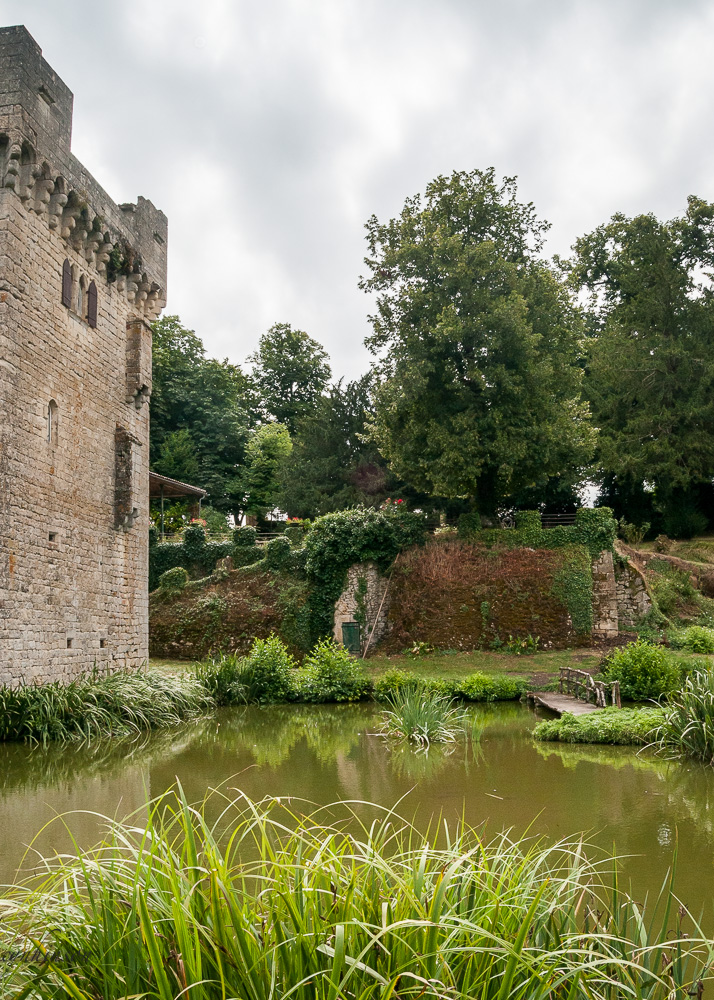 As we were making our way to the car our host was just returning and he generously invited us to view the interior. Unfortunately, I can’t provide a description of the rooms because in order to understand all that the Count was saying I had to listen very carefully to every word. And after barging our way onto his property, I thought that the least I could do was to show some politesse, so I was trying really hard not to stare. My mother will be proud to know that my good manners overcame my architectural curiosity. But later, when Bruce told me that the rooms were spectacular, I did think that a little slack-jawed curiosity might have served me better.

Ending what will probably be our first and last brush with French nobility, the Count drew us a small map of other near-by mills, recommended the books of the 19th century architectural historian Leo Drouyn, and courteously sent us on our way.


The mill at La Salle (also known as the mill at Cleyrac) is undoubtedly the largest and most imposing of all those that we found. Like the moulin de Labarthe, which I'll discuss next time, La Salle functioned both as an industrial building and a stately residence. The mill tower was originally connected to a castle that no longer exists, it having been replaced by the current residence several centuries ago.

The massive square tower has five levels and looks more like a medieval donjon* than an industrial building. Defensive arrow slits are visible throughout and the third floor is crowned with machicolations*. Crenellated battlements once topped the parapet wall and provided cover for defenders of the mill; however, due to their poor condition many of the crenellations have been removed. Although the original arch-topped casements remain at the third floor, several unsightly new windows have been installed. 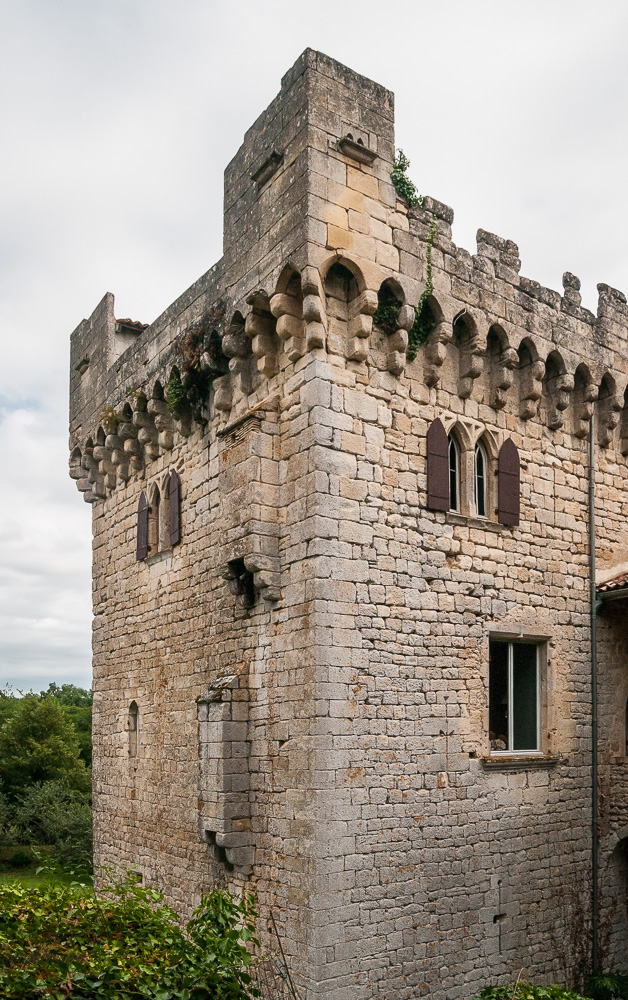 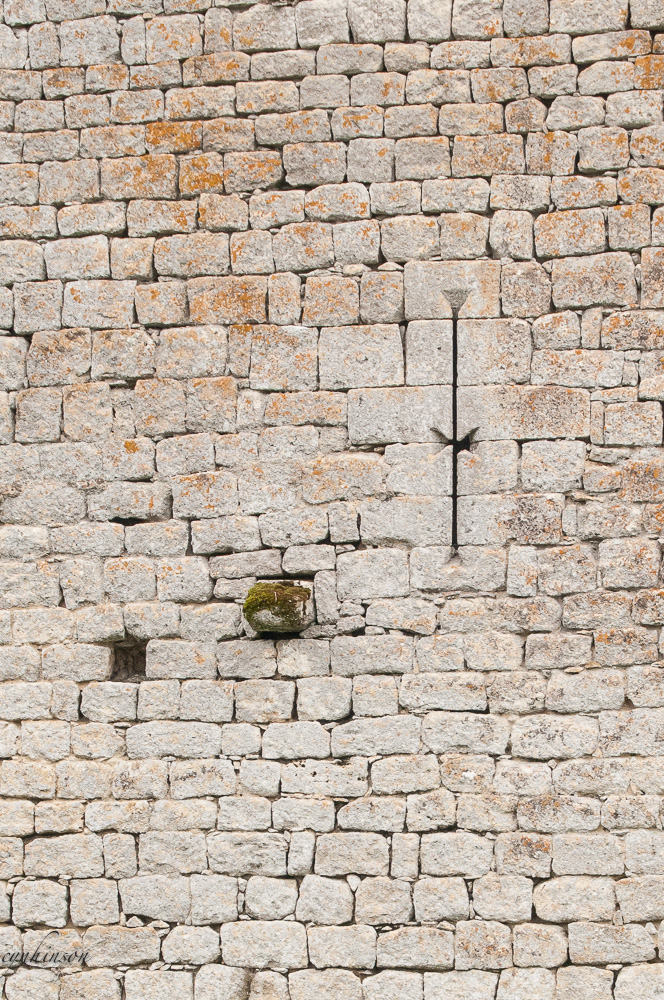 The pond that surrounds the tower on three sides appears to have been created after the mill stopped working; you can see that it doesn't exist in Drouyn's sketch from the 1860s. Now the water serves no other function than to reflect the powerful lines of this spectacular example of medieval civil and military architecture. You will find a map of the mill's general location if you click here.  LaSalle is marked by a purple star, but please don't try to repeat our escapade.

And finally, if you check the glossary page you'll see that I've actually added a few words. Please let me know if there are other architectural terms that I should add.