A couple of weeks ago I posted Part 1 of Abbey Road where I described the beginnings of Fontenay, the gorgeous Cistercian abbey located deep in rural Burgundy. For those who missed that post, I talked about how moved I was by the utter simplicity of the architecture and the beautiful contemporary landscaping that provides a perfect setting for the ancient buildings. Today I'd like to talk about the architecture in a little more detail.

Despite having been used as a paper mill for over 100 years, nearly all of Fontenay’s original buildings remain intact; only the refectory has been lost to time. The chapel and cloister, chapterhouse, scriptorum, dormitory, forge, infirmary, dovecote, visitor's chapel and abbot’s house have all been restored and most of the buildings are open to the public.


The Cistercians who founded the abbey advocated a simple life of work and prayer, and eschewed everything that was ostentatious. Saint Bernard criticized the abundant use of decoration, sculpture and gilding in religious buildings, particularly in monasteries, and wrote "The very sight of ... sumptuous and exquisite baubles is sufficient to inspire men to make offerings, though not to say their prayers."
The abbey church at Fontenay perfectly reflects his belief in austerity.

From the exterior it's difficult to distinguish the church from the surrounding buildings; it is virtually the same height as the others and is almost entirely unornamented. Because Bernard believed bell towers were ostentatious, the church lacks an identifying steeple. (The great Benedictine abbey church of Cluny III, which epitomized all that Bernard opposed, had six towers, so it’s no wonder that he saw them as a sign of excess.) Instead, a single small bell, located on the roof above the dormitory, called the monks to services.

When I say that the church is austere, I don’t mean that it’s unattractive. On the contrary, the geometric harmony of the structure and the well-thought out use of materials make for a very beautiful building. The quality of the stonework at Fontenay is particularly exceptional. Smooth pink ashlar blocks emphasize the central section of the façade, while smaller, rough-cut stones were used on either side. This detail, which is so easily overlooked, subtly emphasizes the central section of the west facade.


The façade is nearly flat, relieved only by a slightly projecting belt course and two vertical buttresses that express the tripartite division of the interior (a central nave with side aisles). The piers and the belt course create a perfect square in the center of the facade, which is marked by a round-arched door flanked by slender columns. Located high in the wall are two tiers of round-arched windows, arranged in typically Cistercian fashion. All of these architectural elements work together to concentrate the viewer's attention on the center of the building and to pull the visitor into the church. 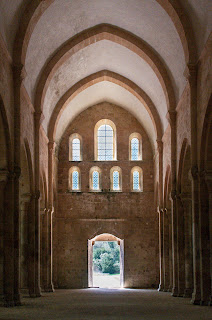 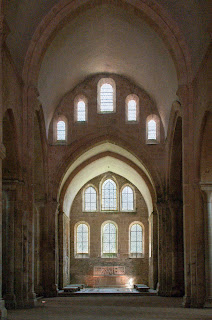 Once inside the central nave leads the viewer's eye to the chancel at the far end. A flying screen with five windows separates the chancel from the nave, and additional windows in the flat east wall shed light on the altar area.  The long barrel vault that covers the nave is separated into eight bays and supported by arches that are slightly pointed instead or semi-circular. Because of this detail the architecture of Fontenay has been viewed as a precursor to the Gothic style with its pointed arches. Engaged columns cluster around the structural piers, and the capitals are decorated with only the subtlest of carvings.

The height of the nave, the geometric proportions and the simplicity of the details work together to achieve what Peter Stafford (author of the excellent Romanesque Churches of France) has called "an austere grandeur."  The abbey church is impressive in much the same way that Gothic churches are impressive, but it is also humble in a way that only Romanesque churches can be. If this was Bernard's intention, then the architecture is entirely successful. 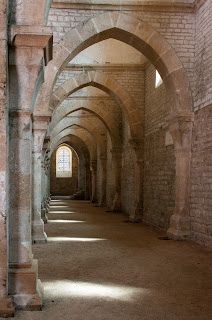 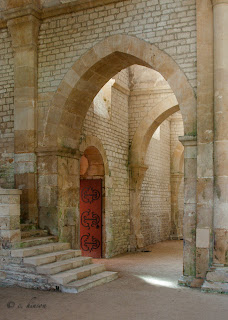 Equally interesting, but in an entirely different way, is the abbey forge. Because the Cistercians lived in isolated locations they were required to be entirely self-sufficient. As a result, the monks and lay brothers were excellent farmers and the order made great strides and improvements in the areas of farming and animal husbandry.

They were also excellent metal workers and Fontenay retains one of their earliest forges. The two-story masonry structure, which dates to the late 12th century, is one of the oldest industrial buildings in France. The center room contains an enormous fireplace for heating the metal. In the adjacent room a long wooden shaft is connected to a large mill wheel on the side of the building. The monks diverted the local stream into a mill race, the water of which turns the mill wheel. This movement causes the shaft to turn. Attached to the shaft is a lever arm that raised a heavy, iron-clad wooden hammer, which fell by gravity and pounded the wrought iron. This device, which is claimed to be the first hydraulic hammer, allowed the monks to work the iron ore that they mined nearby.


Because of their development of the hydraulic hammer and numerous other improvements that they made in the field of metallurgy, the Cistercians were directly responsible for much of the technological progress of the Middle Ages. This is probably not exactly what the monks had intended when they withdrew to this isolated site and devoted their lives to work and prayer.

For those of you who are interested in visiting this remarkable site, here's a map to help you find Fontenay Abbey.
Posted by Unknown at 5:51 PM