Roll out the barrel vaults

The lovely Burgundian town of Tournus is home to the abbey of Saint Philbert, a church that has something for everyone. Do you believe that 'older is better'? Saint Philbert’s was built in the 11th century. Love a peaceful cloister? A gloomy crypt? A breath-taking chapel? They’re all here, waiting to be explored. Looking for painted decoration, mosaic floor tiles, curiously carved column capitals, or a magnificent 18th century organ? Saint Philbert’s has them. Throw in some structural innovations that make the nave a serene and light-filled space and the result is a place where nearly anyone can happily spend an hour or two. 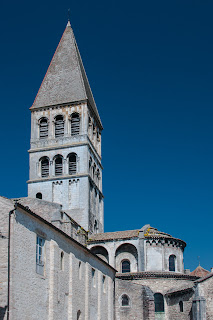 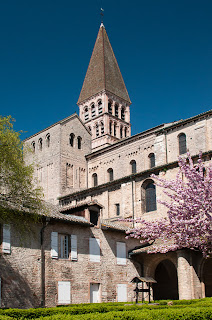 Although the origins of Saint Philbert’s are unclear, it is believed that Valerian brought Christianity to Tournus near the end of the second century.  He was beheaded there and buried on the spot where the crypt was later constructed. Following Valerian’s martyrdom, Tournus became a popular pilgrimage destination and the Benedictine monastery prospered and grew.

In the mid-9th century a second group of monks arrived in the village, carrying the relics of Saint Philbert, the founder of the prestigious abbey of Jumieges in Normandy. Displaced by Viking raids, these monks had been searching for over 40 years for a place to settle. They were finally granted the abbey and town of Tournus by Charles the Bald, despite the fact that the abbey already housed an order dedicated to Saint Valerian. Valerian’s relics were consigned to the crypt and Philbert took pride of place in the sanctuary above. Somehow, the two groups managed to coexist, although their relationship was not always cordial.

In 1006 the original abbey church was destroyed by fire. Construction of a new building was begun immediately and continued for the next century. The sequence of construction is not clear, however it is thought that the western end of the building, including the chevet, radiating chapels and transept were completed first.  They were later reworked, and therefore appear to date from a later period. Work was then begun on the narthex and nave, and the entire sanctuary was completed and consecrated in 1120.

The crypt, which is located under the choir, is believed to predate the fire of 1006, and may have been built at the end of the 10th century. This is a dark, evocative place, with three square chapels radiating off of a central apse. Slender columns, several of which date to the Roman era, support the choir above.

Public access to the main sanctuary is through the narthex, a somber space decorated with the remnants of frescoes, including a 12th century Christ in majesty.  This space, which is almost entirely devoid of light, leaves the visitor completely unprepared for the sanctuary that lies beyond. Stepping into the nave is like stepping into a warm bath of light. The entire sanctuary is built of pinkish stone that lends a rosy glow to the interior and, despite the enormous cylindrical columns, the space seems to soar in a way that anticipates the verticality of the Gothic style that would follow. Originally the interior walls and columns were covered with plaster and painted decoration. Virtually all of this material was removed in the early 20th century, exposing the pinkish stone.

Unlike many Romanesque churches, Tournus is filled with light. This is due to a structural innovation that is thought to have originated here. The naves of many Romanesque churches are covered with a barrel vault – essentially a semi-circular roof. These vaults usually run the length of the church – from the west entry to the east end. Used in this way, it is impossible to insert windows or openings in the sides as this would compromise the structural integrity of the vault.  At Tournus, however, instead of one long vault, the roof of the nave is constructed of five short barrel vaults that run in a transverse direction, from north to south. In this arrangement the ends of the vaults have no structural purpose, which means that windows could be created high in the side walls of the nave. These windows, coupled with smaller openings in the side aisles, let in more light that was usual for this period.

Located adjacent to the south side of the church are a peaceful cloister, the salle capitulaire, the refectory and a wine cellar. The only building that is missing is the monks' kitchen, which was demolished in 1656. These buildings, together with the church, comprise the only ensemble of 12th century Romanesque buildings conserved in Europe.