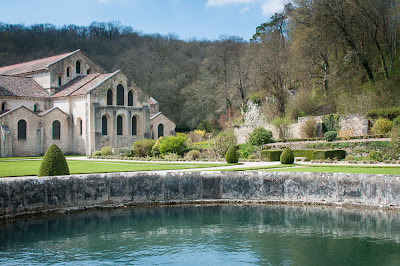 Sooner or later, nearly every traveller finds a particular place that speaks to him or her in a personal way. It can be anywhere: a country, a building, a park. My sister Gail is called by the New Mexican desert. My belle soeur Grace was smitten with Norway’s fiords.  And I found nirvana in an isolated Benedictine abbey in Burgundy.

I've always been drawn to churches, particularly those from the Romanesque and Gothic periods. The combination of structural engineering and artistic expression simply never ceases to astound me. And then there's the ever-varying quality of the light. And the remnants of 11th century painted decoration. And of course I'm always trying to puzzle out exactly how these buildings appeared to the average person during the Middle Ages, what exactly it was that they saw and experienced.

Until Fontenay, my attachment to these churches was largely intellectual. But in that remote corner of Burgundy, the peaceful setting and utter simplicity of the abbey spoke to me in a way very few buildings ever have. In contrast to the splendid grand cathedrals that keep me at arms' length emotionally, Fontenay was appealing because of its austerity. 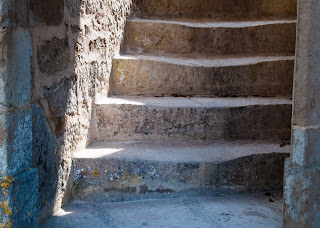 In order to understand the architecture of Fontenay it’s necessary to know a little about the history of the monastic orders during the Middle Ages. The most powerful of these orders were the French Benedictines of Cluny, established  in 910 by William the Pious, Duke of Aquitaine.  Because it was independent of both local secular and Church authority, the Abbey of Cluny grew into one of the most powerful European institutions of the Middle Ages. Her abbots became international statesmen and Cluny was at the center of a network of over 1,450 abbeys that stretched from France into England, Germany and  Spain.

As Cluny’s influence increased, all of the affiliated Benedictine abbeys grew extremely wealthy. Their buildings became larger and more ostentatious, filled with decorative paintings, ornate carvings and jeweled relics. In time, other orders such as the Carthusians, began to preach against the corruption that they believed to be destroying the Benedictine order.

However, the most outspoken critics of Cluny came from within the Benedictine order itself. Called  Cistercians for their abbey at Citeaux, this group of dissident monks was founded by Robert of Molesme in 1098. They believed in a return to the teachings of St. Benedict, who had advocated a life of poverty and piety, centered on hard work and prayer.

The most radical and best known of the Cistercians was Bernard, who became abbot of Clairvaux at the age of thirty. An ardent opponent of Cluniac excess, Bernard believed that all ornament was 'worldly' and served only to distract the faithful from worship. He was particularly opposed to the ghoulish and grotesque sculpture that adorned so many Romanesque churches.

Because of Bernard's influence, Clairvaux's population soon outgrew the abbey. Fontenay was founded in about 1118, with Bernard's brother elected as the first abbot.  Because the Cistercians devoted their lives to poverty and manual labor, they always chose remote settings close to a water source when establishing their monasteries. And because they weren't interested in architectural innovation or elaboration, they drew up basic plans for their abbey buildings; these could be adapted as necessary according to the constraints of each site. Despite the fact that the Cistercians did away with virtually all ornament, the well-balanced proportions create an austere beauty in the spaces. 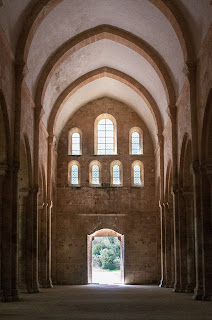 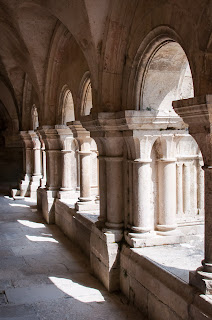 By 1130 Fontenay was well established, housing about 300 monks. The complex, which has one of the oldest and most complete assemblages of Cistercian buildings remaining in Europe, includes the original church, cloister, scriptorium, dormitory, warming room, dovecote and forge. An infirmary and abbot's house were added later.

After the Revolution, Fontenay was sold to the Montgolfier family (inventors of the hot air balloon) and was used as a paper mill for over a century. In 1906 the wealthy Lyonnais banker Edouard Aynard purchased the property, demolished the factory, and began an extensive restoration that resulted in the abbey’s listing as a UNESCO World Heritage site in 1981.

The grounds were recently redesigned by the landscape architect Peter Holmes. Although in stark contrast to the historic buildings, the new fountains, plantings and walkways only add to the serenity of the site. If you’re in the area on a sunny day, I highly recommend that you take a couple of hours and linger in the shadow of these magnificent old buildings.  I'll tell you more about them in Part 2 of "Abbey Road". 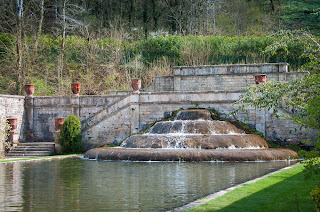 For those who are interested in visiting here's a map that will help you find  Fontenay Abbey.