In my last post I raved so much about Gaudi’s exuberant architecture that it seems only fair to give the Old City it’s due this week. I was really surprised by the older quarters of the city (Ciutat Vella in Catalan) primarily because I hadn’t expected so much to remain. What I hadn't realized was that the entire city of Barcelona had been confined within high stone walls until 1859. This undoubtedly accounts for the cohesiveness of the Old City where there are blocks and blocks of narrow, twisty streets lined with three and four story, balconied buildings. Some have lavishly painted facades, others are decorated with Gothic details, and all are nearly impossible to photograph. This contrast between the old quarter and the (relatively) new areas makes Barcelona a fascinating study in architectural styles. 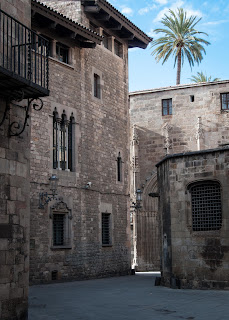 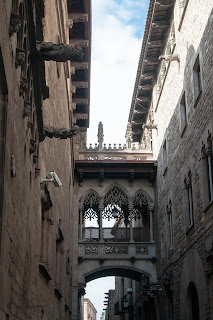 The Ciutat Vella began at the port, and expanded north from the water until it reached the Placa de Catalunya, the grand square that was once the furthest edge of the old walled city. Placa Catalunya is now the pivot point around which the entire city rotates; it’s here that the historic area ends and the Eixample begins.


The Old City is made up of three different neighborhoods, the Barri Gotic (Gothic Quarter), La Ribera to the east and El Raval to the west. Each has it’s own distinct style and contains an infinite number of architectural treasures, ranging from Roman ruins to medieval churches and palaces, and Renaissance government buildings.

What is now the Placa de Sant Jaume in the Gothic Quarter was originally the center of the Roman city of Barcino. This Placa is home to two of the city’s most important government buildings, the Renaissance Palau de la Generalitat (the seat of the Catalan government) and the Gothic Ajuntament (or City Hall). Around the corner is Barcelona's Cathedrale de la Santa Creu i Santa Eulalia which despite a 19th-century façade, was begun in 1298. 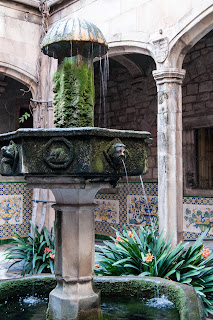 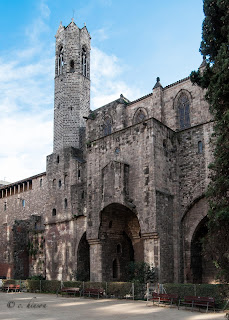 The Gothic Quarter, particularly those streets nearest the port, is also where Picasso spent his teen years. The Picasso Museum, located nearby in the La Ribera section, documents his meteoric rise. The works are housed in five Gothic palaces that can be explored along with his art.

La Ribera also contains the Church of Santa Maria del Mar. Consecrated in 1384, this gem of the Catalan Gothic style owes its unusually cohesive appearance to the fact that it was constructed in a mere 55 years, an unprecedented feat for a Gothic cathedral. 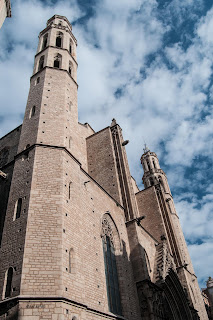 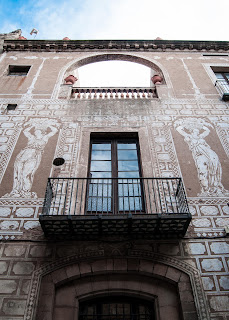 Separated from the Gothic Quarter by the broad avenue La Rambla (notorious haunt of pickpockets and thieves) is El Raval. Known since the early 20th century as 'Chinatown', a slang term for red light district, this area was notorious for crime and prostitution, but is gradually becoming gentrified. The lively Mercat de la Boqueria is located here. Originally a meat market (boqueria means ‘butcher’ in Catalan), fruit and vegetable stalls were finally allowed to open in 1861. Now almost anything edible can be found in this enormous building, constructed in 1914. 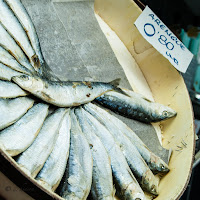 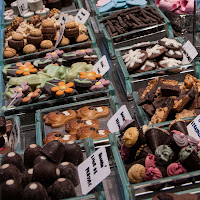 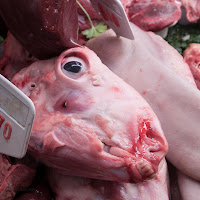 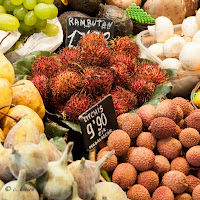 While these areas certainly aren’t as exuberant as the newer districts, nonetheless they’re a constant surprise. You turn a corner only to find an arcaded building right out of the middle ages. You turn the next corner to find yourself in a small square centered on a Gothic church. It’s all really well preserved but doesn’t have that awful Disneyesque feeling that you get in some heavily visited historic areas. Locals still live and shop here, there’s a lot of graffiti and certain sections feel a little edgy. I only hope that as real estate prices rise, these areas won’t lose their grit, their vitality or their veracity. 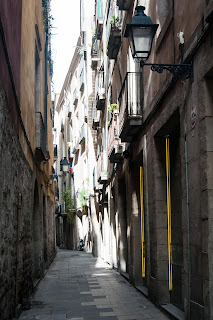 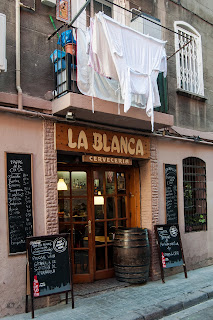