No matter what you call them, these now-quaint architectural elements were once a necessary part of daily life. On our first visit here, it wasn’t long before I noticed that there was a boot scraper beside the front door of every house and most public buildings. Even the churches have them. So for two weeks I  crouched on the sidewalk, looking like a fool, and photographed dozens of these overlooked ornaments, while Bruce gazed at the sky and acted like we weren’t actually together. Since we've moved here, there's not a week that goes by that I don't find another beauty to add to my collection.

I find them fascinating, in part because the variety of shapes and styles seem nearly endless. But more importantly, the widespread use of these little wrought iron do-hickeys says so much about living conditions when streets were unpaved, sidewalks didn’t exist, and horses were the primary means of transportation. In 1866 a journalist for La Petit Gironde wrote that, when it rained, the hard-packed dirt streets of Bordeaux instantly turned into rivers of mud. Many roads become completely impassable and others were transformed into cesspools of household waste.

This must have been the case, not only in Bordeaux, but in every European city. So I wonder why there are so many boot scrapers here, and so few in other places?  Were they used more often in Bordeaux, which has always been a rather posh city? Or have they simply been removed in other locations?  There’s an old joke about certain households in Marseilles that had boot scrapers inside, so that folks could clean their shoes before they left the house. Maybe that explains why there seem to be  fewer in other places…they just aren't visible!

Regardless, in the days when any street could suddenly become a quagmire, the necessity for a boot scraper was obvious. Now they come in pretty handy when, no matter how carefully you’ve navigated the sidewalk, you find that you’ve walked through one of the ever-present piles of merde de chien.

These architectural gems were usually installed singly, but from time to time I see them in matched pairs, usually flanking a beautiful front door in an upper crust part of town. So far I’ve found three major types of scrapers, the most common of which projects out from the facade of the building. These are usually semi-circular, although they can be rectangular, fully circular, diamond-shaped or smashed beyond recognition. (It’s one of the small tragedies of an architectural historian’s life that things like boot scrapers aren’t appreciated anymore.) 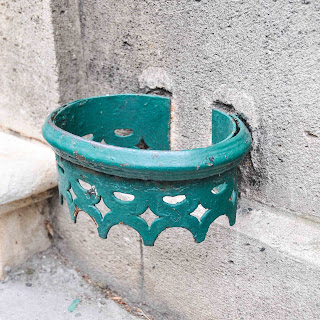 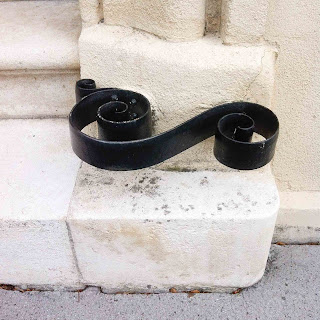 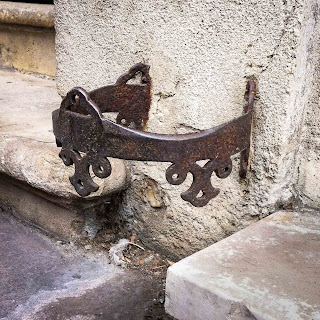 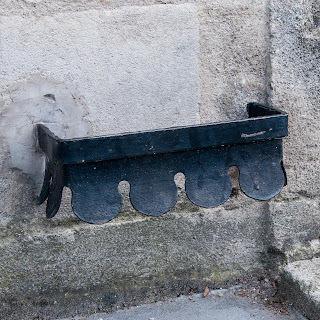 The second style is mounted flush with the building face and the stone behind it is hollowed out to allow room for a loafer, sandal or tennis shoe. (I can tell you from experience that nothing but a scrub brush and water will clean a hiking boot!) These are usually in the form of heavy iron bars but they can also be highly decorative. 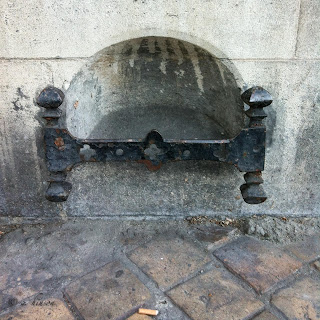 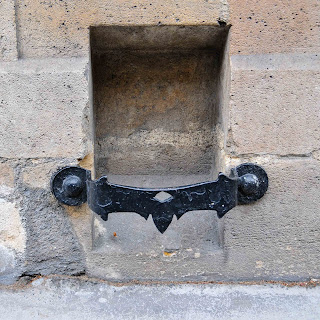 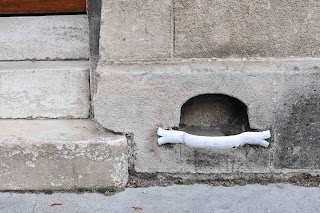 From time to time you see a scraper located perpendicular to the face of the building. Sometimes they’re attached to the stone, but one of the prettiest in Bordeaux isn’t on the building at all; instead it’s located on the sidewalk adjacent to the front door.


Stylistically they range from utilitarian semicircles to elaborate crowns, scrolls and lyres, but there is seldom a connection between the architectural style of the boot scraper and the building itself.  However, one of the loveliest that I’ve seen so far is a lyrical curve of wrought iron in the same Art Deco style as the house it serves.


The condition of the scrapers varies widely. They don’t seem to be appreciated, and more often than not they’re neglected or downright abused. They make convenient places to secure a bike or motorcycle, and many are damaged or removed completely when new utility panels are installed. 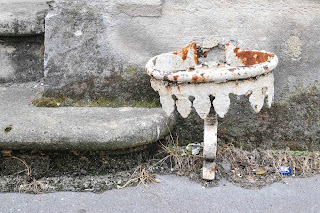 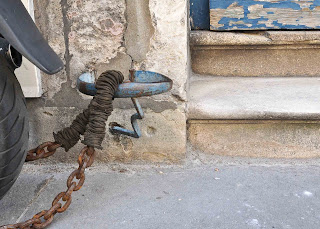 But occasionally, usually on a recently restored building, the scraper is freshly painted or polished with the same care as the finest brass door hardware. 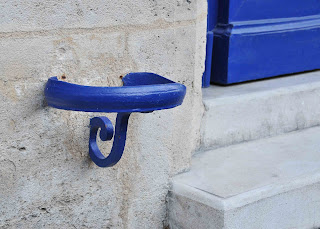