It's rained every day since early December and Bruce and I were both fed up. So I booked a cheap flight to Barcelona, hoping for a week of sunshine. Which we got…along with some good food, a local festival, a couple of parades and lots of crazy architecture by Antoni Gaudi.

Now for those who don’t know, Gaudi is the patron saint of Barcelona architecture.  He began his career designing mansions for the captains of industry. But by the time he died in 1926, (hit by a tram, he was so dirty and shabbily dressed that they didn’t recognize him at the local hospital and refused to treat him.) he had become so pious that he’s actually being considered for real sainthood.  But I didn’t have the courage to warn Bruce about Gaudi, because I knew he’d hate the man’s architecture, and I really wanted to get out of the rain.

To be fair, Gaudi isn’t for the faint hearted. When he finished architecture school, the dean noted wryly that they had just graduated either a madman or a genius. Everything about his work, and that of his Moderniste contemporaries, is OVER THE TOP. Walls are curved; columns are contorted; ceilings ripple and swirl; simple exhaust vents look like exotic warriors. To top it off, every surface is covered with ceramic tile and dripping with ornament. 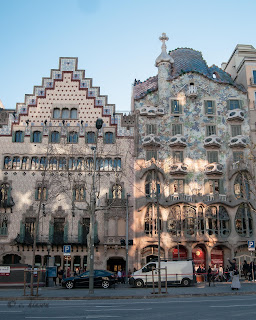 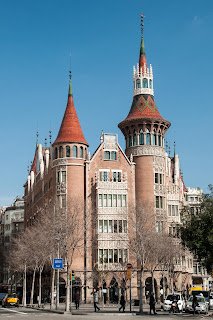 Before I go any further I have to admit that we missed Gaudi's major work – Sagrada Familia. Don’t ask.  (For those of you who know Bruce, he wasn’t kidding when he said “I love you honey, but I’m not going in another church.) Anyway, I’m sure we’ll be going back to Barcelona, despite having our money and cell phone stolen by two helpful gypsies. (For the details on that fiasco see Bruce’s blog.) Then I’ll go to the Basilica alone and spend the day gawping at Gaudi.

But even though we by-passed Spain’s biggest tourist attraction, Moderniste architecture is everywhere in Barcelona. We started out at the Palau de la Musica Catalana designed by Gaudi’s contemporary, Lluis Domènich in 1908. It’s so heavily ornamented that after construction was completed the owners decided to remove some of the convoluted plasterwork and drippy light fixtures. Performers today all talk about how distracting the building is while they’re trying to rehearse. 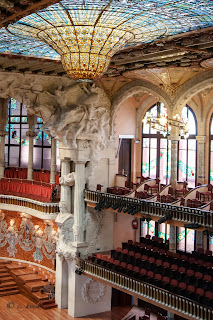 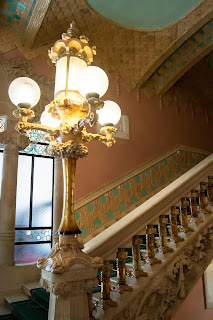 One concert hall and Bruce was through with architecture for the day. So I went alone to see Casa Milà, which many architects believe to be Gaudi’s masterpiece. His last civic project, this enormous apartment building is known as “La Pedrera” or “the stone quarry” due to the rocky appearance of the undulating façade. In order to accomplish his sophisticated design, which banished all straight lines, Gaudi did away with load-bearing walls and relied on a steel structural system. The convoluted form meant that no two apartments had the same floor plan and there were no rectangular rooms. In order to provide light and ventilation he wrapped the apartments around two interior courtyards, with the result that each unit had a set of both ‘summer’ and ‘winter’ rooms, depending on their proximity to the light wells. The basement housed the first-ever residential parking garage, and Gaudi himself designed every detail including the doorknobs and hinges.  Yes, it’s a lot to take in, and it mystifies those who worship at the altar of rational Bauhaus-based architecture. But it appeals to the emotion and was the perfect architectural style for the new Barcelona. 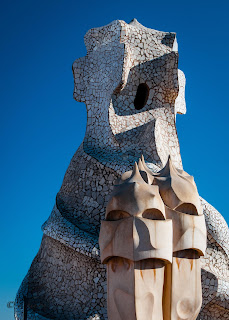 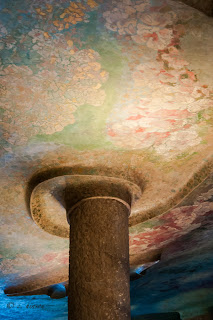 Visiting now, it’s hard to believe that until the 1850s Barcelona was an unsanitary town of dark narrow streets and stone buildings, entirely enclosed by walls, portions of which dated to the Roman era.  As early as 1821 a French visitor noted that “The people do not fit in Barcelona” and the populace repeatedly petitioned Madrid for permission to demolish the constricting walls.  But it wasn’t until 1854, when the citizens began to destroy the walls themselves, that a tangible solution was first discussed.

Once the walls were demolished in the late 1850s, L’Eixample (Catalan for “the extension”) grew at an unprecedented rate. And as the city grew, the populace discovered a newfound pride in all things Catalan. Books were once again published in the Catalan language, music was sung in Catalan, and the Moderniste architectural style was chosen to represent the dynamism and vigor of the new city. For Barcelona’s architects, many of whom were also pro-Catalan politicians, Modernisme was viewed as a national style. Architect/politician Josef Puig i Cadafalch wrote “The most important thing that we have done is that we have made a modern art, taking our traditional arts as a basis, adorning it with new material, solving contemporary problems with a national spirit.”

Up and down the wide new boulevards commercial buildings and apartment blocks were constructed in this Catalan version of the Art Nouveau style. Some of the buildings are more eccentric than others, but each has an individuality and exuberance that is truly astonishing to 21st century eyes. 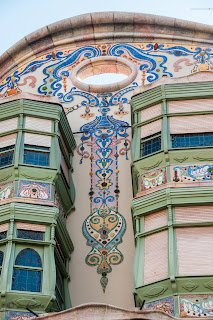 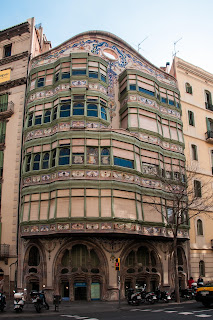 A week just isn’t enough time to explore the richness and variety of Barcelona’s architecture and I can hardly wait to go back.  But I think I’ll leave Bruce in France this time. Anyone want to go with me?

I'm currently reading Colm Toibin's book Homage to Barcelona and can recommend it to anyone, especially if you're planning to visit.
Posted by Unknown at 2:05 PM