Before I start talking about my real subject (which will be the interesting architectural gems in and around Bordeaux and throughout France in general) I’d better talk a little bit about myself.  My name is Cynthia Hinson, I’m a graduate of Columbia University’s historic preservation program, and my husband and I recently moved from St. Petersburg, Florida to Bordeaux, France. I’ve worked as an  architectural historian for nearly twenty years (YIKES!), so for me this move was a once-in-a-lifetime chance to explore France’s architectural treasures at leisure. Because I don't have to leave after my too-short vacation is over, I can really study all of my favorite buildings.... day after day.... season after season....come rain (lots of it) or come shine. I can really get to know them, and appreciate them like old friends. And then I can share them with you.

But what's with the name of the blog?

archi-trouve*
is a made-up word that combines the first syllable of  architecture
with
the French verb trouver, which means “to find.”

It's also a play on the very real term architrave. In classical architecture this is the horizontal beam that spans across the top of columns, the element that you see below in red. 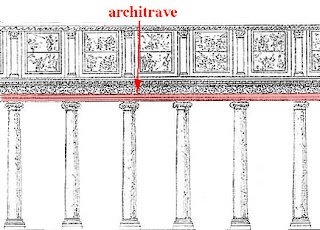 So, this blog will be all about finding architecture-related subjects to share with you, week after week. This shouldn’t be too hard because here, every city, town and village has a rich supply of historic buildings.  I'll never lack for subjects, including churches, houses, shops, mills, fortresses, chateaux, bridges and market places. And searching for a new topic will make me get out of our apartment even when it’s cold and gray and rainy, and I don’t want to do anything except read cooking blogs and experiment with new cake recipes.

To begin I’d like to introduce you to our new hometown, Bordeaux, a beautiful city of about 250,000 inhabitants (city center only) located on the Garonne River in southwest France. As most of you probably know, Bordeaux owes its wealth and prominence to the wine trade that was started by the Romans sometime around the 3rd century and continues unabated today. 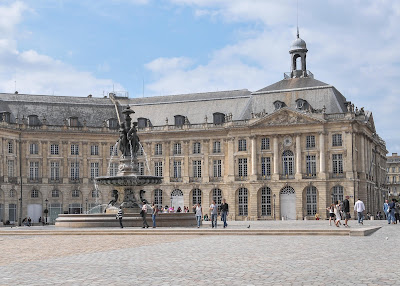 Bordeaux has been called the least French of France’s cities, probably owing to the fact that it was part of England for 300 years or so, from the 12th to the 15th centuries.  Everyone who saw the movie A Lion in Winter a million years ago will remember that Eleanor of Aquitaine's property, of which Bordeaux was the capital, was ceded to England when she married Henri Plantagenet, the future King Henry II. After Bordeaux returned to French control, the wine trade with England continued to influence the development of the city, which may account for some of its un-frenchness.

Victor Hugo believed that Bordeaux was the most beautiful city in France. Her rich architectural tapestry includes everything from Roman ruins to early Romanesque churches, Gothic cathedrals, Classical commercial buildings, Gustave Eiffel’s first bridge, Art Deco houses, a World War II era submarine base and a handful of modern buildings. It is home to 362 individual historic monuments, more than any other French city except Paris. 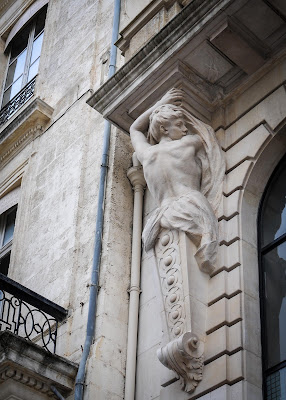 But it's not the hundreds of individual buildings that make Bordeaux so beautiful. Instead it's the city as a whole that is so memorable. UNESCO listed Bordeaux as a World Heritage site in 2007  citing it as an outstanding example of innovative classical and neoclassical trends, with "an exceptional urban and architectural unity and coherence." Today, over 5,000 18th-century buildings in the city center contribute to that strong sense of architectural unity.

Despite this architectural treasure trove, Bordeaux had been nicknamed “the Sleeping Beauty” because for years the city was covered in a thick layer of black soot that effectively hid her beauty. However, thanks to the recent efforts of Mayor Alain Juppé, the city has awakened and is becoming more beautiful everyday.

Scaffolding is going up everywhere and in the few short months that we’ve been here several buildings have lost the black crust that once concealed spectacular details.

I have to say though, that the French don’t do modern architecture very well (and by that I mean everything from about 1920 on. And yes, that includes Le Corbusier. I freely admit my prejudices and you should quit reading right here if you think he was a genius because we probably won’t see eye to eye on architectural issues.)

Bordeaux, like most French cities, is home to several 20th century eyesores.  The most egregious example is the Tribunal de Grand Instance, designed by English architect Richard Rogers (again, the English influence) in 1998, which isn't even remotely sensitive to the surrounding architectural fabric. We had to visit this place last week in order to get a list of state-certified translators for our drivers' licenses. The concrete is dirty, the stairs are broken and cobbled together with strips of metal, and I never did figure out what's up with those wooden tank-like rooms. Someone mentioned that they were intended to look like wine casks.  (Sorry. For a minute there I thought I was my husband....) 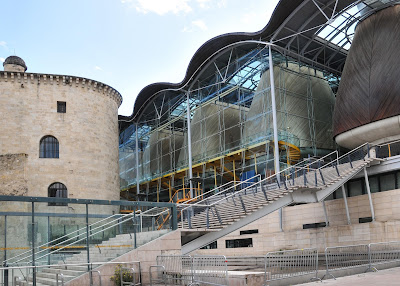 However, a few poorly-designed modern intrusions can't spoil Bordeaux’s rich legacy. There’s a lot to explore here and in the surrounding area, so check back periodically for more!