Colombage, also known as half-timbering or pans de bois in French,  is a construction style using strong timber foundations and supports, infilled with plaster or masonry such as brick.

We just got back from Rouen -  one of my favorite places in France. I probably love it because it retains so much of its medieval architecture. Rouen has a significant Gothic church in every second block and narrow, winding streets lined with dozens of buildings that date to the 15th and 16th centuries.  Joan of Arc was burned at the stake in Rouen and when you walk those streets it's not too hard to imagine life in 1459.

When I think of half-timbered construction I automatically think of Tudor England in about the 15th century. But this building technique, where the structural members are of wood infilled with masonry, was used by the Romans and can be found in various incarnations throughout the world. Probably the highest concentration of French half-timbered buildings remains in Normandy, the region northwest of Paris, of which Rouen is the capital.


In the Middle Ages, when construction first began in this style, the timbers used for framing were extremely long,  thus the early style is called bois longs (long wood). But by the early 13th century, as trees became less plentiful and narrow village streets made it difficult to transport long timbers, the size of the wood members decreased. A new style known as bois courts (short wood) arose.


Short wood construction allowed for some significant architectural improvements. Medieval carpenters began to build corbeled facades, in which each floor overhung the one below. This gave each house more space on the upper floors (a real bonus since the homeowner was taxed on the square footage of the ground floor), and in Rouen, where it rains without stopping, the overhangs kept the walls and sidewalks below dry. But as the buildings became wider, the streets became narrower and increasingly dark. Fire was also a constant hazard. For these reasons and because they hoped to improve air quality and fight the plague, the Rouen town fathers outlawed corbeled facades in 1520.

Colombage construction was not limited to use in villages and towns. It lent itself just as well to small country houses, public buildings and churches. In many cases the exposed structural members were painted in bright colors or covered in small pieces of slate, both of which helped preserve the wood.


Of all the things I love about these buildings, it's the decorative details that I enjoy the most. Each hand-carved element tells a story about the owners, builders, political leaders, church elders, belief systems and thought processes of the time.  We in the 21st century may not understand all of the implications, but nonetheless, they speak to us. The carvings may be cheerful or frightening, but they're always thought-provoking.

Below is my favorite house in Rouen - a handsome four-story example of colombage with beautifully patterned brick infill. It looks formal and imposing. That is, until you study the details, and then you don't know what to think about it. In the lower right hand corner is a creature with a human body, a lion's (?) tail and furry paws, holding a human mask. Tucked into the corbel behind him is a small figure with an exquisitely carved face who looks like he's about to wet his tights.  "Supporting" the corbeled second floor are four figures, one of which is a man with his back partially turned to us. Dressed in a simple tunic he looks like a common laborer. But maybe he's a thief with that rather skulking body language.  In any case he's not the social equal of the woman to his right who is dressed in the height of fashion, holding what looks to be a Bible. Yet she's got her skirts hiked up and is showing not only her shoes, but a good deal of leg also - pretty risqué for the time! Between the two, carved into the frieze, is a human face that appears to be keeping a sharp eye on that male figure. 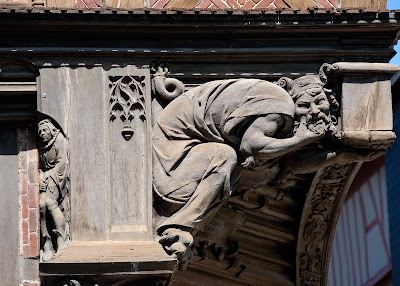 And just because I'm on a roll and have already uploaded the photos - take a look at these details from another building in Rouen.  First up is the mason, who looks like a very tired Elmer Fudd. This poor man's practically working in his sleep. Just look at those bags under his eyes. 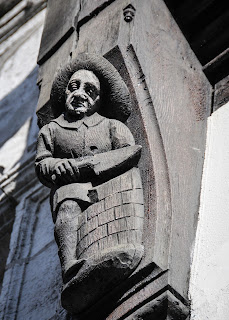 And here's the local bishop (you can tell from his headgear). I think he looks sort of sanctimonious. And isn't he overstepping his bounds a little by having himself portrayed as a dragon slayer, à la Saint Michael? 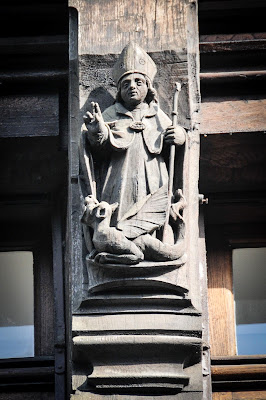 And finally there's the architect, looking slightly smug with his floor plans and model in hand. Or maybe he's just trying to figure out how he's going to get paid for all his hard work. 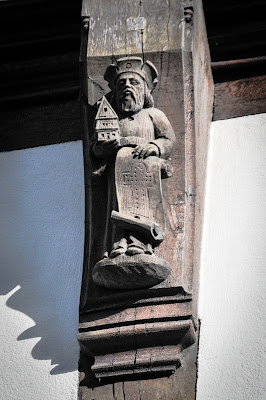 I'm sure you understand that these are all just my personal impressions. But that's what makes these buildings so wonderful - they demand that you exercise your powers of observation and interact with them on a very personal, emotional level.  And to me, that's what architecture should be all about.