One of the best things about Bordeaux? I have my very own Roman ruin. Well no, it’s not really mine; the city hasn't awarded it to me for having the best new Bordeaux blog (though I'm sure their recognition will come in time). But it sure seems like mine alone.  It's only a five-minute walk from our apartment, so I can drop by anytime. And because it’s tucked into a residential area no one’s ever around when I visit, except for maybe two old gals, sunning themselves and catching up on the gossip.   There's not much left to look at, just a few crumbling masonry arcades and what was obviously a grand entrance.  And even though it's called Palais Gallien it was never a palace and had no connection with anyone named Gallien.

In the 2nd century Burdigala (as Bordeaux was then called) was the capital of the Aquitaine region. Because of the local wine trade Burdigala was one of the richest cities in Roman Gaul, embellished with bathes, temples, aqueducts and porticoes that “emerged from the swamps like islands in the sea.” Located in the farthest corner of the city was the enormous amphitheater that would later come to be known as "Palais Gallien."


Located on a low hill northeast of the city center, the amphitheater was capable of seating 22,000 spectators.  Unfortunately, so little of the original structure remains that it’s difficult to accurately reconstruct its appearance. It is certain, however, that the original building was a huge ellipse, 450 feet on its long axis and 365 feet wide. The structure was formed of six concentric masonry rings, and the exterior walls were 70 feet high and five feet thick. The perimeter wall was formed of 28 to 30 arcades with monumental entryways at each end of the long axis. (In comparison, the Roman Coliseum, which was over twice as large, was formed of 80 arcades and held 55,000 spectators.)

The walls were constructed in a pattern that alternated seven rows of small limestone blocks with three courses of narrow Roman brick, an arrangement that gave symmetry and and a sense of scale to the enormous building. This masonry technique appears to have been almost unique in France; only the amphitheater of Frejus, near Nice, used this same pattern.

Spectators were seated on three tiers of wooden bleachers supported on heavy wooden beams; the massive interior staircases were also constructed of wood. At the center of the amphitheater was an oval arena about 230 feet by 150 feet where gladiators fought wild animals, or each other, to the death. The gore of combat was absorbed by the sandy floor, which was sometimes tinted with cinnabar to further mute the bloody appearance.


The glory days of the Roman Empire came to an end in 276 when Germanic tribes swept into Gaul and set fire to most of the country. In Burdigala, the amphitheater with its wooden interior caught fire quickly and was said to have burned for two days. Following the attacks Burdigala contracted to two-thirds of its earlier size and fell back behind massive new defenses, 36 feet high and 15 feet thick. Much of the material for those walls came from the abandoned amphitheater.

Time quickly erased all memories of the original building. Describing life in Bordeaux only 50 years after the invasions, Ausone, who owned substantial tracts of land only a short distance from the former amphitheater, failed to mention it at all.

The building began to be called “Palais Galien” during the Middle Ages. Many legends were invented to explain the existence of the ruins, but the most widespread concerned Emperor Charlemagne. As a young man Charlemagne had fled his father, Pepin the Short, and gone to fight for King Galafre of Toledo. There he married the king’s daughter, Galiene, and, after Pepin’s death, Charlemagne returned with her to become king of the Franks. For centuries it was believed that Charlemagne had constructed a magnificent palace in Bordeaux for Galiene, and that the ruins outside the city walls were the remnants of that building.

In the 16th century scholars recognized that the masonry fragments were of Roman origin. This gave rise to a new legend, when they logically, but mistakenly, determined that the amphitheater had been constructed during the reign of Gallien, the emperor of Rome from 250-260 A.D.

From the Middle Ages the site was largely abandoned. Located away from the city center it became the haunt of thieves and prostitutes, and later was used as a garbage dump. In 1793 the city of Bordeaux, desperate for money, carved the surrounding area up into building plots. It’s at this period that the development of the neighborhood began and with it a renewed scientific interest in the ruins. The amphitheater was classed as a Historic Monument in 1840 (1840! Most American monuments hadn’t even been built when this baby was recognized as historic.) and the first program of stabilization was undertaken in the 1880s. Recent excavations have concluded that the amphitheater was constructed between 100-150 AD, not in the early third century as had been believed.

These walls have been inspiring writers, painters and historians for hundreds of years. As early as the 16th century E. Vinet noted that the ruins had "always given people much to dream about." Palais Gallien reminds me of architect Daniel Burnham's admonition to "Make no little plans; they have no magic to stir men's blood." Obviously it's a concept that the Romans understood pretty well. 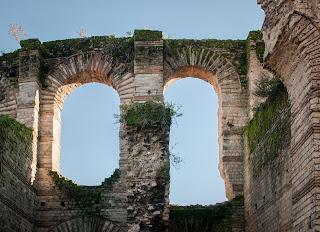 For more information on the subject, in French, see:
http://woozwoo.chez.com/palaisgallien/fchronologie.htm
The following site has a cool video of the ruins:
http://www.aquitaineonline.com/tourisme-sud-ouest/histoire-traditions/le-palais-gallien-de-burdigala-a-bordeaux.html
Posted by Unknown at 7:44 PM